Graveyard Shift: A Night at WRUV 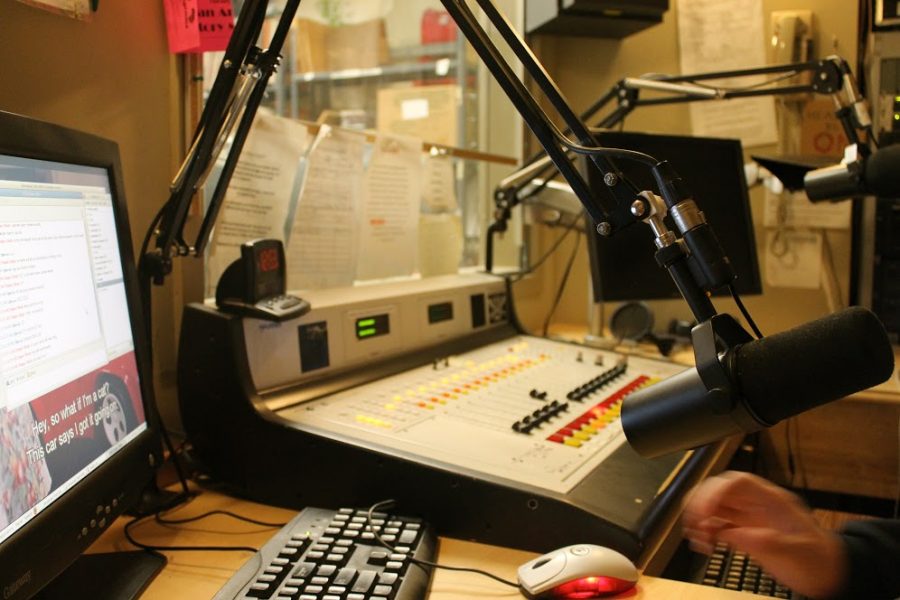 Graveyard Shift: A Night at WRUV

Because of the WRUV graveyard shifts, the Davis Center is the UVM facility that never sleeps.

The graveyards, late night shifts reserved for new and training DJ’s,  are a mixture of scary and fun, said first-year Ashley Claude.

Though being in the Davis Center late at night can be a bit daunting, especially for a student who knows how lively and active the place typically is, there is a sense of liberty that comes along with the experience, said junior Wren Tuten, who has just recently completed her last graveyard shift.

“You’re alone with the music at an intimate time,” Tuten said.

Claude has been long done with her graveyard requirements, but still has a soft spot for the private, early-morning hours at Davis. “I loved having my own space to blare my own music and be able to dance and sing in the booth without various onlookers,” Claude said.

But there’s no denying the freaky factor. “When you’re incredibly tired, you start thinking you hear or see things,” she said.

First-year Jack Lustig, whose show “How Much Art” airs every Wednesday from midnight to 2 a.m., doesn’t mind the time.

“I get to be more liberal with what I play because I know not a lot of people tune in,” Lustig said. “It also cuts out the stress of having to answer the phone.”

The late night factor, however, doesn’t stop friends and family of the DJs from listening.

“It means more when people tune in at this time, like calls from my mom listening next to my dad snoring in bed,” Tuten said.

Her brother, works late nights as a restaurant manager in Key West, and often calls in or gives feedback. “It makes the whole experience much more personal and special,” she said.

Similarly, Claude said her biggest and most dedicated fan is her grandfather, who “usually wakes up in the middle of the night anyway.” On top of that, Claude’s friends and family in different timezones often listen, sometimes using WRUV’s “Chat the DJ” messaging feature to mess around with her.

Lustig’s friends from his hometown of Washington, D.C. often call in, and it’s not uncommon for him to put them on air to tell a joke. During songs, he’ll even FaceTime with people to fill the silence.

Even if the phone lines are quiet, filling the time isn’t a problem.

“I always dance to the songs I play, with my boyfriend or by myself,” Tuten said.

Looking for facts to share during the on-air segments also keeps her awake. “You know I like the gross facts,” she said to her listeners. The facts Tuten shares range from strange biological nuances to the odds of getting struck by lightning while driving.

“I just love having a conversation with all of Burlington,” Tuten said. Having a show late at night or early in the morning means she can have her conversation without a script or unnecessary stress. This is likely why she said her personality shines through so clearly.

Though Lustig chooses to limit his on-air time as much as possible, he manages to make the most out of it. On top of sharing local weather and the most recently played songs, Lustig broadcasts a wide variety of news stories, like updates on the baby panda at the National Zoo and information about the latest maple syrup crisis in Vermont.

Because the Davis Center closes at midnight, few souls wander past the studio. But between 1:30 and 2:30 a.m., the cleaning staff  passes by while cleaning the floor.

She also said the is quiet in an eerie but also peaceful manner.

For some, the late night factor definitely has an influence on what is played.

“My immediate interest was always to play something soft and chill because I was so tired, but I would end up playing more rock heavy stuff to avoid falling asleep,” Claude said.

“If I aired in the afternoon, I probably would play less metal,” he said.

Tuten said she loves to play dance and sentimental music, but not with the intention of keeping her awake. She said her set will most likely be the same once she plays afternoon slots.

“The music I play depends more on the mood I’m in, not so much time,” Tuten said. But she can’t deny that there will be more stress involved, considering more people will be listening.

DJing late at night affects the whole day leading up to it. Lustig relies on caffeine, whether in the form of coffee or Earl Grey tea.

“Honestly, I’m not sure what percentage of my blood is still blood at this point,” he said.

Tuten and Claude both prefer taking naps before their shifts. “I definitely tried to plan my day around the graveyard a little bit, and usually went to bed sort of early so I could wake up a few hours later,” Claude said.

It can be difficult to imagine who tunes in at such late hours, but Tuten said she imagines it is most likely a combination of truck drivers, insomniacs who turn on the radio as a last resort to fall asleep, and her mom.

There are aspects of the graveyard shift Claude misses.

“Although it was very difficult to get out of bed at two in the morning and bike in the rain to the Davis Center, I kind of miss the adventure of it,” she said. “It was the kind of miserable you could laugh about.”

Although Tuten has only just recently ended her graveyard shifts, she anticipates missing the intimacy. Plus, listeners are more accepting of mistakes at 2 a.m. than 2 p.m., which makes the experience feel “safer and more fun,” Claude said.

But as she is studying to be a nurse during the night shift, Tuten said she knows there is no escaping the time slot, but this is a reality she is okay with.