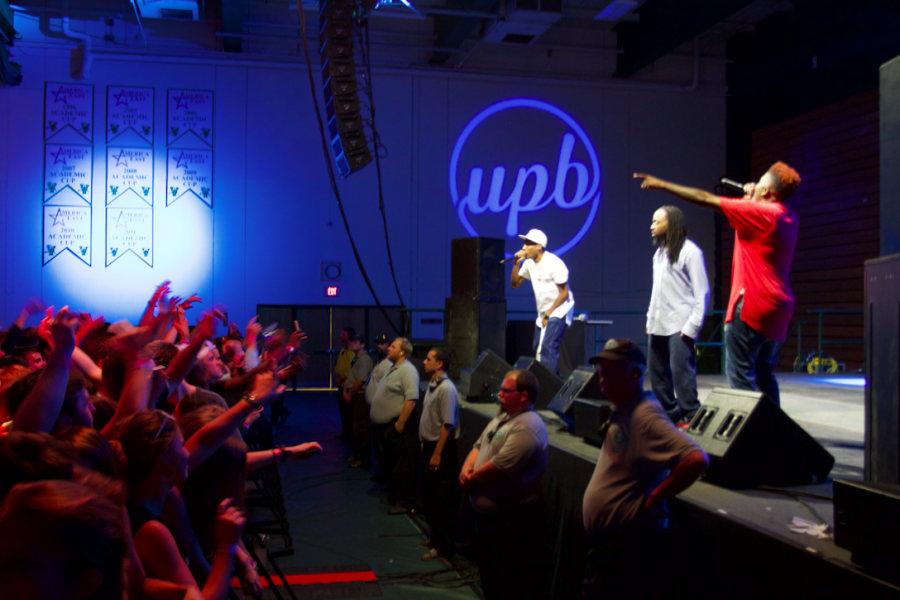 In the Harris-Millis dining hall last week, I overheard a snippet of conversation above the din of the crowd.

“Are you going to see the Ying Yang Brothers?” asked a voice directly behind me.

“Nah, they’re, like, outdated,” said the voice’s counterpart. Both voices had the lilting, spliff-cured huskiness that often indicates an intense and unironic appreciation for Kid Ink. Instinctively, my hand moved toward the hot ceramic dish of macaroni and cheese sitting on the table in front of me, which a conscious effort prevented me from tossing blindly over my shoulder.

Let me explain: At the age of fourteen, I owned a burned CD whose tracklist was as follows:

Those two songs, which I’d been requesting to no avail at local radio stations for several months prior, had come to my attention through slightly unusual channels. One of my dad’s best friends from high school had gone on to work in the adult film industry. At a related event that the two had attended together, the Ying Yang Twins had performed, and my dad returned home with a certain chorus stuck in his head. I didn’t believe a professional rap group would urge their audience to “shake it like a salt shaker” until I heard it on a Boston-area radio station shortly after.

“Get Low” appeared in a back issue of Spin that I must have read twenty (or “fifty-’leven”*) times. The issue focused mainly on early ‘00s indie favorites like Interpol and The Hives, but also included an exhaustively detailed history of the goth subculture and, most importantly, a glowing recommendation of that “spectacularly vulgar hit.” Once I’d heard “Get Low,” I couldn’t imagine why any of my peers preferred Weezer.

Nearly a decade later, when UVM announced that the Ying Yang Twins were performing at FallFest, I was incredulous. It had to be a joke. Surely no would-be Burlingtonite would have requested this rowdy Atlanta crunk group. Maybe Atmosphere would arrive wearing Ying Yang Twin masks, and all the fans of Real Lyrical Hip-Hop would rejoice as their enlightenment remained intact.

The Twins’ schedule was tight, so I couldn’t get an interview with them. There was no opportunity to see beforehand whether they were real, or to ask whether they still lived in the house with the “ocean room” they’d shown off on MTV Cribs, or what had happened to their three pet fish, “Kudzu,” “Fuck You,” and “Money Green.” Nor was there a chance to ask them whether they’d ever be open to a collaboration with Kanye West or French Montana, both of whom they claim appropriated their “Haaaanh” ad-lib.

This initial disappointment gave way to exhilaration when the Ying Yang Twins finally stepped onto the FallFest stage. There had been a couple of opening acts and a bunch of Future-heavy dance medleys before them, but I was reassured to see that most of the audience had their priorities straight.

When the Twins emerged, chanting and gyrating as they had years ago, the already excited crowd lost its collective shit. Smoke rose in columns from the densely packed crush of people. Any doubts I’d had about the student body’s appreciation for Kaine and D-Roc evaporated above the thronging, pulsating mob.

The Ying Yang Twins are known for their featured verses just as much as for their own tracks. Songs like “Get Low” and Bubba Sparxxx’s “Ms. New Booty” might as well belong to the Twins; likewise, even songs with high-profile features, like the Wyclef Jean-assisted club anthem “Dangerous,” sounded no worse without their guests onstage. A large, vocal percentage of the audience knew most of the hooks and plenty of the verses, and shouted along gleefully.

The crowd was packed tightly, and moved furiously to each deafening composition. Groups of dancers formed, sometimes at odds with one another, and at several points I had to maneuver my way through clusters of people who were moshing and twerking at the same damn time. Kingbread kept materializing several paces away from me; a tallish guy in a Donald Trump campaign hat (“Make America Great Again!”) drifted in and out of sight, his head bobbing and vanishing among the rising human tides.

Unfortunately, attendees reported two instances of violence during the show. One woman was escorted from the crowd by her male companion and a security guard as things got particularly tumultuous. An email alert sent the following day to UVM students indicated that she had been sexually assaulted by an audience member (described as “a black male, approximately 5’ 8”- 5’ 9” tall with with a medium build, a muscular face, and an angled jaw”). A later alert described a similar assault on a male concertgoer by “an Asian man between 5’ 4” and 5’ 8” tall.”

Despite these occurrences, the concert continued; luckily, no other individuals appear to have been harmed during the event.

Kaine and D-Roc, it should probably be noted, are 37 and 36 years old, respectively. This is no longer particularly old for a rapper; most Wu-Tang Clan members are in their forties and can still put on a high-energy show. It is, however, a point at which a change of direction is sometimes necessary. The track “Thundercat,” a collaboration with EDM artist Pyramid Scheme, may be the Twins’ only concession to this idea. “Thundercat” makes sense when considering that their contemporary Lil Jon and the more recent Atlanta rappers Waka Flocka Flame and Trinidad James have also made forays into the genre.

The energy the Ying Yang Twins displayed certainly did not disappoint. Their body language is at once comical and compelling; they pace the stage with frenetic vigor, shuffling and stomping, shaking their hips and thrusting their elbows outward as they sway bawdily to bass-heavy beats and encourage their audience to do the same.

Their vocals, which alternated between guttural growls and high-pitched nasal blares, were true to my memories of their heyday. Many rappers, especially those who perform a lot of party songs, are not particularly good in concert because they shout their lyrics over a vocally complete backing track. The Twins, thankfully, do no such thing.

After the concert, I boarded a clamorous off-campus bus and made my way downtown, content to have finally seen D-Roc and Kaine and, having done so, reached a milestone I’d been waiting the better part of a decade to achieve. The only song from my formative years that they hadn’t played was “Jigglin’;” having that song on autoplay had somehow been the least embarrassing aspect of my Myspace page as a high school freshman. I didn’t really mind, though. The Ying Yang Twins had come to Vermont. I guess now I’d better work on freeing Gucci Mane from prison in time for SpringFest.