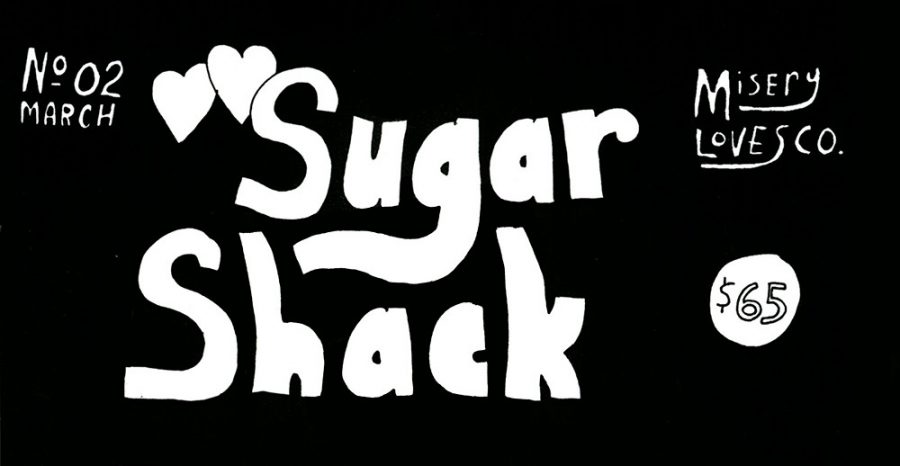 That figure doesn’t factor in the four gallons of syrup that chefs Nathaniel Wade and Aaron Josinsky also used in preparation for the ticketed private dinner, which spanned 11 courses and contained numerous nods to traditional Quebecois food while retaining, and at times topping, the typical Misery supper menu’s no­-holds-­barred experimental charm.

“When you go to southern Quebec,” bartender Mike Dunn said, “If you go to the sugar houses there around this time of year, they do dinners like this, where it’s a celebration of maple, and there are consistent flows of food … always way too much.”

Vermont shares Quebec’s enthusiasm for maple­­, but the Quebecois, having inherited a storied feasting tradition from local fur trappers and the Abenaki before them, generally have us outpaced in terms of sheer, gleeful gluttony.

[dropcap style=”normal or inverse or boxed”]N[/dropcap]ot so at Sugar Shack. The meal began with a couple of yeasty, deliciously plush rolls; these were accompanied by mixed pickled vegetables, mustard, maple syrup and both kosher butter and a slightly smoky whipped lardo.

That plate was quickly followed by one bearing c​hicharrones, o​r fried pork skins, dusted with espelette pepper; buttery, dense foie gras truffles; and thin slices of remarkably tender, well ­balanced ham that my photographer and I were told had come from a very young pig named Ladybug.

Next came a small glass of maple sap reduced by 50 percent, which we were encouraged to sip before consuming pale peach­-colored cups of a sea urchin panna cotta to which some sap reduction had also been added.

The urchins’ creaminess and delicate briny edge were smoothed together by soft­spoken maple undertones. More seafood soon appeared; as the “Superfly” s​oundtrack played overhead, we were given wild yeast b​lini​ topped with cured salmon, trout roe and maple creme fraiche.

It was then that Sugar Shack began in earnest. Slices of t​ourtiere, ​a hearty Quebecois pork pie whose deeply browned lard pastry had come from the nearby Misery Loves Co. Bakeshop, arrived alongside a slaw of turnips, red cabbage and beets tossed with hot maple vinaigrette. Both were delicious, but the slaw proved particularly helpful as more meats appeared.

Double-­fried quail, whose preparation I’d been watching eagerly from our kitchen side table, was terrifically crisp and made for excellent finger food. The tiny birds came dressed with a maple shoyu sauce whose smokily salty flavor was edged with a resonant sweetness.

[dropcap style=”normal or inverse or boxed”]B[/dropcap]akeshop employee Logan Bouchard, who had temporarily resumed his past position as a server for the event, said that his favorite dish was either the quail or the wonderfully debauched pig’s trotter dish that followed it.

For the record, that delicious dish consisted of trotters that had been disassembled and reconstructed around liverwurst stuffing, then seared and served over maple baked beans with ham broth and blood sausage.

“Aaron makes amazing liverwurst. It doesn’t have that metallic minerality that a lot of liverwurst does. And the trotter, there’s so much collagen in there that you can put anything in it and seal it back together, and it doesn’t look any different,” said Bouchard.

Speaking of collagen: the meat of young pigs is simply brimming with the stuff. It makes for a juicy, almost gelatinous cooked product. For the next and final meat course, Josinsky and Wade had removed the bones from a suckling pig’s body and rolled the meat into an approximate cylinder with the pig’s intact head at one end.

They had then roasted the pig until its skin, which crackled loudly under Wade’s carving knife, had reached a golden sheen. The resulting pork, complemented by a clove­-scented stuffing, was impeccably tender.

To announce the roast pig, Josinsky began banging a saucepan with a wooden spoon and strode into the dining room. He was greeted by applause.

After a brief post­-pork lull, dessert service got under way. The first and most substantial dish was a creamy maple sugar pie, a nod once more to Quebecois tradition.

[dropcap style=”normal or inverse or boxed”]A[/dropcap]fter that came a plate of cream puffs, hard candy and fudge, all maple-­based and deeply satisfying.

Sugar Shack’s final course, appropriately enough, was sugar on snow. Our server brought us a bowl of shaved ice and poured hot maple sugar, thickened just past the point at which it could have been called syrup, on top. The combination was simple, straightforward and refreshing.

After dinner, Bouchard and I chatted about upcoming Misery Loves Co. events amidst the slow, churning riffs of stoner metal band Sleep’s monolithic smog opera “Dopesmoker.” Those who missed out on Sugar Shack will be pleased to hear that, “probably sometime in early May,” MLC will bring back its Café Corretto evenings at the Misery Loves Co. Bakeshop in Winooski. This time around, in addition to cheese, charcuterie, baked goods and amari, there will be a focus on increased raw bar offerings as part of a collaboration with seafood distributor Wood Mountain Fish.

MLC will also be participating in Winooski’s art and music festival Waking Windows, which will take place May 1­3.

In the meantime, they’re open for brunch, lunch and dinner. Check them out sometime at 46 Main St. Winooski, VT .