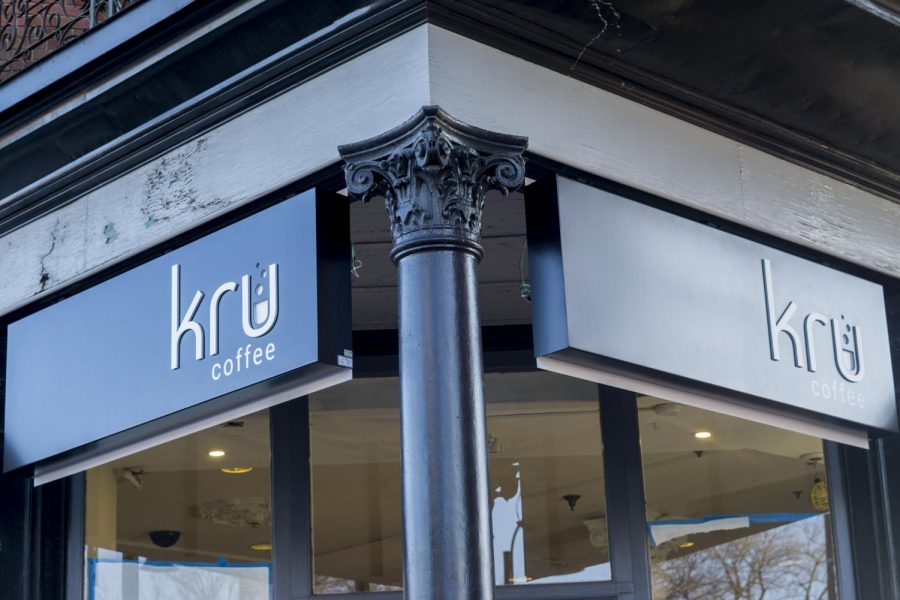 Signs with the Kru Coffee logo hang on a Church St. building, Jan. 29. “Kru” is short for “Krucible,” the full name of the brand.

Kru Coffee hopes to prove that supporting farmers pays off all the way to the coffee cup.

The coffee company, based out of Saratoga Springs, New York, is setting up a second location at 2 Church St.

Co-owner Kyle Brock plans to have the doors open by Feb. 18.

“We have a lot of roots and family connections in Burlington,” Brock said. “We’ve always had an interest in [a Burlington location] without somebody to run it. When Lisa Weber, my sister-in-law, said she wanted her and her husband to manage the new spot, everything kind of fell into place.”

Brock, alongside his wife Kristi Brock and her brother Ryan Miller, opened Kru Coffee in Saratoga Springs in August 2016.

Now, Weber will manage the Burlington cafe with help from her husband Tommy, Brock said.

“It’s a total family operation,” Weber said. “I’ve been in the service industry for 15 years, but this is my first time managing. I am excited to try my hand at it.”

Weber hopes to make most of the pastries in house, including homemade doughnuts, though Brock thinks it will be mid-March before the kitchen is fully operational.

In designing the space, the vibe Weber is going for is eclectic but cozy, she said. In addition to couches and other traditional cafe seating, there will be a long community table.

As a Q Grader, Rock is responsible for both purchasing and roasting all of the coffee that comes through Kru, Brock said.

His certification also means that he can inspect the unroasted coffee and understand which roasting techniques will highlight specific flavors.

“Luke is critical to the business,” Brock said. “He’ll continue roasting in Saratoga and bringing the coffee up here… at least until things get big enough to warrant putting in a roaster somewhere close by.”

In addition to increasing their bulk supply, he said Kru hopes to strengthen the relationship they have with smaller farms.

“I think it’s important for people to know that that is a central focus of ours,” Brock said. “We want to empower the coffee farmer.”

While certifications like fair trade encourage equitable pricing between buyers in developed countries and producers in developing countries, the certification is unreliable in regards to helping individual farmers, according to a 2011 article by the Stanford Social Innovation Review.

“In Fair Trade, the money ends up with the processor,” Brock said. “We made the decision really early on. If we’re going to do this, we are going to try to be sustainable with it, all the way to the farmer.”

Brock and his family also own a small coffee farm on the island of Hawaii, and his firsthand experience with growing coffee without the use of pesticides makes him appreciate the farmers that have allowed his business to grow.

“It’s hard work, so I have a real appreciation for it,” Brock said. “I’ve been there and felt the frustration of having just picked all of this coffee, and less than half of it is never going to end up going anywhere.”

“As a consumer, I am not always careful enough about where I source the goods I purchase,” Gold said. “When a business does that, I feel better about supporting them.”

Gold also highlighted the importance of atmosphere at a coffee shop. She does not consider herself a heavy coffee drinker, but she chooses to do much of her work at cafes because the ambiance helps her to focus.

“It’s not like a library, where you’re just there to do work and there’s an obligation to be quiet,” Gold said. “It’s like you’re in somebody’s living room. You can chat, or you can read, or you can be working.”

In downtown Burlington, coffee shops are not hard to come by, but Brock does not think that the market is oversaturated.

“We’re not here to replace anyone,” Brock said. “It really is about quality for us. We have vertically integrated, from growing and roasting, to distribution and retail sales, and people will come to recognize that we’re more than just a coffee shop.”