As both an omnivore and a nitpicky jerk, it’s always bothered me a little to be called a carnivore.

The confusion, if that’s what it is, likely stems from the fact that I eat meat with obvious enthusiasm. I’ve heard the term directed at other people who eat meat, usually by those who do not.

Unfortunately, the use of the term in this context presumes that vegetarianism and omnivorism are opposites; that is, if you consume animal flesh, you must be defined by that habit and not by the multitude of other foods you eat on a daily basis.

Conversely, those who choose not to eat meat or animal products are all too often defined by their dietary taboos when the things they actually prepare and consume are a much more interesting topic. I suppose what I’m getting at here is that, yes, I eat animal products, and there’s a good chance you do too, but that shouldn’t stop you from trying a meal at Pingala Café in Burlington.

Pingala is a vegan restaurant overlooking the Winooski River from the Burlington side. The comfortable, wood-paneled space is not especially large, but its superb lighting and high ceilings give the impression of greater capacity.

Those ceilings’ altitude is put to good use; the menu stretches far overhead and, depending on a new diner’s outlook, could appear either daunting or reassuringly thorough in its scope. In any case, the employees are patient and eager to offer recommendations.

Readers familiar with vegan cuisine will recall that a large percentage of it can be categorized as:

a: only incidentally vegan, or

b: only incidentally food.

The latter category, which contains such stomach-churning nonsense as Soya Kaas American Cheddar Style Slices, is mercifully absent from Pingala’s offerings. Instead, the restaurant has chosen to emphasize fresh, unprocessed ingredients coupled with the occasional nod toward (but by no means a reliance upon) animal product substitutes. 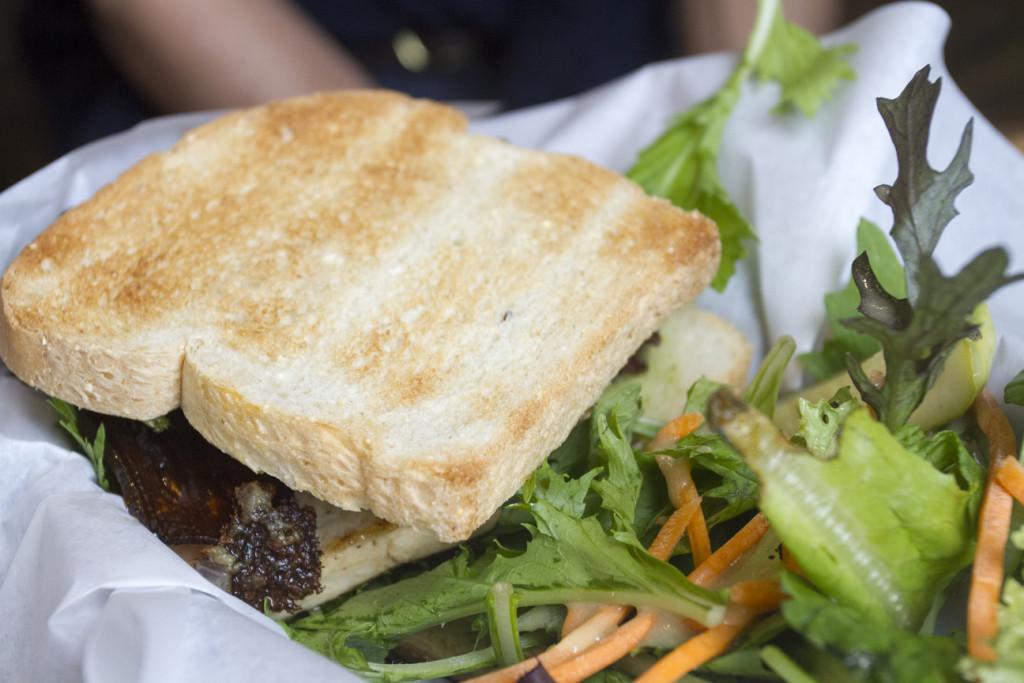 Pingala’s “California Club” sandwich, for instance, stacks smoothly satisfying baked tofu atop avocado mash, red onion and kale pesto. The combination of textures and flavors, especially in conjunction with crisp, paper-thin slices of smoky eggplant “bacon,” bore much more than a thematic resemblance to its more traditional non-vegan equivalent while retaining its own novel and pleasant identity. As with most good club sandwiches, it was served on firm, lightly toasted white bread. A side salad of mixed greens with a pleasantly tart orange-hued vinaigrette was also provided.

The day’s special, latkes with applesauce and cashew “sour cream,” was as good a rendition of the dish as I’ve had in recent memory, although I’d have preferred it if the textbook golden-brown crust had penetrated just a little more deeply into what could have been a more firmly textured interior. The pancakes were nicely seasoned, however, and the applesauce had a certain earthy tang that complimented them and brought out more of the cashew cream’s slightly nutty flavor than I’d probably have otherwise tasted.

One of my dining companions, who had been to Pingala before, recommended the “Loaded Nachos,” a generous portion of excellent corn tortilla chips piled high with what the menu describes as “black bean salsa, diced tomato, avocado, red onion, cilantro, cheesy sauce and cashew sour cream.” 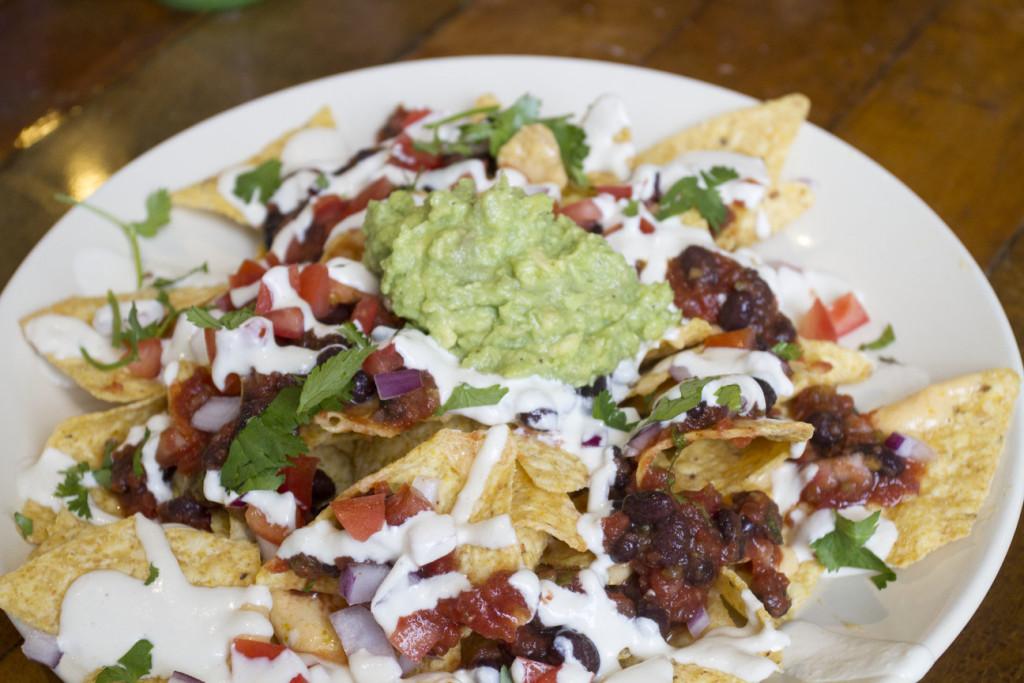 The salsa and other vegetables were sublime from a textural standpoint and tasted wonderfully fresh. I’m not sure exactly which was “cheesy sauce” and which was cashew cream; there appeared to be only one substance, moderately thicker than what was on the latkes but still fairly liquid in consistency. It tasted a bit like cashews, rather unsurprisingly, but more interesting was the hint of a taste not unlike that of the soft Mexican cheese queso fresco. Overall, the sauce(s) certainly contributed to the dish, but in a subtle way that (as with the latkes) might have been easy to miss if we hadn’t read that they’d be there.

The subtlety of Pingala’s dairy substitutes is, for the most part, an asset. Our meal would certainly not have been as good if we’d had to navigate around the forcefully bland, processed flavors of any commercial analogues. Pingala’s primary strength, aside from obvious technical aptitude, is their marriage of largely unaltered natural flavors and textures with only those others that compliment them. Often, a dish is just as good (or, more excitingly, altogether different) from its non-vegan counterpart; sometimes, as with the smoothies they blend with coconut milk in place of yogurt, it is even better.

Whether you choose to follow a vegan lifestyle or are simply of a mind that good food should not necessarily be defined by absences or inclusions, Pingala’s worth a visit. You’re likely to find, as I did, that it merits many more. This food is excellent in its own right, no matter what your diet typically includes. 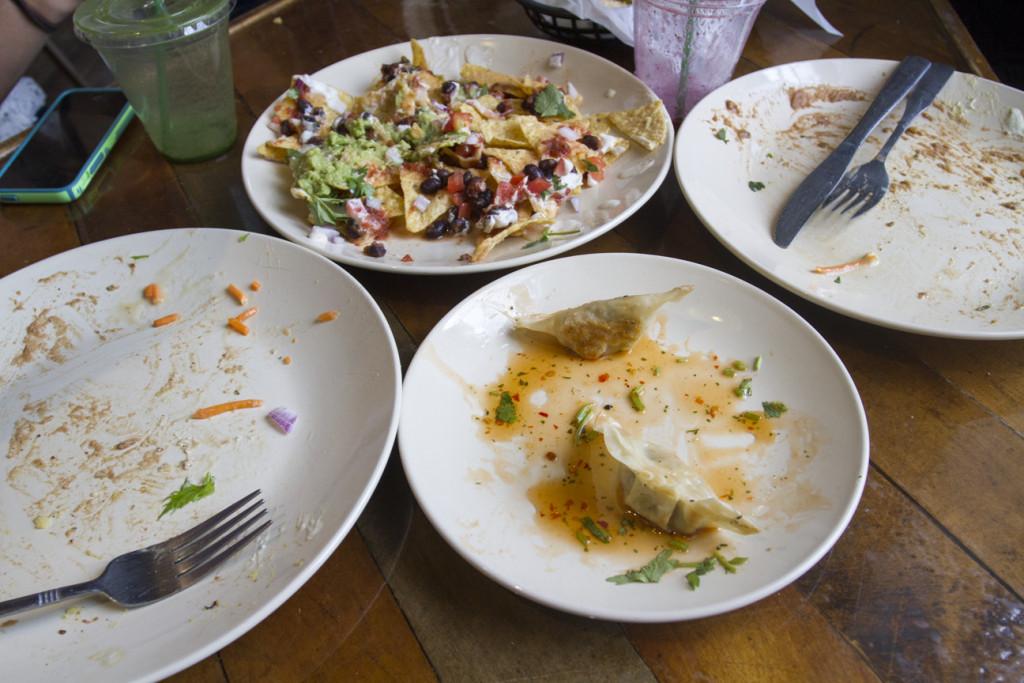