No place like home: A look at UVM’s dorm party culture 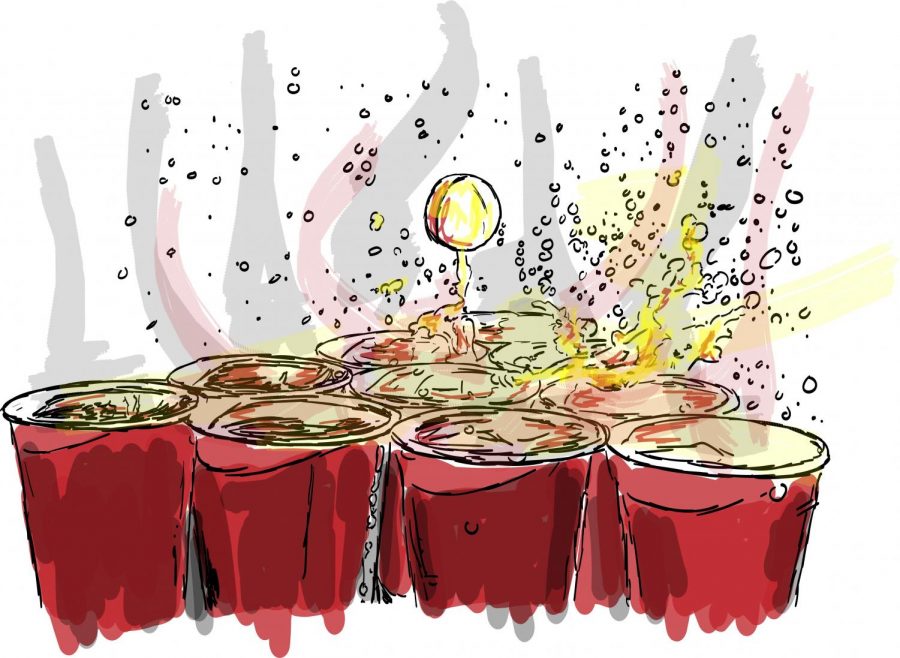 The neon glow from LED strip lights illuminate a pong table, and every knock on the door throws the room into anxious anticipation of the dreaded, “RA on duty.”

Vaguely recognizable faces, uncomfortable small talk with the kid who sits four rows behind you in your sociology class and mysteriously sticky floors are just a few defining characteristics of UVM’s dorm party culture.

These parties may be lighthearted, but they can come with consequences.

UVM students who misuse and abuse alcohol “constitute a threat to the educational mission of the University, a violation of federal and/or state law and a violation of University policy,” according to UVM’s website.

Sophomore Matt, a pseudonym, and his suitemates are infamous for hosting parties in their room most weekends.

“We know that there could be consequences,” Matt said. “We try to be careful and usually have people who warn us if we have to shut it down.

“We understand the risk but we don’t really have any fear big enough to make us stop.”

More importance is placed on the social aspect of the dorm party than limiting the quantity of students in the space.

“We have a good setup in our room, so it’s nice to have people over,” he said. “We invite our friends, but they bring their friends, so we end up meeting a lot of new people.”

The nonchalant perspective of hosts extends to attendees as well.

Sophomore Samantha, a pseudonym, enjoys the convenience and accessibility of dorm parties and attends them regularly.

“I don’t really think about [getting caught] at a dorm party,” Samantha said. “Like I’ve heard horror stories, but once 11:30 p.m. comes around I’m out anyway.”

The culture of drinking and use of illegal substances in dorms persists despite the inherent risk associated with it.

The University poses weighted threats such as “a range of disciplinary sanctions, including suspension or permanent separation from the University, in addition to potential criminal sanctions,” according to UVM’s website.

Though these policies are strongly upheld by UVM’s administration, some students continue to explore their recreational options in residence halls.

Junior Resident Advisor Isaac, a pseudonym, does not share his peers’ enthusiasm for dorm parties.

He provides a sobering approach to the subject, grounded in his accountability for the students around him.

“You really can’t have [a dorm party],” Isaac said. “The rule is that there can only be [a maximum of] six people in the room, and obviously you can’t be loud or drink or use drugs.”

RAs are responsible for reinforcing UVM’s policies and procedures in the dorms and ensuring the safety of their residents.

They are in charge of maintaining a healthy and respectful environment, and sometimes that entails putting an end to dorm parties.

“I understand why people do it, but it makes my job harder,” Isaac said.

Despite efforts to combat underage involvement with illegal substances, this rowdy pastime does not seem to be suppressed.

For many students, the intimacy and accessibility of dorm parties provide an environment that’s worth the risk of getting caught.

Matt’s parties exemplify the spontaneity and carefree nature that pull so many UVM students away from UVM’s rules against drinking in dorms.

“One time, we were playing Fear Pong, and my friend had to switch clothes with one of the girls,” Matt said, remembering the image of his friend in a crop top and leggings.

“It’s much different from a frat party, where there’s people you don’t know in a dark basement,” Samantha said. “I mean, there’s not many opportunities for talking there.”

The foundation of dorm parties is their communal dynamic, where students can bond over a game of beer pong or the passing of a Juul.

Logistically, a dorm room can fit a limited amount of people. The lack of square-footage ensures a rare form of intimacy.

Many turn to dorm parties as a more safe and relaxed alternative to other forms of Burlington nightlife.

“My friend even came out [as gay] to me at a dorm party,” Samantha said.

Sophomore Veronica, a pseudonym, relates to the feeling of refuge fostered by parties held in the residence halls.

“Dorm parties are a more familiar environment than parties at random houses, which makes me feel a lot safer, especially since I usually know the majority of people there,” she said.

Veronica said that this level of familiarity also allows students to feel more comfortable with their appearance.

“There’s a lot less pressure to dress up for a dorm party,” she said. “They feel really laid-back and casual.”

Instead of getting dressed up, jamming the squad in an Uber and heading downtown, students can simply throw on a sweatshirt and walk down the hallway.

The backlash and dangers surrounding partying on-campus only seem to bolster its popularity.

As long as UVM’s dorm culture retains its carefree mindset and plenty of Pabst Blue Ribbon, the party will go on.