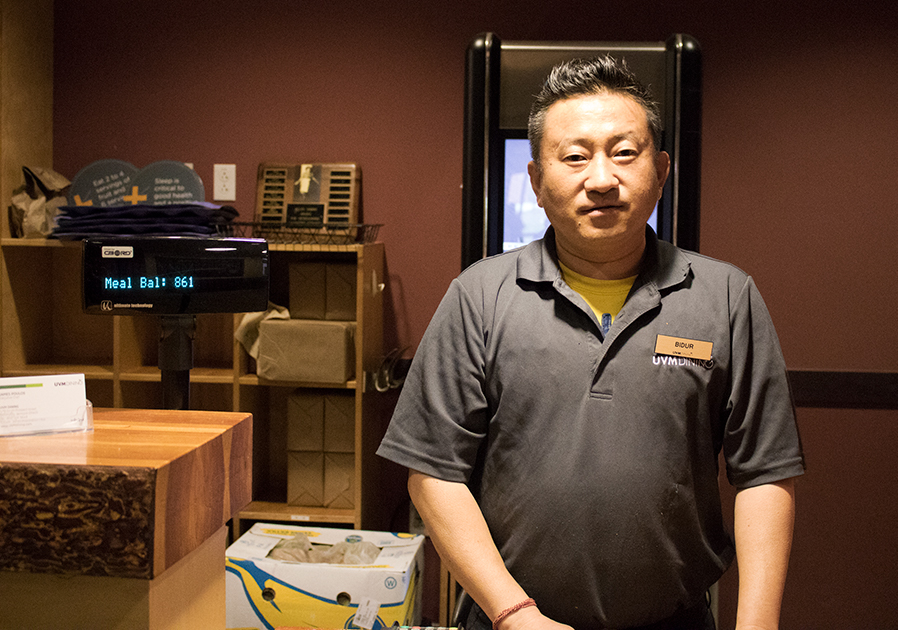 I could barely believe it. After the story I had just received, my perception of the man standing before me had changed completely.

Although I had known Bidur Rai for months as the cashier at Simpson Dining Hall, I had never asked him anything beyond, “How’s it going?”

After inquiring about how he started working at UVM, the story I received had me baffled me as to how I could have been so oblivious.

Meanwhile, students kept walking inside the dining hall, saying, “Hello, how are you? Have a good one,” never realizing that they were passing by such an inspirational man.

Rai has only been living in Burlington for three years. Before that, he was a refugee in Nepal.

Originally from the Kingdom of Bhutan in Southeast Asia, Rai had to leave his native country at age 15 because of strict dress laws designed to push out ethnically Nepalese people.

During his time in the refugee camp, Rai had to work hard, at one point taking the job of manager of a coal mine in India, about six hours outside of Nepal, between 2002 and 2007.

In his spare time, Rai trained and taught Shito Ryu Karate. Despite being a skilled fighter, he took a couple of hard hits during this period, Bidur said.

Smiling broadly, Rai pulled up his sleeve and revealed a scar on his forearm where it had been broken due to a kick received in a karate and kickboxing championship.

Moving his hair to the side, he showed me multiple scars on his forehead, sustained from fights where he had to resort to using his head instead of his fists.

But most shocking was when he raised his pant leg to show me an intimidating black brace. He had broken bones in his right thigh as well as his calf.

This, combined with back injuries, left Rai in a wheelchair throughout 2015.

He was unable to work, let alone walk, when he finally arrived in the States. His wife worked diligently to help the family, but the air hung heavily over them.

He described one summer afternoon when he watched his 3-year-old daughter fall and hit her head as he watched helplessly from the porch.

“She told me she just wanted to go out and play. She was pretending to cook food and make tea,” he said.

His daughter was crying at the bottom of the stairs, yet he, her father, was unable to walk down and pick her up.

Rai recalled people coming across the street saying, “What are you doing, can’t you see your daughter is hurt?” In such a state of helplessness, he was fearful his English would fail him.

Rai learned English while growing up, but said that he was ridiculed and told that he would never really be able to get by in America.

“They said it was impossible for me,” Rai said, “But I split up the word to I’m possible.”

With a lot of physical therapy and time, Rai eventually regained the ability to walk with the assistance of a cane. His next step to regaining his self sufficiency was to begin working.

Although he applied for the job of cashier at Simpson, his first few days of work actually took place cleaning dishes in the back. This task proved to be painful, and he felt dismayed at not being able to handle the task, he said.

He was soon moved to the front desk where he could practice both his language skills and his philosophy of spreading positive thoughts.

Sitting at his small dinner table, Rai leaned over and told me, “If you plant a mango tree, don’t expect it to grow the fruits of an apple tree.”

If negative energy is put out, you can’t expect positive things to come to you. So everyday, Rai sows seeds bearing his positive attitude.

One of the fruits of this positive attitude, took form in the Ubhauli Sakela, an event which took place at Battery Park April 28, where Burlington’s Nepalese population came out to perform native dances and serve delicious and spicy Nepalese food.

I attended a rehearsal for the event where kids and adults gathered together to learn about their native culture and simply have fun Saturday, April 21.

Rai and his friend Bishnu Khadka began this dance group in July 2016 with hopes of making the community more tight knit and preventing anyone from feeling alienated or scared of their new surroundings.

Seeing the prideful expression on Rai’s face and his daughter’s jovial smile when I arrived at the Ubhauli Sakela, it seems his efforts are paying off.

Rai hopes to do more events in the future, and continue to aid his community in coming together in such a new place.

Coming as far as he has, it is not so hard to understand why Rai always wears the smile that he does.

It is not one of simple satisfaction, but a smile that had been earned, worked for, and symbolizes the pride of endurance.