10 years later, no sign of DI baseball coming back to UVM 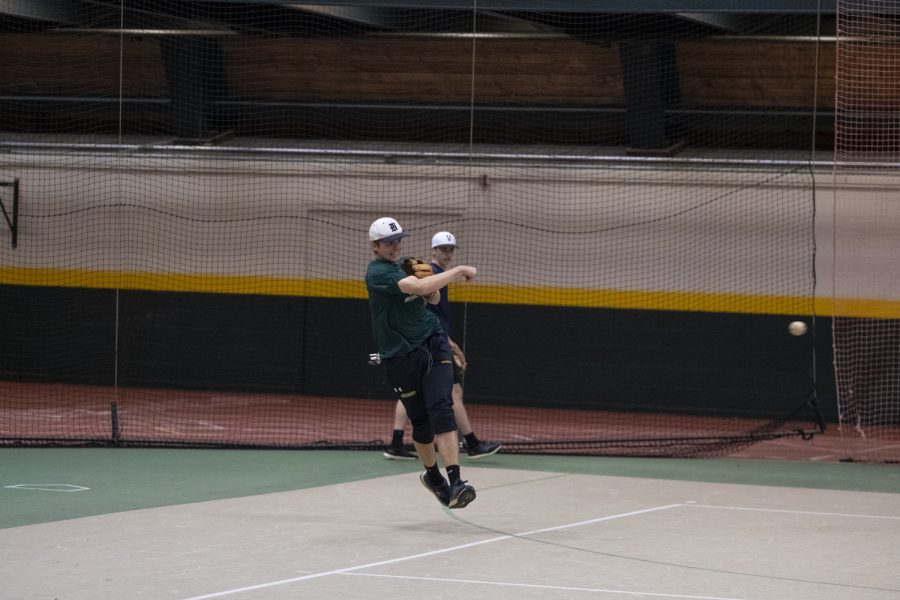 Junior Pat Brennan throws a baseball in midair during a club baseball practice, Oct. 17. Brennan is one of the 18 members of the team, according to UVM Clubs.

You could hear a pin drop after the 48 UVM Division I baseball and softball players were informed their teams were being cut in 2009.

After suffering from the 2008 recession the UVM athletic department had to make $1 million in cuts. This included cutting the varsity baseball and softball teams, each of which had budgets of $500,000, said Jim Carter, former UVM varsity assistant baseball coach.

“There was a lot of backlash, especially from alumni,” Carter said. “[They] led a charge and I led a charge.”

Carter formed Bring It Back in 2009 as a result of the backlash from various current players, notable alumni and the general student body with the goal to reinstate the men’s varsity baseball team.

Bring It Back is still active in bringing back the varsity baseball team.

Some of their notable documented accomplishments include multiple television and radio appearances, five meetings with the UVM athletic department, over 70 general meetings to date and most notably, approval to become a 501(c)(3).

Being approved as a nonprofit was critical to the group’s development. By becoming a nonprofit, the group is now tax exempt and donors can write off donations, Carter said.

While the group has had many successes since its establishment. They are now at a standstill due to the frustration of many amuni with the UVM Athletic Department, Carter said.

The reason for this plateau is because the University refuses to give any money to support the Bring It Back movement, Carter said.

As a result, outside companies and individuals are hesitant to donate large sums, as they feel the sport will not ultimately be supported by the school, Carter said

Right now, the nonprofit needs to come up with an endowment of at least $1 million to open the door to the prospect of reinstating the team, Carter said.

This amount has been significantly reduced from the $15 million endowment the previous athletic director, Bob Corran, originally told Carter would be needed. If this were to happen, baseball would be the only UVM team being endowed.

While the organization has made their voices heard on campus and beyond, athletic director Jeff Schulman said that there are no imminent changes coming to the varsity offerings.

“There are a lot of challenges to bringing back baseball. There are obviously some financial issues, and there are also weather issues. Also, we also need to make sure that we are equitable in our opportunities for men and women,” Schulman said.

If a baseball team were to be brought back, that would open approximately 30 more roster spots for men. Therefore, in order to remain in compliance with Title IX, 30 roster spots would also need to open for women, he said.

Title IX is a U.S. federal law that states that no person should be excluded from participation in or discriminated against under any education program or activity receiving federal financial assistance on the basis of sex.

Therefore, UVM Athletics would have to create 30 more spots either through reinstating the softball team or by adding roster spots to various existing women’s teams, he said.

Schulman was promoted to athletic director in 2016, but he was working in the department in 2009 at the time of the programming change.

He said he has had several conversations with Carter and other members of the Bring it Back movement, and he admires their work.

But Schulman said bringing back the baseball program is not on the radar.