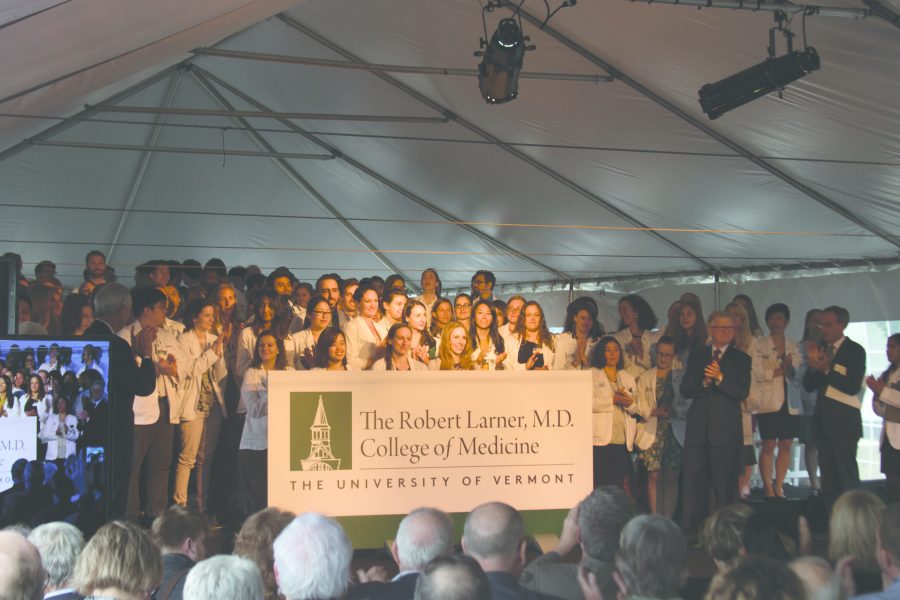 A record-breaking $66 million has been donated to the UVM Medical School.

President Tom Sullivan, along with members of the board of trustees, faculty and students of the College of Medicine, announced the largest gift in UVM history: a $66 million endowment by alumnus Dr. Robert Larner ‘39 and his wife Helen ‘42 at a Sept. 23 press conference.

In return, the University is renaming the college the Robert Larner, M. D. College of Medicine.

This is the first medical school to be named for an alum in the U.S. and the largest gift ever made to a public university in New England, according to the press release.

Speakers included Rich Bundy, president of the UVM Foundation, and Soraiya Thura, a third-year medical student and student trustee on the board of trustees.

Over 150 medical students attended the event.

The donation brings the Larner family’s total donations to about $100 million, with $95 million in the last 11 months, David Daigle, chair of the board of trustees, said.

Larner’s last donation was a $19.7 million and in 1985 he started an $8 million fund to help medical students pay their loans, according to an April 15 Cynic article.

This current donation is of an estate valued at $66 million.

Also in attendance at the conference were graduates of the College of Medicine as well as Vermont congressional and state representatives.

Larner and his family attended via livestream of the event from their home in California.

Larner said he is passionate about the medical school and wanted to give back.

“I give to the University of Vermont College of Medicine because the education I received here made everything great that followed in my life possible,” Larner said.

After Larner spoke, President Sullivan delivered a speech giving his thanks to the Larners.

“Knowing the passion and the love they [Dr. Larner and his wife Helen] have for this University, we were very thankful for their gift,” he said.

Thura said she was speechless.

“I couldn’t believe this was happening at my medical school,” she said.

“We were awed by the generosity and commitment he [Larner] was making in the future of medicine,” Bundy said.