A debate of a different kind: SGA takes presidential debates to live stream 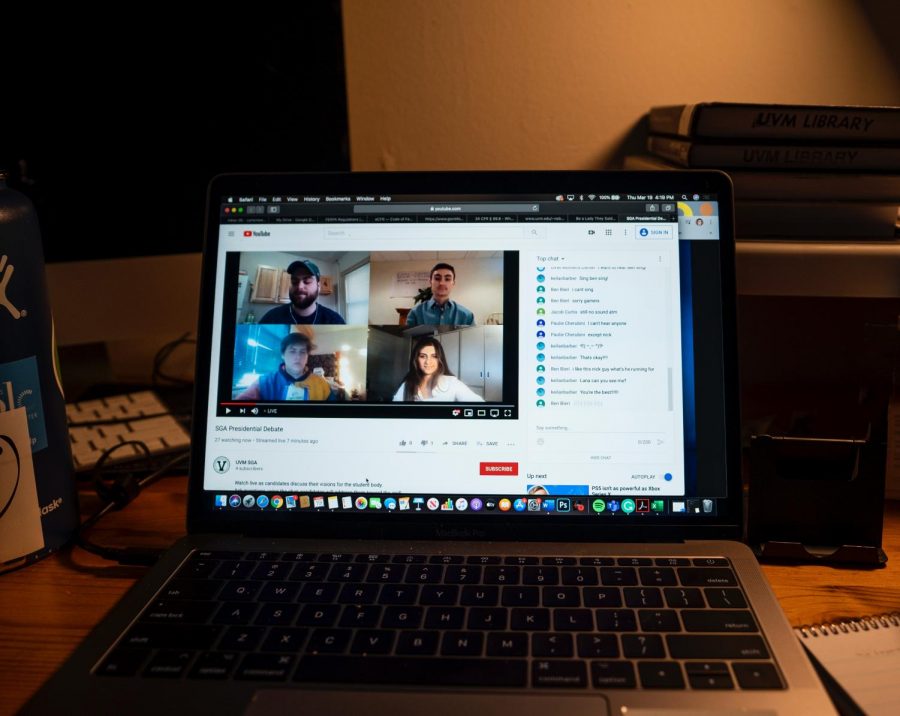 SGA attempted to keep things business as usual, despite a pandemic, with a virtual debate between candidates running for SGA president and vice president.

The first attempt at broadcasting included the video of the candidates, but the sound was not coming through. Smart had to text in some of his answers due to a bad connection.

Thirty minutes later, the debate was running again, this time, with audio.

Each candidate gave opening remarks and then had the chance to respond to five questions prepared by the SGA elections committee and some from the audience — a chat window off to the right of the screen.
Opening Remarks
Al-Namee and Lally, who are running on the same ticket for president and vice president, said their campaign is focused on student health and wellbeing, as well as the environment and diversity on campus.

Doherty and Parker, who are running for president and vice president, said their goal is to build up UVM to be a place for everyone.

Bieri, who is running for president, said he wants to unionize the student body, a main focus of his campaign.

“What we are advocating here can no longer be advocated for by a system that is so entrenched within the administration,” he said.

Smart, who is running for president, was unable to connect to the chat but responded to a couple of questions through text.

One audience member, pointed out Smart’s issues with connecting to the debate, highlighted a bigger issue in a time where all UVM classes are online.

But the candidates’ answers on how they would address the administration varied.

Lally, Parker, Smart and Doherty all said UVM should provide some compensation to students.

“You didn’t get everything that you paid for, and I think it’s unfair to pay for things that you are not getting,” Doherty said.

Bieri, who started a Facebook group full of resources for students staying on campus, said that the administration needs to focus on more of the immediate problems on campus, such as UVM Dining and residential access.
What do you see as the most pertinent issue to be addressed on our campus during your presidency?
Doherty and Parker discussed the issues with academics, highlighting their plans to establish a buy-back textbook program and increase study spaces on campus. They also discussed how many other issues, such as the timing of the dining halls, are affected by a student’s academics.

Bieri said students don’t have access to a system that allows them to pursue interests if they don’t line up with what the UVM administration wants, and thinks that we need a student union on campus.

Lalley said there needs to be more diversity on SGA to represent the student body, and that the Prism Center needs to be a permanent center.

Smart, who texted his answer, said the lack of resources for religion and mental health need to be addressed and SGA needs to rethink how they can use their resources to help them gain resources with these issues.
What initially drove you to consider running for this leadership role?
Bieri said in his numerous leadership roles he has seen students consistently being overlooked by the administration, which pushed him to run.

Al-Namee said being in a marginalized group she felt uncomfortable speaking up, and having people listen to what she had to say, and she doesn’t want any other student feeling the same way.

“I think it’s damaging to the morals that we arbitrate here at the University,” she said. “We are putting aside a lot of standards for more places just to focus on the image and ignoring what students feel and the support that they truly need.”

Doherty said that he wants to advocate for addressing the little issues on campus. SGA should be more of a service for all students, he said.
What do you see as SGA’s greatest weakness and greatest strength? How will you approach each of them?
Each candidate had a different take on the weaknesses of SGA.

Parker said the weakness lies with transparency and accountability.

“We intend to host more office hours outside of the office,” she said. “We want to do weekly update videos to the student body on all of SGA’s initiatives.”

Al-Namee said that the right voices are not being heard due to students not feeling comfortable to voice their opinions on campus.

Lally said as students they need more time to make different decisions in SGA, since they have a lot on their plate just like any other student.

Doherty said SGA is oftentimes working on projects that no one seems to care about, and discussed having a survey being put out to the student body asking what issues they want to see fixed.

Bieri said being connected to the administration is both a positive and a weakness, saying it prevents SGA from being an effective student government, and that things won’t get done if the administration doesn’t want it to get done.
What sets you, specifically, apart from the other candidates on the ballot? Answer in regards to your desired role, president or vice president.
Al-Namee said she is set apart by her identity as a female-identifying student, and Lally and her ideas benefit all students and a lasting foundation for years to come.

Doherty said he is willing to do the hard work and put in the time commitment, talking about his platform with Parker and how their ideas are for the students of UVM.

Bieri said he doesn’t want to be the president, he wants to be the last president and wants to be one of the people who makes a new government for students on campus.

Parker said they are focusing on attainable, smaller issues that students need, and discussed Doherty and herself’s experience on the executive committee as a strength since they know the system well.

Lally encouraged the audience to dig deep into the platforms of the candidates, and said that he is excited to continue to share Al-Name and his platform.

Doherty brought up the issue of sexual assault on campus, mentioning ideas that Parker and himself have developed, such as a phone hotline to a victims resource center.

Bieri said he wants to uplift every student on campus that brings forward ideas.

He also addressed the issue with sexual assault, and said he wants to investigate into Fraternity and Sorority life on campus and see how their sexual assult training is conducted.

Smart said he wants to set up a new level of action for the students on campus, and wants to serve them in the greatest way possible.

The next debate will take place at 6 p.m. March 25, and students can vote from the morning of March 26 until the night of March 27.