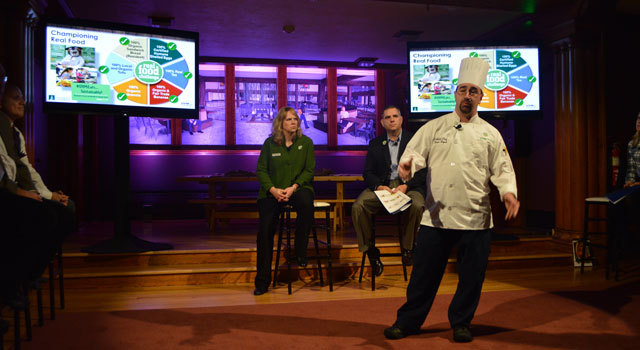 This summer, the current on-campus dining service contract will come to an end.

Both the current provider, Sodexo and Aramark will be competing for the 2015-2020 UVM dining services contract.

The two companies held open forums with a question and answer period to discuss their proposal with members of the UVM community Nov. 17.

UVM has decided to open up the bidding process to the student community and a board of electors.

“I believe change is good,” sophomore Ben Hamilton said. “I would definitely say that we could use some change in the quality of food, where we source our food and the overall ethical food choices for students here.”

During both open forums, representatives from the companies spoke about the their plans for the 2015-2020 contract.

Representatives from Aramark highlighted the fresh-take that they could offer to dining at UVM.

During their proposal, Aramark suggested that they would bring more local partners to the University and reevaluate how the University uses their dining spaces.

One idea Aramark has to maximize dining space at UVM is to add an outside entrance to the Cyber Café in the library. The added door would minimize the traffic backup during the day.

Both Sodexo and Aramark plan to bring in partners from the community like Vermont Bean Crafters, Vermont Soy and Pizza Verita.

During Sodexo’s open forum, the company’s representatives promised to keep moving towards their Real Food Challenge.

This will mean that 20 percent of food on campus will be “real” food by 2020, which is the year the five year contract will expire.

Melissa Zelazny is Sodexo’s regional dining manager and she talked about the movement towards more sustainable and healthy food.

“The Real Food Challenge provides us with the opportunity to change as the University changes,” Zelazny said.

UVM will be experiencing major growth in construction within the next few years.

The STEM science building will be constructed, as well as a new residential hall on central campus, which will include another dining hall.

First-years Madison Duffy and Saylor Scheller are excited about the possibility of a new dining vendor on campus.

“I would much rather prefer sustainable and healthy choices,” Duffy said.

“I feel like the food just isn’t right, and it makes me feel sick,” Scheller said.

“If I had the power to vote for a new dining provider, I would definitely choose Aramark,” Duffy said.

Whatever the future may hold for the on-campus dining provider, junior Kate Kude believes there will be change no matter what.

“They [Sodexo] should not be afraid to change things up a little bit,” Cude said.

“I believe the open bid process motivates Sodexo to do better and improve the quality and sourcing of their food.”