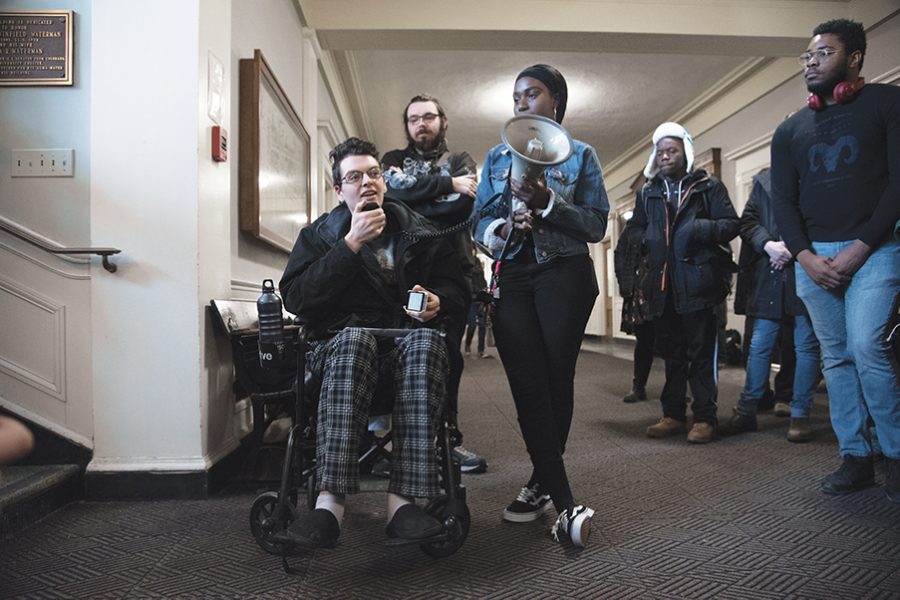 Seth Wade, a member of the Coalition for Student and Faculty Rights, speaks at the Feb. 26 NoNames For Justice rally in Waterman. The Coalition has voiced support for humanities departments after cuts to faculty.

A student activist group has released its list of demands aimed at the University administration.

The Coalition for Student and Faculty Rights was created by students in support of United Academics, the faculty union, sophomore Cobalt Tolbert said.

The organization is student-run and was created to challenge UVM’s cuts to faculty and programs in the College of Arts and Sciences, according to the coalition’s demand sheet.

The idea behind the coalition occurred during a meeting where students were encouraged to talk about what was going on, first-year Jordyn King said. The coalition is meant to get the attention of the administration. 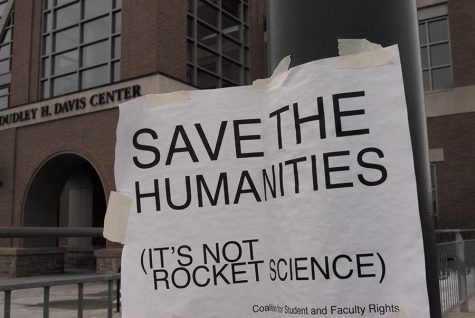 “It was a couple weeks ago. We met on a Sunday afternoon just to talk about different things that have been happening within the school, faculty cuts, the event center, the new president,” King said.

At the first planning meeting, the group came up with a list of demands, many of which were similar to UA’s demands, coalition member Alex Smith, a junior, said. The list of demands was sent to administration Feb. 25.

The Feb. 5 UA meeting was the first time UA President Sarah Alexander, associate English professor, spoke to anyone involved in the coalition, she said.

“It’s a really inclusive group of a bunch of students who are involved in other kinds of activism,” Alexander said. “Their demands overlap with the faculty concerns at this time.”

The students involved in the coalition care about the educational priorities at UVM, Alexander said.

“Because we have similar concerns and interests it can be meaningful if we try to support each other and work together,” she said. “I want to support student activists as much as I can.” 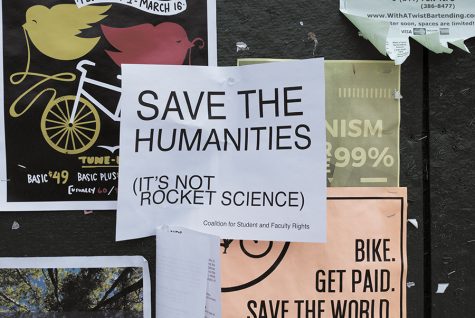 “Initially we had a list that was like 18 demands, which was good, but it wasn’t very organized, so [our demand sheet] is our more organized form that we voted on,” Smith said.

UA and the coalition organized a rally Feb. 14 outside of  Howe Library, according to a Feb. 14 Cynic article.

“[UA] had a rally and many of the students that identify as part of the coalition spoke at that rally,” Alexander said.

The group plans to continue posting their demands around campus and making sure they are visible, King said.

“Next steps are current flyering, supporting NoNames for Justice, reaching other organizations,” Smith said. “In the long term, hopefully the administration will at least reverse the non-renewal faculty cuts, class increases and cuts to part time.”

If the administration were to reverse these, there could be more of a discussion about what is happening with the University, Smith said.

“We care deeply about this University and the quality of education that we’re paying for,” King said.