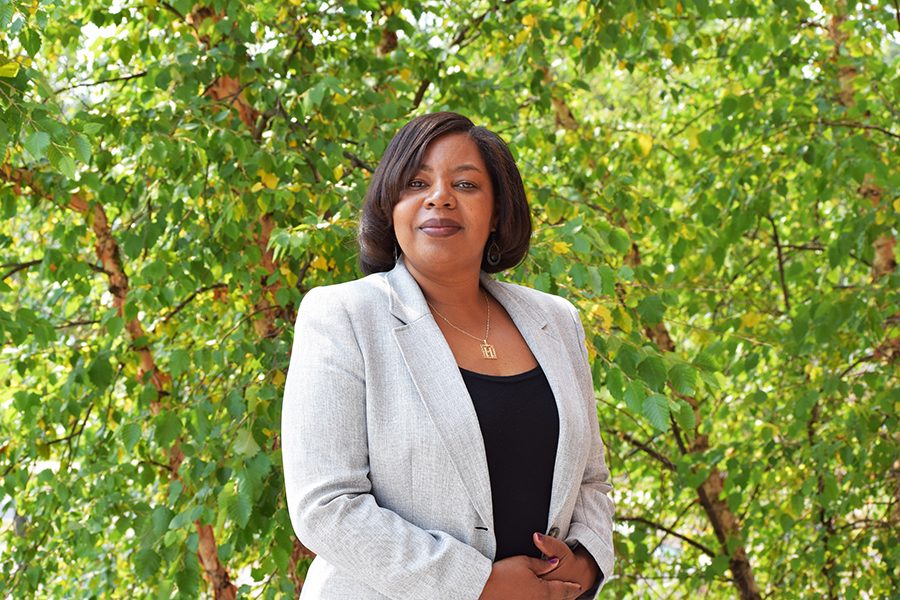 Three handmade posters lean against the wall of Wanda Heading-Grant’s office, covered in pictures of her with her UVM colleagues. Heading-Grant made the posters when she returned to UVM after beating breast cancer, she said.

Heading-Grant, vice president for human resources, diversity and multicultural affairs, was awarded the Inclusive Excellence Award in the Individual Leadership category from the National Association of Diversity Officers in Higher Education.

Her journey to UVM started in Trenton, New Jersey, where she grew up. Heading-Grant wanted to be different than her peers, she said. She then began working toward her undergraduate degree in social work at UVM in 1987.

Heading-Grant met her future husband during her first year at UVM. He was a large factor in her decision to stay in Vermont, she said.

After graduating from  an accelerated master’s program at Adelphi University in 1988, Heading-Grant returned to UVM, she said.

Sherwood Smith, senior executive director in the department of diversity, engangement, and professional development, has worked with Heading-Grant for 12 to 14 years, he said. He felt welcomed by her.

Smith was happy for Heading-Grant when she received the award because she has been committed to UVM for so long, he said.

Heading-Grant is responsible for Blackboard Jungle Symposium, an event that sheds light on the discussion of diversity and inclusion within the classroom, she said.

She is also credited with the relocation of the Mosaic Center to a more centralized spot in the  Living/Learning Center, Heading-Grant said.

Heading-Grant said that these accomplishments, among others, helped her win the award.

“I was doing the cabbage patch [dance],” Heading-Grant said of her reaction when she heard that she won the award.

Heading-Grant owes much of her success to students, colleagues and her church, she said.

“She is a woman of color, and seeing her at such a high position and getting recognition is heartwarming,” said sophomore Reginah Mako, chair of the SGA Committee on Diversity, Inclusion and Equity.

The award reaffirms what she is doing, Mako said.

Heading-Grant said that doing HR and diversity work is hard because they are two complex areas filled with vulnerability and emotion. Regardless, she enjoys doing this work and helping her community, she said.

The visibility from the award provides a voice and an opportunity for her to help on a local, regional or national level, Heading-Grant said.

Heading-Grant said she hopes to take her big ideas and use this opportunity from the award. She would like to take advantage by putting some of her ideas out there to change systems, she said.