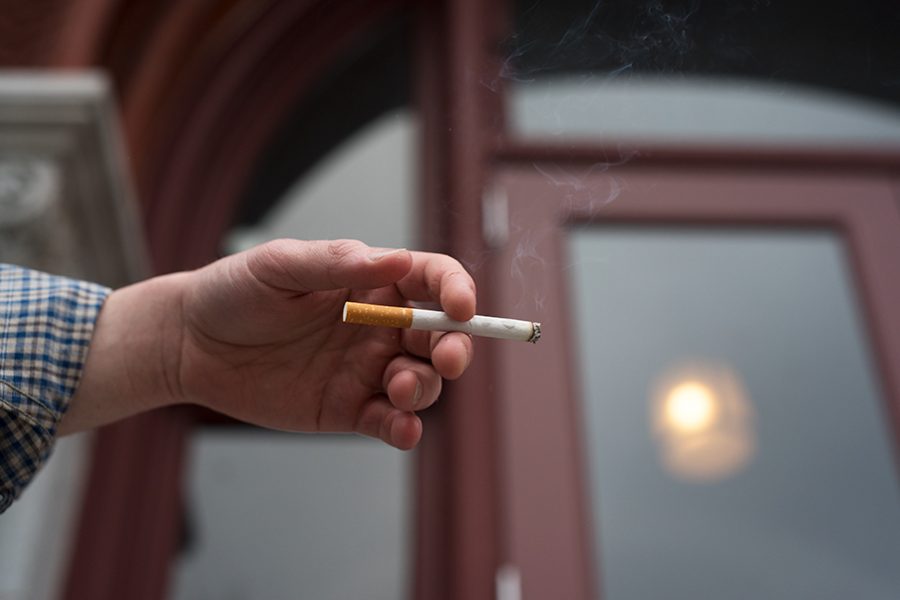 A popular place to smoke on campus is outside Williams Hall. The Center for Health and Wellbeing is attempting to limit on-campus smoking by hiring student cigarette ambassadors to engage with students smoking on campus and post informational signs.

Smokers on campus can now expect to interact with the new cigarette ambassador program while taking a drag.

The Center for Health and Wellbeing is attempting to limit student cigarette use by engaging with smokers on campus and posting informational signs, said Parker Holloway, program coordinator for Living Well.

Living Well, located on the first floor of the Davis Center, is an organization meant to support students in maintaining a well-balanced lifestyle, according to its website.

“The idea was to roll [signs] out at the same time as having the tobacco-free ambassadors kind of start their work so that there’s multiple angles of it,” Holloway said.

The ambassadors help locate where the most cigarette waste is, as well as where people are and are not smoking, Holloway said.

First-year Undraa Irvin said she became a cigarette ambassador to help the University cut down on waste.

“I just really care about keeping our campus with the vision of how UVM wants to keep it,” Irvin said. “I know that all the littered butts will end up in our lake and harm our ecosystem and the fish that live there and eventually get back to us.”

Junior Anya Steinhart, who smokes cigarettes, acknowledges that cigarettes are harmful but said that it is her choice to smoke.

“I would rather not have a random stranger come up to me and be like, ‘you need to stop smoking now,’” Steinhart said. “My reaction would be to put it out and light another cigarette.”

SGA’s cigarette butt receptacle resolution has recently been in the works through a pilot program, SGA Vice President Gillian Natanagara, a junior, said.

With the help of Tom Gustafson, vice president of University relations and administration, 10 receptacles will be placed around the campus perimeter, like on the Main Street intersection, Natanagara said.

“We’re going to track how much litter is around those areas, how much litter from the hotspots Gillian and I have identified, has changed,” said sophomore Jacob Weinstein, senator on the Committee on the Environment.

The mentality behind the receptacles is not to encourage people to smoke, but to recognize that people smoke, Natanagara said.