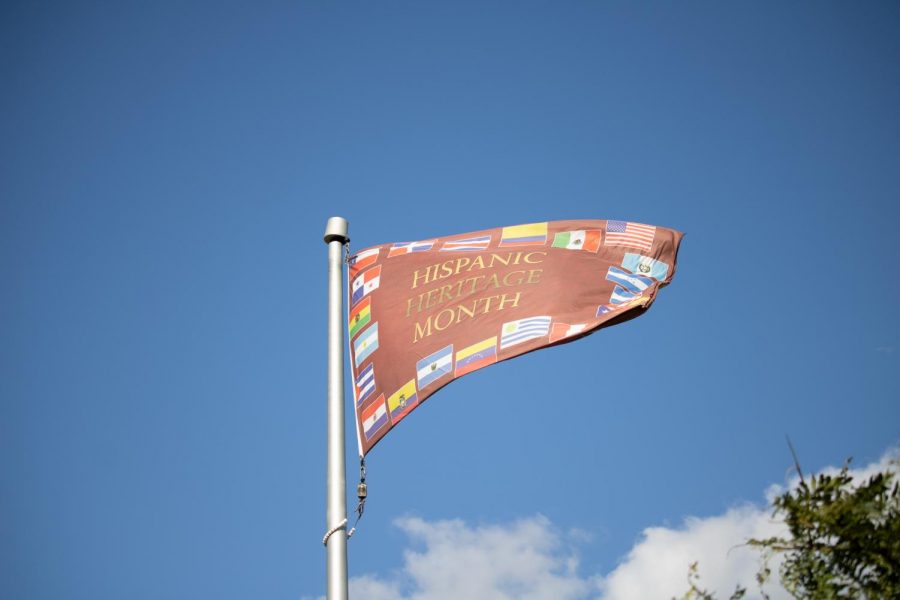 A Hispanic Heritage month flag blows in the wind on a flagpole in front of the Davis center, Sept. 18.

SGA called on UVM to allow identity groups on campus to fly their flag for longer than the current five day limitation, following mounting tension between student groups and the administration.

The resolution, which passed unanimously at the SGA meeting Sept. 22, centered around changing UVM’s flag policy and allowing Alianza Latinx to fly the Hispanic Heritage flag outside the Davis Center for longer, after the group raised it Sept. 17 for Hispanic Heritage month.

“This is not only Alianza’s issue,” said Zyakkiriah Rhoden, chair of SGA’s Finance Committee. “All those identity organizations that primarily use the special events flag are being oppressed on this campus.”

The resolution also asked for control over the Davis Center special events flagpole to be transferred back to Daphne Wells, director of student life, who controlled it before that power was shifted to Gary Derr, vice president for operations and public safety.

Wells said she doesn’t know why control over the  flagpole was taken away from her.

“I made the decision to fly the Black Lives Matter flag in June after the George Floyd unrest,” Wells said during the meeting. “And shortly after that I received emails saying that not only had the policy been changed and revised… that the flagpole would be moved under Gary Derr.”

Olivia Lopez, chair of the Committee on the Environment, who wrote the resolution with Rhoden called out the University for being hypocritical.

“A lot of identity groups on the campus are having trouble getting just basic visibility, while also a lot of administrators have been preaching for a diverse and equitable college and University,” Lopez said. “And yet this kind of shows they’re not doing that.”

The two committee chairs also pointed out that SGA and Alianza have reached out to Gary Derr repeatedly to discuss changing the flag policy and gotten no response.

“I’ve been emailing Gary Derr very frequently asking him to meet,” Lopez said. “And I kind of gave him an ultimatum today that if he didn’t respond by tonight we will start an email campaign.”

Rhoden stressed that this issue will not go away after Hispanic Heritage month.

“This will be a bigger issue if we don’t do something about it now,” Rhoden said. “Because the Black Student Union is going to want to fly its flag, in June it’s going to be the Queer Student Union, and this is just going to keep being an issue.”

The president of group, Skyler Nash, said the group does not agree with the University’s flag policy.

“If we can’t fly a flag at the Davis Center, as athletes, we will make sure anyone who wants to enjoy our sports can’t ignore our values. #BlackLivesMatter,” Nash wrote on Twitter Sept. 12 after the group raised the flag.