The Bernie Files: Bernie Sanders on the Drinking Age 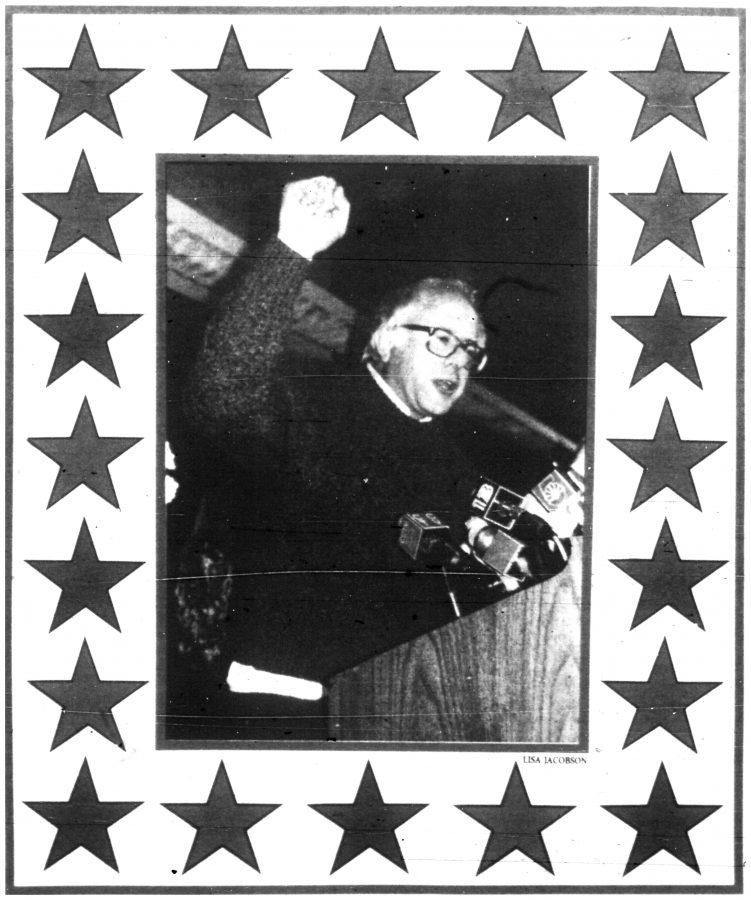 Bernie Sanders, after winning his first election for the U.S. House of Representatives. Photo by Lisa Jacobson, published in the Nov. 8, 1990 issue of the Cynic.

Vermont Sen. Bernie Sanders (I) has been running for president on a laundry list of beliefs he has publically held for dozens of years, but there is one issue he has not been vocal about for decades: lowering the drinking age.

Back in 1985, one Burlingtonian wrote to then-Mayor Sanders in support of raising the legal limit from 18 to 21.

He replied in a May 9 letter, writing that he personally opposed the move.

Sanders went on to explain his position, that age is less of an issue than education on substance abuse.

“If the schools instituted more substance abuse programs, then our young people would be able to make more educated decisions on alcohol consumption,” he said.

In the Oct. 16, 1986 issue of The Vermont Cynic, Sanders was asked about what changes he would bring to Vermont as governor, and he answered by outlining a number of issues on which he set himself apart from Democratic incumbent Madeline Kunin, one being the drinking age.

“[An] issue where Governor Kunin and I disagree on is raising the drinking age to 21. I disagree with that,” Sanders said.

He went on to outline how raising the legal age from 18 to 21 was “discriminating against a group of people,” stating that any person above 21 would still be able to drink and drive.

“I think that drunk driving is a very serious problem, but it is a problem for people of all ages,” he said. “If you’re 40 you can drink and drive, if you’re 80 you can drink and drive. I did not and do not agree that raising the drinking age to 21 is an acceptable way to deal; rather, in fact, I think it’s very discriminating against a group of people.”

During that campaign, Sanders said that young people in particular abusing drugs was the byproduct of a political and economic system which looked bleak to them, calling in a Sept. 30, 1986 press release for the creation of a State of Vermont Task Force on Drugs, which would “concentrate on root causes of drug and alcohol abuse among young people.”

“Drug and alcohol abuse is not solely a matter of people being captured by some magical powder that appears on their doorstep. There are reasons why people take drugs,” he said in the press release.

In 1999, a group of Vermont high school students petitioned Sanders, then Vermont’s representative in the House, to publically endorse lowering the drinking age, according to the Congressional record.

While some of Sanders’ beliefs are held by a majority of people in the U.S., according to recent polls, only one-quarter of Americans believe that the drinking age should be lowered to 18, according to a 2014 Gallup poll.

The Sanders campaign did not respond to multiple requests for comment.