The Black Lives Matter flag was removed by an unknown person Saturday night, according to an email from Beverly Colston, director of the ALANA Student Center.

The disappearance of the flag is being investigated by police as an act of vandalism, Colston said in the email.

“Please know that UVM leadership is committed to supporting the flight of the flag and has not backed down despite criticism and backlash,” Colston said in an email to the ALANA Student Center community.

SGA released a statement regarding the incident around noon. 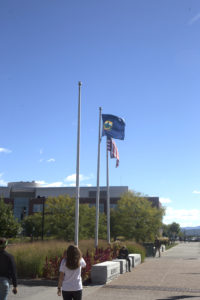 “This action underscores the necessity in this country to engage in a frank and open discussion about the injustices that so many Americans face simply because of the color of their skin,” the statement says.

SGA said universities are a place where ideas can be held and discussed, which is why they will they will stand by UVM’s cornerstone and remain leaders in standing up for equity, according to their statement.

“We as a nation will not be able to address these challenges unless we fully acknowledge that there is a problem….Too often we let ourselves become divided into categories – if you’re for something, you must be against something else. It doesn’t need to be that way,” they state.

The raising of the flag Sept. 22 was sponsored by SGA and stood beside the Vermont and United States flags on the Davis Center Green.

Junior Rachel Altman said she considers the theft of the flag to be a hate crime.

“Whoever [took the flag] took something beautiful and destroyed it,” she said.

Altman said she felt a sense of pride when the flag was put up.

“When I saw it up, I was so proud to be going to a school that understands the value, importance and necessity of reminding the students of color on our campus that their lives matter when everything else in the world is telling them that they don’t,” she said.