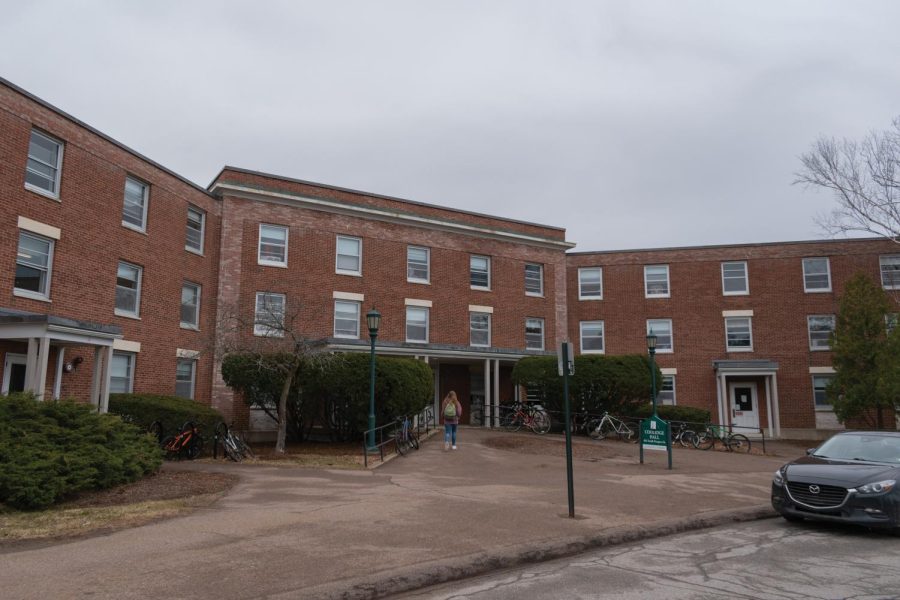 Students suspect the mold may be toxic due to a sickness going around Coolidge which students dubbed the “Coolidge Cough,” said sophomore Shae Crowley, a resident of Coolidge. The symptoms resemble black mold poisoning, she said.

Crowley’s symptoms in particular include a consistent cough that increasingly worsens, shortness of breath, popcorning of the lungs, weight loss and loss of appetite, she said. One student also had a rib crack from coughing due to an illness developed while living in Coolidge, Crowley said.

Some of these symptoms, such as a consistent cough and shortness of breath, are consistent with mold exposure, according to the Mayo Clinic site.

Other factors contribute to the health of students, primarily  poor hygiene, Hytten said.

The hygienic issues may be related to wet clothes lying on the floor and moldy food products in the trash, he said.

Six rooms in Coolidge reported detection of mold, Hytten said. However, ResLife only obtained evidence to substantiate mold found in one of the rooms and dealt with it quickly. A malfunctioning valve in the heating system caused excess moisture in the room and facilitated mold growth.

There are mold spores everywhere, Hytten said. Though Hytten said he has no knowledge of mold being in the other rooms where students reported it.

On March 14, the Monday after spring break, a student on the second floor of Coolidge notified junior Sierra Dube, the RA on the floor of the substantiated claim, that black mold was all over the wall in their room, Dube said.

The Physical Plant Department’s Training and Compliance Office sanitized and disinfected the wall on the same day of inspection, according to a March 28 email from Hytten.

The plant-based product used to clean the mold should not allow for regrowth, although there might be light stains, stated Henry Moreno, associate director of facilities operations, in a March 15 email to the two students living in the impacted room.

While Hytten said the University has addressed the problem, some stains appear as though they may still have mold remaining in the crevices, Dube said.

With the mold cleared up, the students were allowed to return to their room, the email stated. Per request, they relocated instead and new residents took their place in Coolidge.

“That room that those students vacated is already occupied again by another pair of students,” Hytten said.

When senior Keisha Bedor was an RA in Coolidge on the second floor during the 2020-21 school year, she was aware of the mold.

“Some of my residents at the end of the hall had issues with mold,” she said. “The RAs talk about it all the time, how much we want it to just be torn down.”

All the snow melting causes a lot of moisture in the air which increases the chance of mold growing, Bedor said.

As snow melts, this causes the air to be damper which allows mold to grow, according to a March 20, 2015 CBC news article.

“I was coming down with another illness right as this was happening,” said sophomore Peri Ferdinand, a resident in Coolidge. “I asked a maintenance man to come check my room and he walked in and just did a visual scan.”

The maintenance person looked behind both Ferdinand’s bed as well as her roommate’s and told them they were in the clear, she said.

Ferdinand asked the maintenance person if she should be worried about her respiratory illness and they said no, it was just a cough.