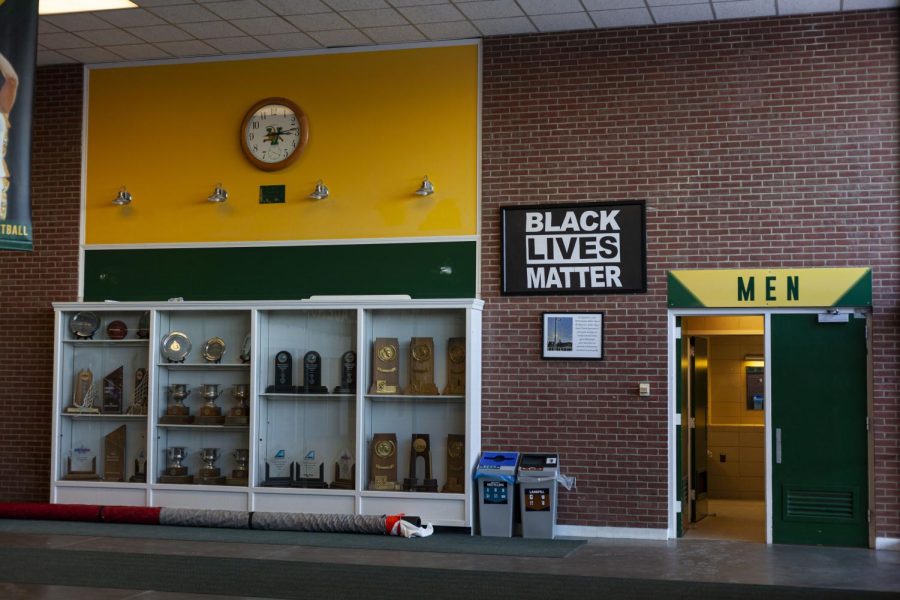 The UVM Student Athletes of Color Affinity Group hung a framed Black Lives Matter flag in the Patrick Gym, Nov. 17, 2021, but the installation is not permanent, said senior Carolyn Carrera, vice president of the SAOC.

Carrera and six other members of the SAOC hung the framed flag temporarily with the athletic department backing the initiative, she said. The SAOC is now in the process of searching for other ways to physically represent marginalized communities the same way the BLM flag does for the UVM community, said senior Alyssa Oviedo, a member of the SAOC.

As of right now, the group considers displaying something different every year if the BLM flag can’t stay up permanently, such as hanging the jerseys of student athletes of color in the lobby of the gym, Carrera said.

“We are trying to get these things done on campus, but we are simultaneously trying to also engage with the community,” Carrera said. “The SAOC would like to partner with any students or community groups which have the same aligning morals and goals as the SAOC.”

UVM’s flag policy prevented the BLM flag from flying permanently in the past, according to an Aug. 18, 2020 Cynic article. Students have made repeated attempts in recent years to hang the flag on campus, but it has only been hung temporarily.

During the height of the 2020 BLM movement, many students expressed disapproval of the administration’s decision to remove the BLM flag from Central campus. Multiple organizations petitioned for the flag to fly, but all were dismissed, according to the article.

In response to UVM’s removal of the flag in August 2020, the SAOC raised the flag without permission in September 2020, according to a Sept. 22, 2020 Cynic article.

At that time, the group released a list of six demands for the University, according to the article. These demands are still live on the SAOC website.

Several of their six demands have been achieved, Carrera said, such as the demand to implement an online implicit bias education and training module for students. The first module went out this past semester and is set to be an annual occurrence, she said.

Additionally, the SAOC is now involved in the hiring process for new department job openings and the annual faculty Diversity, Equity and Inclusion workshops and trainings, according to a Jan. 16 email from Carrera.

Cathy Rahill, associate athletic director for student-athlete development, has been very supportive of all BIPOC student athletes, Oviedo said. Rahill kept the BLM flag in her office following its removal from the flagpole in 2020 to memorialize the movement.

Although past attempts to display the BLM flag permanently on more high-traffic parts of campus have been unsuccessful, the flag is hung permanently in the Mosaic Center for Students of Color, according to an Aug. 28, 2020 Cynic article.

“The Mosaic Center is for students of color. Those are not the people that need to be reminded that Black lives matter,” Carrera said. “It is not a place that everyone on campus strolls through randomly throughout the day such as the Davis Center.”

While some students feel this permanent installation is not enough, the SAOC continues to push for better representation for students of color at UVM.