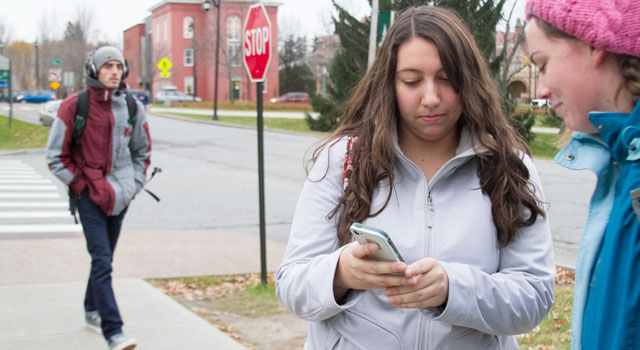 “It’s more convenient than waiting for the bus,” first-year Max Buhac said. “For example, in class it notifies you when it [the bus] will come to the destination.”

In the fall of 2013, senior Andrew Bowen, SGA vice president, began looking to bring a new bus-tracking app to UVM.

“I think it [the app] is something that will be useful. I think you’ll center where you are going based on the buses,” sophomore Daniel Cardenas said. “If you have that app you are more apt to use the buses. I would definitely utilize it.”

The app formerly used was Blirp It! However, it was student-run and when those students graduated the app wasn’t updated, Bowen said.

Blirp It! was a text-based system where students would text “blirpit” to a code number to get a response with an estimated arrival time for their stop, the SGA website stated.

The bus driver was supposed to press a button at each stop but if they forgot to hit it the system would be a stop behind, Bowen said. “They had to do constant updates to keep it running,” he said. “That really frustrated me so I started doing research on companies that had provided this software.”

Bowen considered two companies for the new app. One was TransLōc, which he ultimately chose, and the other was DoubleMAP, Bowen said.

“TransLōc real time provides the information your passengers need and expect on the personal devices they take everywhere,” the TransLōc website stated.

“A big benefit to this was that there was company tech support so transportation services would not have to deal with getting a hold of busy students [to fix problems with the app],” Bowen said.

Both companies bid to have a contract with UVM, but TransLōc offered the best deal, he said.

Some students downloaded the app early, however it wasn’t fully completed at that time, Bowen said.

This left some students who  downloaded the app early with the assumption that the app didn’t work, he said.

“I don’t think it really works based on what I’ve heard,” sophomore Charlie Zipprich said. “It’s awesome if it works, but I don’t really think it does,” first-year Jake Barter said.

The early version of the app had not yet added GPS to all of the buses, Bowen said. UVM was added to the app before all buses were running and it kept getting delayed because installing it in a lot of the buses took some time for transportation and parking services to do, he said.

There have been some problems with lag time, sometimes it takes two seconds for the bus’ location to reach the app, Bowen said. “All kinks have [now] been fixed,” he said. It took about eight weeks to get the system installed and running, Bowen said.