Campaign to end antibiotics on farms 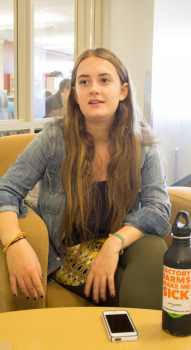 Overuse of antibiotics on industrial factory farms will be resisted in Burlington, due to the efforts of Food and Water Watch campaign.

A large number of students have raised awareness, sophomore Cara Stapleford said. They’ve gotten involved in events in the hope of passing resolutions with the city council, Stapleford said.

Eighty percent of the antibiotics sold in the U.S. are used in livestock production, according to the Centers for Disease Control (CDC) and Prevention website.

This creates a large amount of antibiotic-resistant bacteria, which is a public health crisis, according to the site.

“This practice is directly leading to the creation of antibiotic-resistant bacteria that could become a serious human health  threat,” a petition to U.S. Congress stated.

“When people are exposed to such bacteria, they are much more prone to get antibiotic resistant illnesses,” Stapleford said.

“People can not use antibiotics in order to get better and we don’t have medicine to fix the problem anymore,” she said.

More than two million Americans suffer from an antibiotic-resistant infection every year, the CDC reports.

There are 23,000 deaths from antibiotics, according to the report.

Stapleford worked as an intern for Food and Water Watch this fall to help the campaign organize events and outreach to the community.

“The mission of our organization is to provide safe food and water for everyone. The purpose of our campaign is to get the Burlington community more aware of this overused antibiotic problem and get the resolution passed,” she said.

The decision whether to pass the antibiotics resolution is on the agenda for the city council meeting Dec. 1.

“The vast majority of antibiotics in the U.S. are used for agriculture, and most of these drugs are routinely fed to animals to make them grow faster and compensate for filthy, crowded living conditions on factory farms,” the website stated.

“So far we have put on some events in Burlington. Last week we had a movie screening,” Stapleford said.

“People could attend to explore the problem with this issue. We reached Burlington city councilors trying to get them to support the resolution,” she said.

UVM also actively participated in the campaign to resist antibiotics on farms, she said.

With the working experience in Food and Water Watch, Stapleford took the responsibility of taking action on campus. She held informational meetings and wrote letters to the editor of the Burlington Free Press for publicity.

“I have done a lot of invitations on campus, so I know that lots of people have been interested and excited about this project. There are a great number of students that have signed petitions and support the events,” Stapleford said.