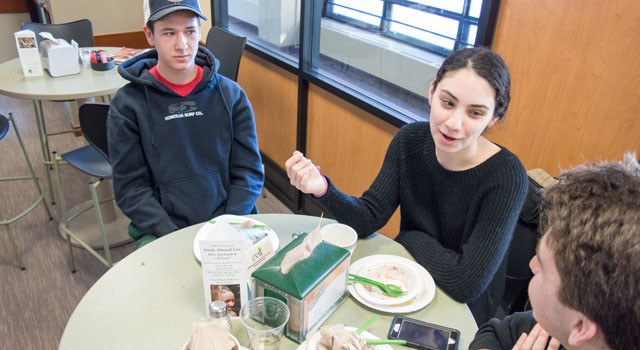 In November, Simpson Dining Hall’s dishwasher broke down due to a faulty heating component. It still hasn’t been fixed.

Melissa Zelazny, general manager for Sodexo Dining Services at UVM, oversees the functioning of the dining halls across the University and manages all food service related operations.

“The only problematic dishwasher that we’ve had has been on Redstone,” Zelazny said. “We had some issues last spring, which we had corrected and we operated all summer over there.”

“Last year I lived on Redstone and there were plastic utensils and paper plates used on two different occasions,” said junior David Polson.

“I feel like they’ve done a good job of limiting how it affects us as students,” said sophomore Ned Smith.

All food service establishments in Vermont must have dishwashers that wash dishes at 10 degrees higher than the national average. This means that dishes must be washed at a temperature of 171 degrees, according the state of Vermont’s health department. The booster, which regulates the water temperature within Simpson’s dishwasher, broke down and failed to meet this requirement, Zelazny said.

“We’ve been working on a bunch of different fixes for that and they’ve worked for a period of time but then something else will happen or based on volume the temperature will drop and unfortunately we’ll have to switch to paper and its not optimal but we want to make sure everybody is safe so we’ve been making compromises there,” Zelazny said.

“The booster that is currently in there wasn’t one hundred percent stainless steel and that was posing problems with buildup of ionization of the water coming in and creating some blockages, so we had to go back in and put in a stainless steel booster,” Zelazny said.

In order to keep the dining hall functioning, paper plates and biodegradable utensils have been brought into the facility.

“We estimate that we are going through about 7,000 pieces of disposable dining wear a day,” Zelazny said.

Simpson has tried to remain as environmentally friendly as possible while using disposable silverware. However, the biodegradable utensils that were initially being used were not compostable.

“We don’t have it too bad. It [the use of disposable dining ware] is wasteful for sure,” said Smith.

“There have been a lot of discussions about utensil-ware and compostable products in general for Green Mountain Compost. So at one point we were using compostable utensils, but then there are certain ones that have a certain residue in them that when it is in the compost, would not allow the compost to have organic certification because of this chemical,” Zelazny said.

The dishwasher most likely will not be fixed until the dining hall is shut down for a long enough time, which won’t be until spring break, Zelazny said.