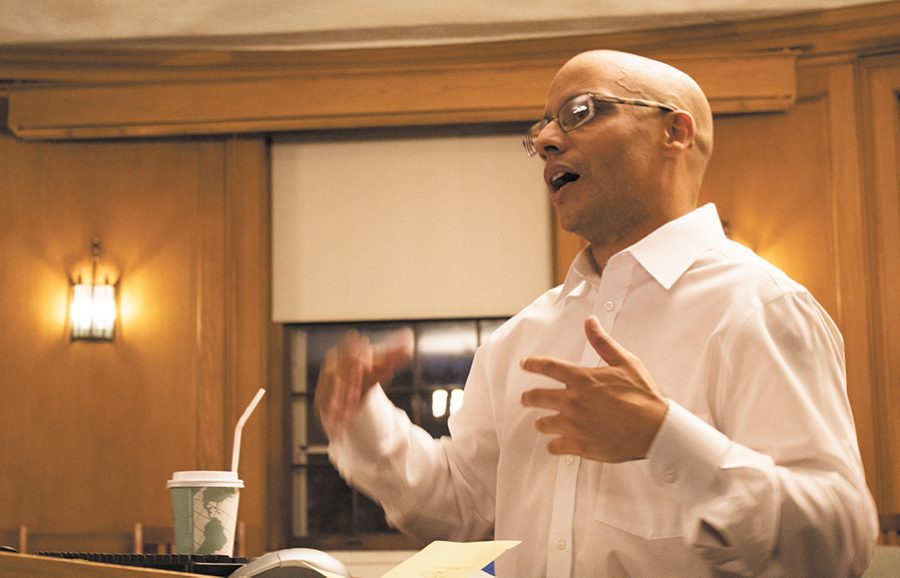 History professor Amani Whitfield speaks about slavery in Canada as part of the College of Arts and Science's Full Professor Lecture Series Nov. 28 in the Waterman Memorial Lounge.

The Waterman Memorial Lounge was crowded Nov. 28 with students and faculty waiting to hear history professor Amani Whitfield speak about slavery in Canada.

Whitfield’s lecture was part of the College of Arts and Science’s Full Professor Lecture Series, started in 2007 by then-CAS Dean Eleanor Miller to honor professors who were recently promoted from associate professor to full professor, CAS Dean Bill Falls said.

Full professor is the highest academic rank at a university, save for special distinctions.

“When you become a full professor it’s because you’re a nationally recognized scholar,” Falls said. “What better way to celebrate that achievement than by sharing their work with the community?”

Whitfield’s research is focused on the experiences of black slaves in the Canadian Maritimes, he said.

The Maritimes include the provinces of Nova Scotia, New Brunswick, Newfoundland and Prince Edward Island.

His most recent project is a “biographical dictionary” of slaves in the Maritimes. The dictionary is meant to be a list of the names and short biographies of over 1,000 Canadian slaves he has come across in his research, Whitfield said.

“It’s telling a short biographical story of each person, whatever I have about them,” Whitfield said. “Sometimes it’s a lot, but other times it’s really depressingly sad.”

Whitfield highlighted one entry, which was labeled “unnamed child,” that only had a short description about their mother and date of when they were sold.

Whitfield’s intention is to humanize the individual experiences of  slaves, which tends to be looked at more on a broader, societal level, he said.

“I’m trying to put the stories of these individual slaves back in the study of slavery,” Whitfield said.

Whitfield began looking at slavery and the black experience in the provinces of the Canadian Maritimes while attending graduate school at Dalhousie University in Halifax, Nova Scotia.

“I became more and more interested in the place I was living and found that there were thousands of black migrants who had gone to Nova Scotia, who would have thought, between 1783 and 1820,” he said.

Before Whitfield began his talk, he was introduced by history Professor Sean Field.

Field described how he first met Whitfield when the history department was looking to fill full-time faculty positions in 2004, he said.

Field said that hiring Whitfield is one of the best decisions the University has made.

“You will look like nothing but a pale reflection of [Whitfield] after he has been in your classroom,” he said.

Juniors Kaleigh Calvao, Jason Goldfarb and Nathan Raike went to Whitfield’s lecture because they are doing an independent study with him.

Goldfarb and Raike both said they enjoyed having the opportunity to  see the kind of work that their professor is doing outside of class.

“It’s cool to see what goes on behind the scenes,” Raike said. “It’s like a ‘Wizard of Oz’ moment.”