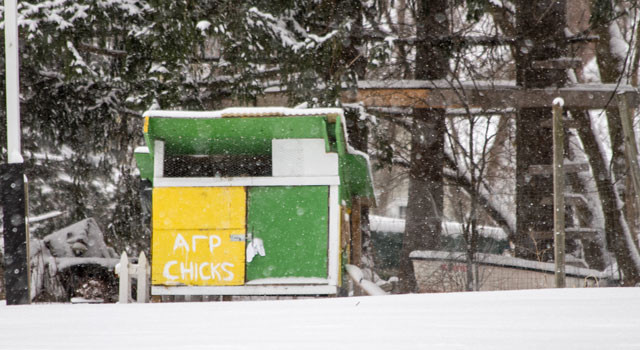 Three UVM students faced charges last month for allegedly stealing a live chicken, named Sweet Dee, from the Alpha Gamma Rho fraternity house, killing it and eating it in a UVM residence hall, according to a police affidavit.

First-years Hannah Jackman, Cameron Dube and continuing education student Darian Newman are the suspects in the killing, according to the affidavit.

PETA has since contacted UVM, requesting that the three students be expelled for their alleged actions.

“Cruelty to animals should be taken seriously, and I hope the University will send the message that bullying and abusing anyone is unacceptable,” said Marta Holmberg, peta2’s director of youth outreach and campaigns.

“I urge you to expel the students who stole, killed and ate the chicken,” Holmberg said.

“Both [Newman and Jackman] said the idea to steal and kill the chicken was discussed beforehand, and then the three decided to carry out the plan,” the affidavit stated.

During a police interview with Newman, he said photographs were taken of the group holding Sweet Dee, and a video was taken of Dube gutting Sweet Dee on the stovetop, according to the affidavit.

“Officer Bova and I watched the video and heard multiple references to ‘tripping’. A male voice on the video says ‘the first time you trip and Cam murders a chicken.’

The group on the video is laughing and appears to have no remorse for killing Sweet Dee. Dube is the main focus on the video as he guts Sweet Dee with a butter knife,” the affidavit stated.

Two brothers of the AGR fraternity had purchased Sweet Dee two years ago and had raised her from a chick, according to the affidavit.

The charges have since been dropped and the three students have returned to UVM.

“They knew we were good kids who made a mistake, so AGR called the judge asking to drop the charges because we wrote an apology letter,” Jackman said in an interview with the Cynic.

“I’m really grateful for my relationship with AGR at this point,” she said. “I’m on really good terms with them now. In the future, I will definitely be doing service for AGR, whether it be helping them with their philanthropy or by showing them my gratitude.”

Jackman said she reflected deeply throughout winter break and realizes that her actions are not reflective of who she hopes to be when she graduates from the University.

She hopes that incoming first-year students have a lesson to learn from the news of this incident.

“I just want incoming freshmen to realize that the things you do first semester, when you find so many new friends and things are so new and fresh; it’s all fun, but at the end of the day you have to realize why you’re really here at the University,” she said.

“As an animal lover, I love animals to death,” Jackman said. “When I saw that I was kind of astounded. It’s something PETA would do, but honestly, obviously I felt remorse for the life that I took, but I’m always going to be an animal lover. They just saw one side of me, they honestly don’t know who I am, and they don’t have the right to judge.”

As for her relationship with Dube and Newman, Jackman said she has disassociated herself from them since the incident.

“Being the person you want to be 10 years from now is what really matters, and not just having fun with the wrong crowd,” she said. I’m disassociating myself from them [Dube and Newman] and I’m surrounding myself with positive people who make me who I want to be.”

Sweet Dee was one of six pet chickens in AGR’s chicken coop, according to the affidavit.

Joseph D’Ambra, a senior at UVM, said that during his freshman year at the Trinity dorms, a fellow student stole a chicken from a house near the dorms, slaughtered it on the spot and proceeded to cook it for dinner in the dorm complex kitchen.

“Chickens are delicious and meant to be eaten, so that’s no big deal,” he said. Although, D’Ambra said he does not condone larceny.

“I’m not sure of the motive or idea behind those kids, but I definitely think they should be held responsible for it. Also it definitely grosses me out that they brought it back to a residence hall, definitely not sanitary,” Ostrander said.

“I feel like it was some sort of satanic ritual, based on what I heard about how it was killed,” said Lily Spechler, a sophomore at UVM.

“There is certainly an ambiguous nature around the story, because culturally there’s a different take on it,” he said. “A chicken is an animal that’s certainly different–it’s used in our culture in a lot of different ways.”