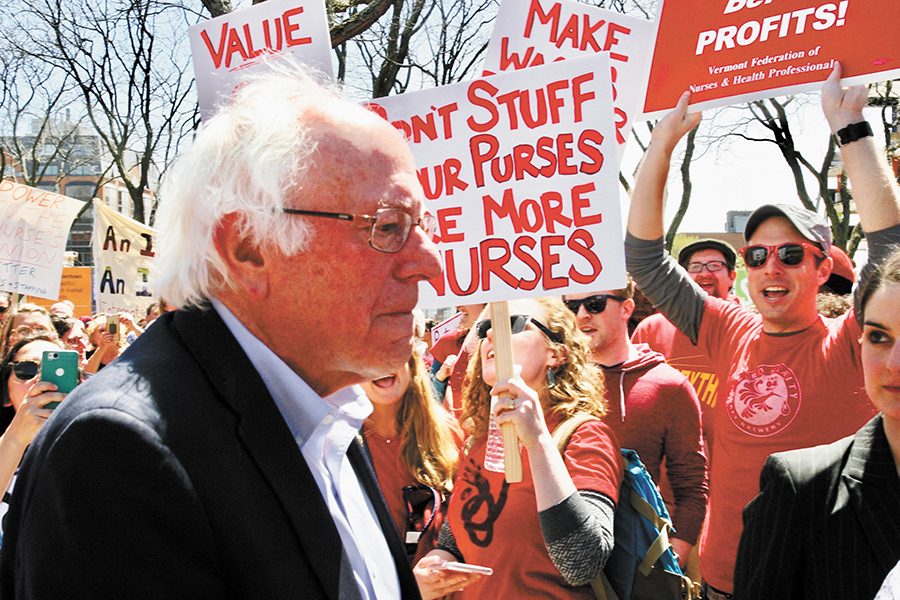 Sen. Bernie Sanders and Rep. Peter Welch spoke to UVM students at the Rally for Climate Action Sept. 24 in the Davis Center.
Lt. Gov. David Zuckerman ’95, UVM faculty, SGA members, alumni and current students also addressed the crowd in the Grand Maple Ballroom. They spoke about how students in Vermont can get involved in climate activism.
Sanders stressed the importance of young people taking political action, saying that the first step students should take to combat climate change is to vote for candidates who support renewable energy use.
“You can’t sit around and think somebody else is going to do it,” Sanders said. “[Today’s young people will] have to stand up and fight back in every way that [they] can.”
Junior Alexis Martinez, an environmental studies major, said she was assigned to go to the event by a professor.
Martinez said she is glad she went, although she was upset about missing Sanders’ speech.
“I’d say I learned a new perspective on things, but it didn’t necessarily tell me anything more about environmental studies that I didn’t already know,” she said.
The event opened with a speech from SGA speaker junior Jillian Scannell and Nancy Mathews, dean of UVM’s Rubenstein School of Environment and Natural Resources.
Senior Will Corcoran, chair of the SGA Committee on the Environment, spoke next, followed by speeches from Zuckerman, Welch and Sanders.
Marlow Baines, youth regional crew director of Earth Guardians, an international climate advocacy group, spoke next about energizing younger generations to advocate for the environment.
The event ended with a panel by environmental science graduate Kunal Palawat ’18, SGA Vice President junior Gillian Natanagara, Julie Macuha ’17, who works for the climate justice group 350Vermont and graduate student Eric Recchia, a Gund Institute employee.
Although the administration has a lot of power in making environmentally related decisions for the University, students have a role to play as well, Natanagara said.
“We ultimately provide the meat of this institution,” she said, refering to the student body’s ability to influence policy.
Macuga said that the most important things students can learn from the University is to question everything.
“That means questioning systems that exist,” she said. “Ask questions right here at the University.”
Students have a unique opportunity to shape the University’s decisions, Recchia said.
It is important to work with different groups when addressing environmental issues, Palawat said.
“We are so much more powerful working together,” he said.