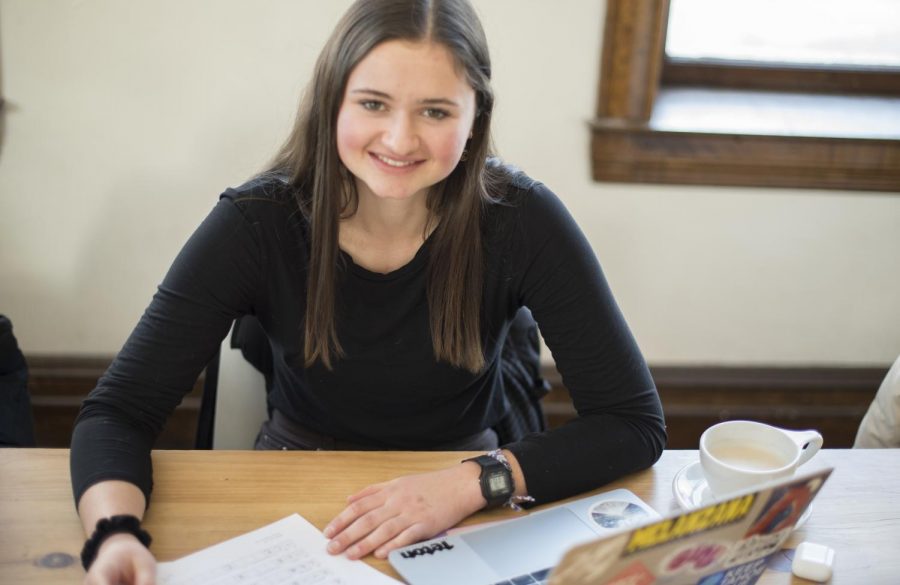 Sophomore Shannon Murphy works on her Chinese homework in a coffee shop, Feb. 9. Murphy was one of two students intending to study abroad in China spring 2020.

Despite a flight booked and bags packed, sophomore Shannon Murphy’s study abroad trip to China was canceled due to deepening concerns about the new, 2019 coronavirus.

Murphy was one of two UVM students slated to go to China. Hesitation over the decision to cancel the trips was met with anger as students scrambled to find open classes and housing for the semester.

“I still feel super scattered,” Murphy said. “I haven’t settled anywhere. None of my stuff is unpacked. Teachers have been very understanding, but three weeks is one-fifth of the semester that I missed.”

Murphy began planning to go abroad her first year at UVM and started learning Chinese in high school. She found out her program was canceled over email.

“I wasn’t surprised, but I was pretty bummed,” she said. “It was mostly the stress of having to figure out what I was going to do instead really quickly.”

Her spring 2020 program, “China: Health, Environment and Traditional Chinese Medicine,” was hosted by the School of International Training, a private institution based in Brattleboro, Vermont.

UVM does not directly run any programs in China during the spring semester or summer break but approves outside programs, according to a Feb. 3 email from Kim Howard, director of the Office of International Education.

The decision to cancel the trip was made after a U.S. State Department Level 3 Travel Advisory was issued, according to a statement from the school.

A Level 3 advisory states: “Reconsider Travel: Avoid travel due to serious risks to safety and security,” according to the U.S. Department of State website.

The State Department has since raised the advisory to Level 4: “Do Not Travel.”

“I think it’s very fair that they canceled it, but it’s very difficult,” Murphy said. “I just felt like I didn’t have a lot of options, which is nobody’s fault.”

Chris Murphy, Shannon’s brother, was living in Shanghai for work before fleeing the virus Jan. 27.

“I was on one of the last flights to America at all,” he said. “There are increasing flight restrictions, and I would’ve been stuck in China for months if I hadn’t left.”

Uncertainty remains as to the exact number of people who are affected by the virus.

“I don’t believe in the numbers the Chinese government has given,” Chris Murphy said. “It’s in their best interest to underreport them but I also believe the U.S. media has overestimated the severity.”

At the time of publication, there have been 37,198 confirmed cases of the new 2019 strain of coronavirus with 724 deaths worldwide, according to a Feb. 8 statement by China’s National Health Commission.

Eighty-nine deaths and 2,656 new cases were recorded in the preceding 24 hours.

The 2019 coronavirus began in Wuhan, China, and has since spread worldwide. It is a respiratory virus and symptoms include fever, cough and shortness of breath, according to the CDC.

The first coronavirus case in the U.S. has been confirmed in Boston with two suspected cases in New York City, according to a Feb. 2 CBSNews article.