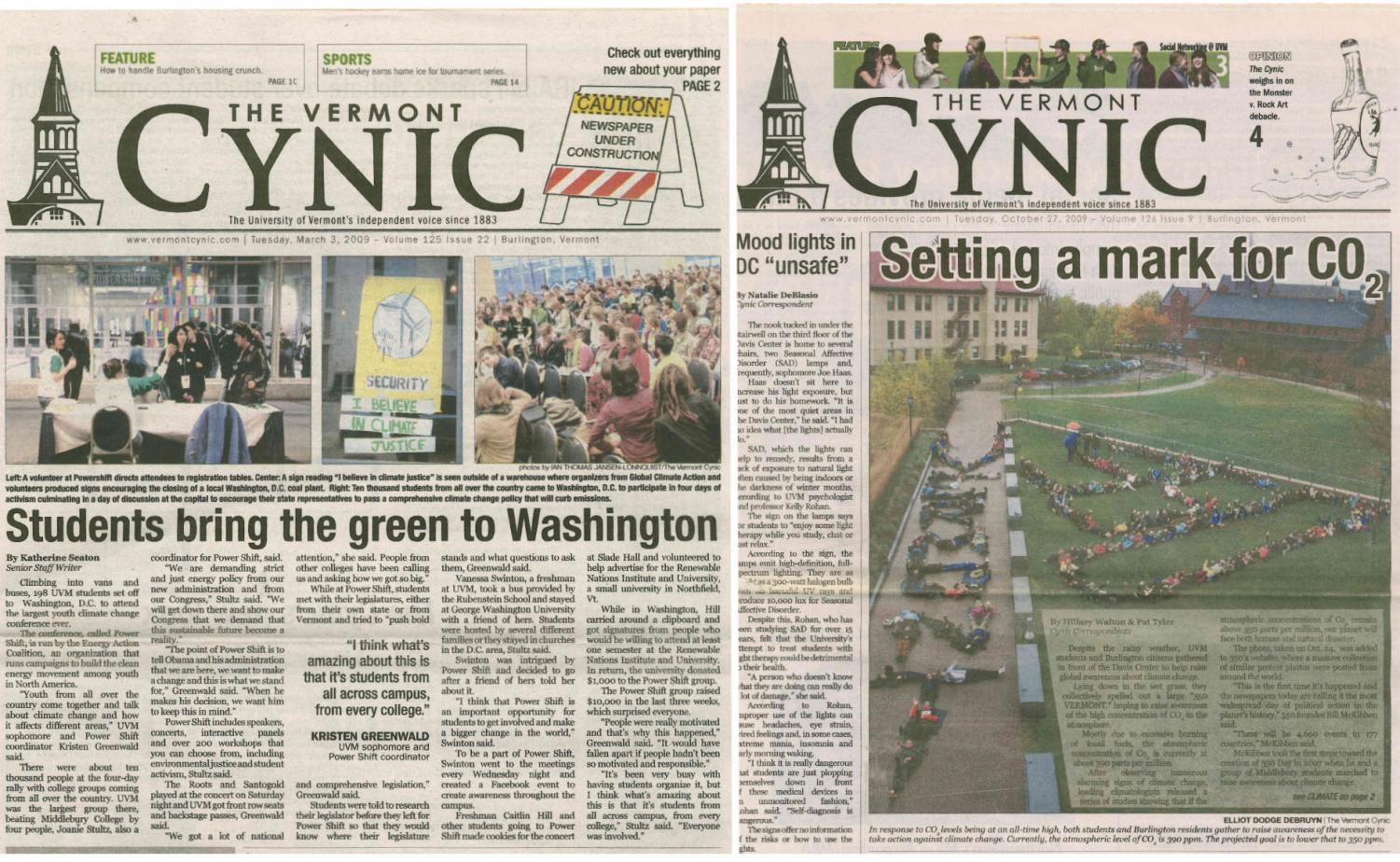 Ahead of today’s global climate strike, the Cynic searched its archives to find environmental protest coverage from the past decade.

Students at UVM have been involved in dozens of climate protests over the years. Climate justice and environmental action are issues that for many are intertwined with being a student at this university.

In order to better understand the current climate discussion on campus, we took a deep dive into UVM history and past Cynic reporting.

A decade ago, Burlington’s Battery park hosted a global warming rally. Students involved in the UVM Campus Energy Group spoke at the event, according to a Sept. 4, 2008 Cynic article. 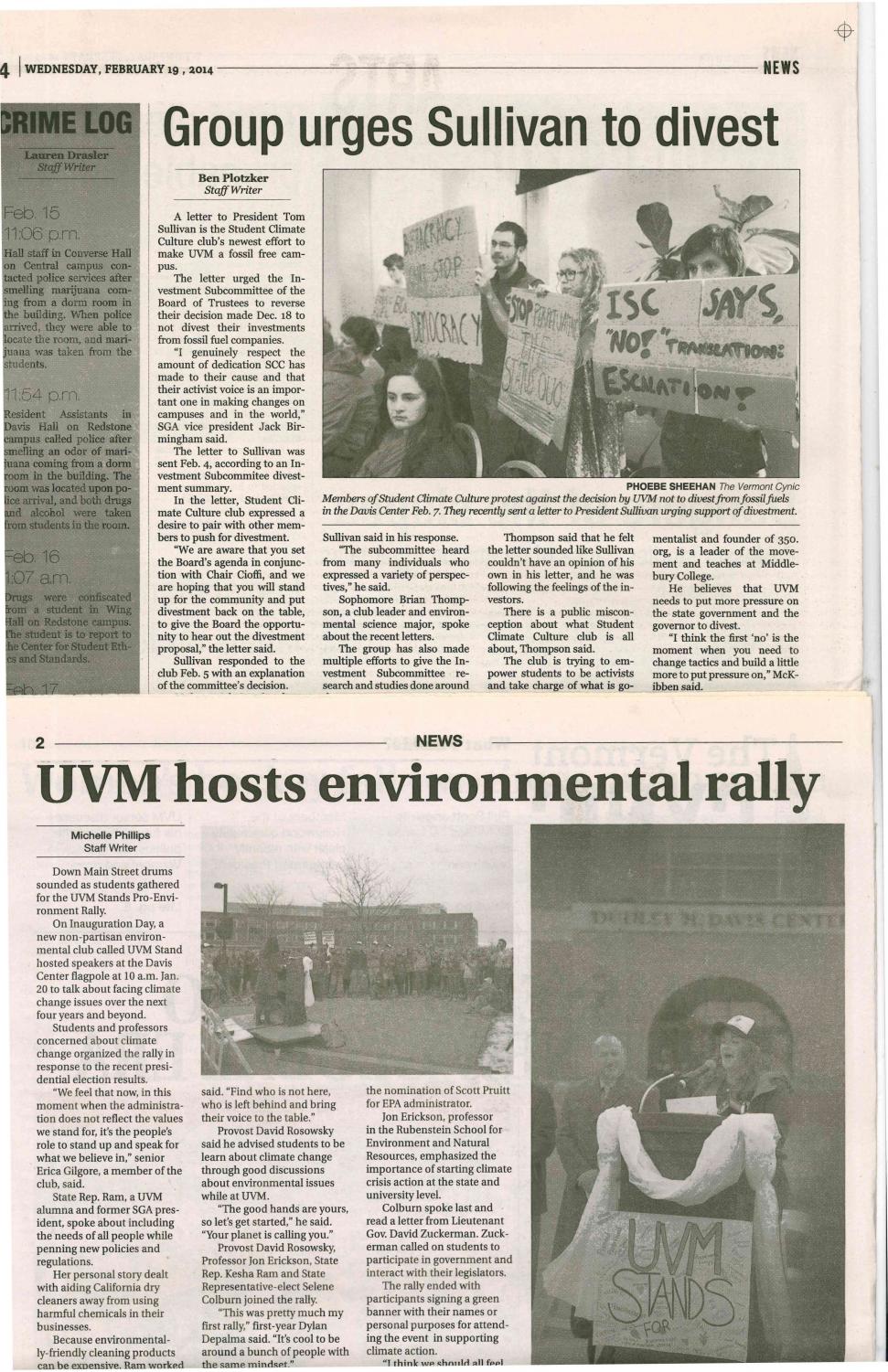 “The crowd of supporters stood on their heads in a circle…a symbolic gesture to denote their support and call for change,” Cynic correspondent Chris Palermino wrote in the article.

The Cynic’s front page was devoted to climate coverage twice in 2009.

Nearly 200 UVM students went to the youth climate conference in March 2009 in Washington D.C. UVM was the largest group represented at the conference, according to a March 3 Cynic article.

Later that year, UVM students and Burlington residents gathered in front of the Davis Center to raise global awareness about climate change in October 2009.

“Lying down in the wet grass, they collectively spelled out ‘350 VERMONT’ hoping to raise awareness of the high concentration of CO2 in the atmosphere,” Cynic correspondents Hillary Walton and Pat Tyler, wrote in an Oct. 27 Cynic article.

A month later, close to 40 students from various Vermont schools took a bus to Washington D.C. to  participate in the Keystone pipeline protest. Of the 18 UVM students who attended the protest, nine were arrested, according to a March 12, 2014 Cynic article.

“This was my first time getting arrested and I wanted it to be for something that wasn’t a doumb mistake but something that I care about and did intentionally,” Christina Fornaciari, a junior at the time, said. 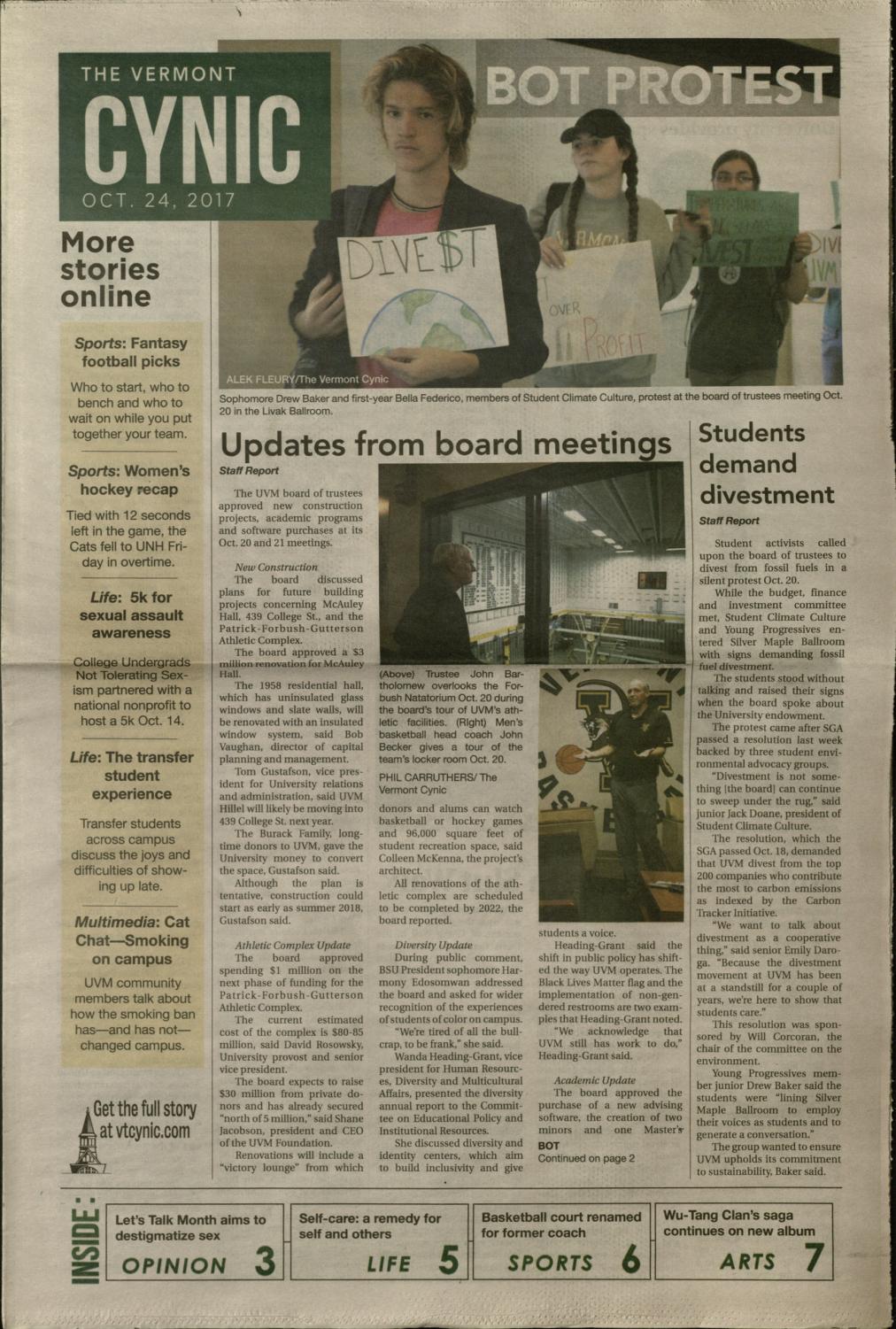 The most recent demonstration occurred in 2017, at the October board of trustees meeting, where students called upon the board to divest from fossil fuels through silent protest, according to an Oct. 24 Cynic article.

“We want to talk about divestment as a cooperative thing,” said senior Emily Daroga. “Because the divestment movement at UVM has been at a standstill for a couple of years, we’re here to show that students care.”

This is exactly what students in today’s protest are doing as well. Showing that they care.

We at the Cynic believe it is important to remember our actions and events within a historical context. We are not the first to demonstrate and we certainly won’t be the last.

The Cynic applauds all students today who are standing up for what they believe in.