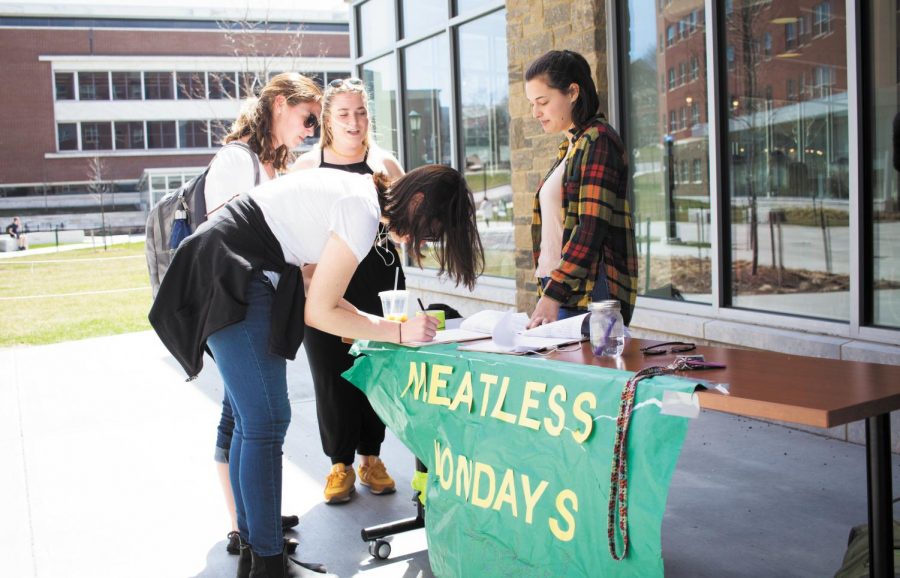 Sophomore Margaret Thomson tables outside of Central Campus Dining Hall for Meatless Mondays April 25, 2017. Green Mountain Veggies is starting Meatless Mondays at UVM dining halls on a small scale Nov. 12 and 26 as well as Dec. 3 and 10.

Redstone Dining Hall served dinner as usual Nov. 12, but with one significant change: there was no meat.

Green Mountain Veggies, a UVM club promoting eco-consciousness, is enacting its vision for Meatless Mondays on a small scale Nov. 12 and 26 as well as Dec. 3 and 10, said sophomore Lissy Kelly, dining adviser for GMV.

“Considering how energy-intensive and resource-intensive producing meat is, that reduction would have a huge impact over time on how many resources we use as a campus,” she said.

GMV’s goal is for no meat to be served at any of the dining halls for all meals every Monday, in order to reduce the University’s ecological footprint, since meat production uses more resources and energy than plant-based meals do, Kelly said.

As of now, the only meatless meal being served at any dining hall is dinner at the Redstone Dining Hall, which served oy hot dogs, meatless pizzas and veggie burgers instead of its usual meat options.

Meat accounts for 47.6 percent of CO2 emissions from food, according to the University of Michigan’s Center for Sustainable Systems. This is because meat is less efficient at transmitting energy, increasing the amount of CO2 per calorie, the website states.

GMV President Alex Bonfiglio, a junior, said that she began working toward Meatless Mondays her first year at UVM.

After having gotten roughly 1,500 signatures on GMV’s petition in support of implementing Meatless Mondays, this plan is in its trial phase, she said.

Sophomore Theresa Henckel, a vegetarian, said that although she has heard people complain that they don’t know what to eat if there’s no meat in the dining hall, she likes the idea and hopes it will open others up to the possibility of being vegan or vegetarian.

“There can be a lot of negative preconceived notions [about difficulties eating while being vegan or vegetarian], so I feel like it’s maybe helping people open up their minds,” she said.

It also makes it easy for her to find food to eat in a dining hall, she said.

“This is what the student body wants,” Watson said. “We’re responding to that in support.”