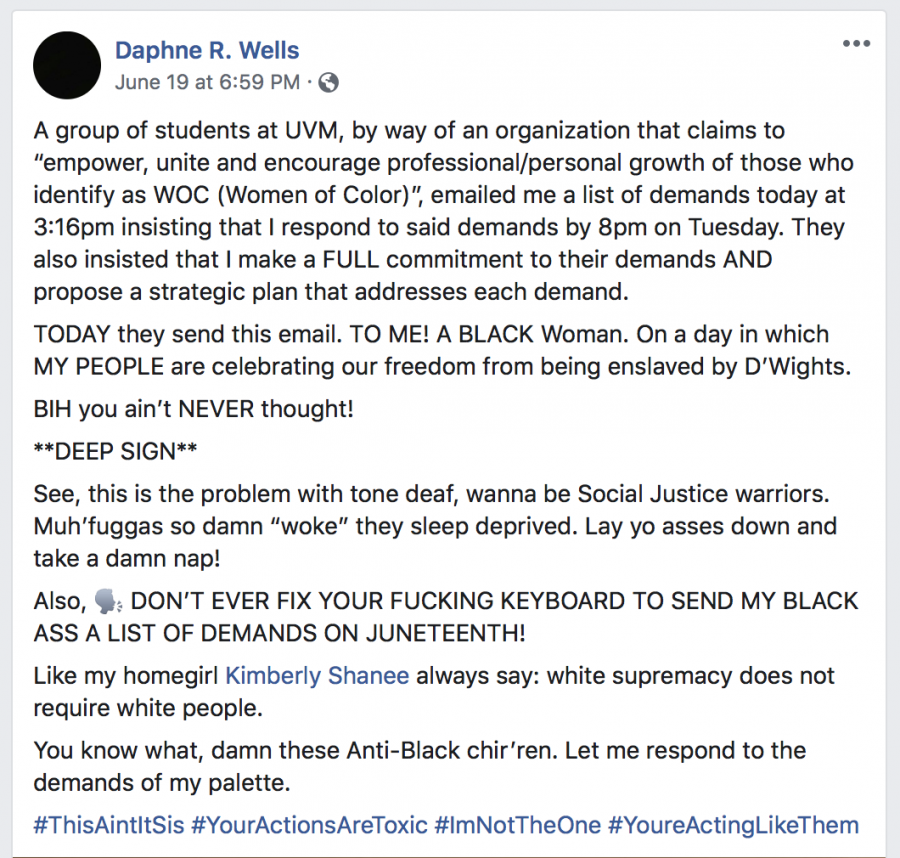 UVM’s Director of Student life cursed out a group of students on her Facebook account Friday after they emailed her and other UVM administrators a list of demands.

Four hours after receiving an email from a coalition of student activists Director of Student Life Daphne Wells stated in a Facebook post that the students were “tone deaf.”

The email, sent at 3:16 p.m. Friday, held a list of demands she was asked to meet by the following Tuesday at 8 p.m..

“See, this is the problem with tone deaf, wanna be Social Justice warriors,” Wells stated. “Muh’fuggas so damn ‘woke’ they sleep deprived. Lay yo asses down and take a damn nap.”

In a June 21 email to the Cynic, Wells stated she will no longer be giving interviews or comment to the Cynic and declined to comment on this specific post.

The students that wrote the initial letter to Wells said in a collective statement they never meant to single out any single person at UVM, it was a message sent to multiple administrators.

“We recognize the confusion, and feelings expressed by both members of the University and students involved in the drafting of the demands/letter, and it was never our intention to single out any specific individual, as we had sent the letter to multiple members of administration, the Board of Trustees, the Student Government Association, and the Student Union,” The June 21 letter to the Cynic states. “With that said, we want to recognize the enormous faculty support, on-campus student organizational support, and local and state government support that the letter and demands themselves have garnered.

The crux of the letter/demands are to help create a more restorative and preventive model of security on our campus, and we hope that this stays the focal point of the conversation moving forward. The individuals and organizations involved in the drafting of the demands/letter intend to engage with the administration and work together to create meaningful  dialogue and action plans for our campus and community.”

According to the Department of Student Life’s mission, the office has a strong commitment to social justice and removing barriers for students.

“As allies to UVM students and as leaders in our community we strive to identify and remove barriers to student growth, education, and involvement,” the mission states.

The mission also states the office works to engage in dialogue, provide training, and develop programs that support our commitment to creating an active, inclusive and just student body.

“The university takes the conduct of its employees seriously and pursues the appropriate steps, but does not comment on individual employees,” Corredera stated.

In the post, Wells stated she was upset that students had reached out on Juneteenth, a statewide holiday in Vermont.

“DON’T EVER FIX YOUR FUCKING KEYBOARD TO SEND MY BLACK ASS A LIST OF DEMANDS ON JUNETEENTH!” Wells stated in all capital letters.