Eight students returned to campus to find their rooms broken into, investigations underway 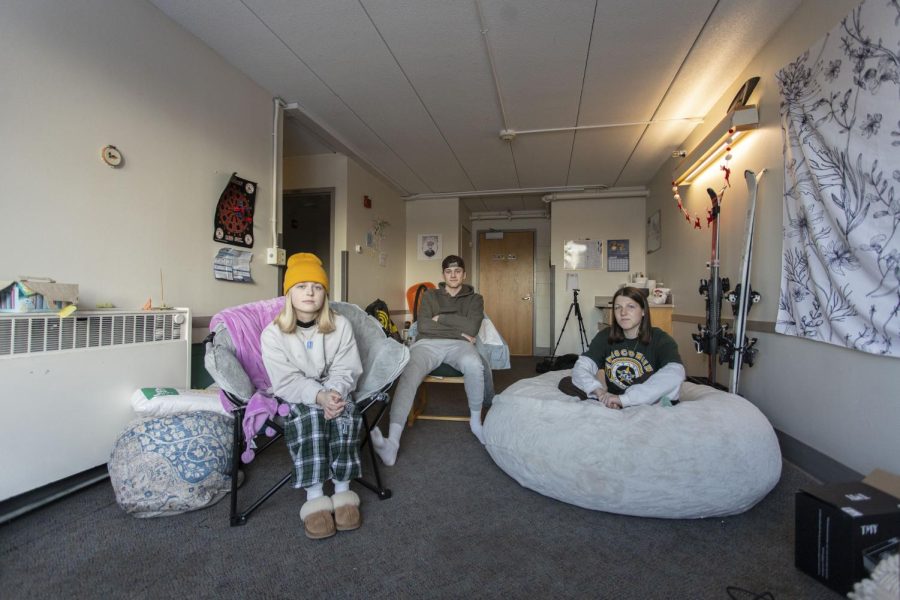 Suitemate first-years Royce Ankel, Will Armbruster and Brenna Bushweller sit in their suite located in Living/Learning D on Jan. 20. They returned from winter break to realize someone broke into their dorm rooms.

Students at UVM reported eight burglaries to UVM Police Services when they returned from the winter recess, according to a Jan. 17 CatAlert.

Police reported five burglaries at the apartments in the Redstone Lofts North and three in suites at Living/Learning, according to the CatAlert. Police are investigating the possibility of the burglaries being connected.

The burglars stole 400 dollars in cash and 300 dollars in Amazon gift cards from first-year Peter North, he said. First-year Royce Ankel lost a bike, jewelry, camping gear and food to the burglar, she stated in a Jan. 23 text message. Both students live in the Living/Learning Center.

The information the police have is limited, including the identification of a suspect, according to UVM Police Chief Timothy Bilodeau. UVM Police Services are having trouble identifying when the thefts occurred.

“This window [of time] is well over a week,” Bilodeau said. “It could be several weeks [so] we don’t know when the actual entry occurred.”

UVM Police Services worked with impacted students by going through their trash and checking for fingerprints, Ankel said. Police asked questions about the break-ins and had impacted students send pictures of items that were stolen.

When Ankel first reported her room for a break-in, she felt that UVM Police Services did not take her case seriously.

“I felt a little bit disregarded when [police thought] it was only my room that was known to be broken into,” Ankel said. “I do feel like after all of these other break ins were reported, they’re taking it more seriously.”

Ankel does not feel upset about the situation, other than the fact that a few stolen items had sentimental value, she said.

People who were robbed feel their private space was violated, Bilodeau said.

“[It is] naturally a rupture of trust and safety,” he said.

When North got to his room, he saw the door unlocked, which was strange, North said. He then opened the door and found that the room was trashed.

“There were papers all over the floor and the beds were messed up, all the drawers were open and my roommate’s safe was on his bed with the key in it,” North said. “We also knew of a break-in across the hall.”

The residential buildings are relatively secure with the understanding that there is a certain amount of freedom for students, meaning heightened security might be overbearing to their lifestyles, Bilodeau said. The CatAlert system benefits the security of the dorms.

UVM is not compensating the students for their stolen items, both Ankel and North said.

Students who believe their rooms were broken into may contact UVM Police Services at 802-656-3473.