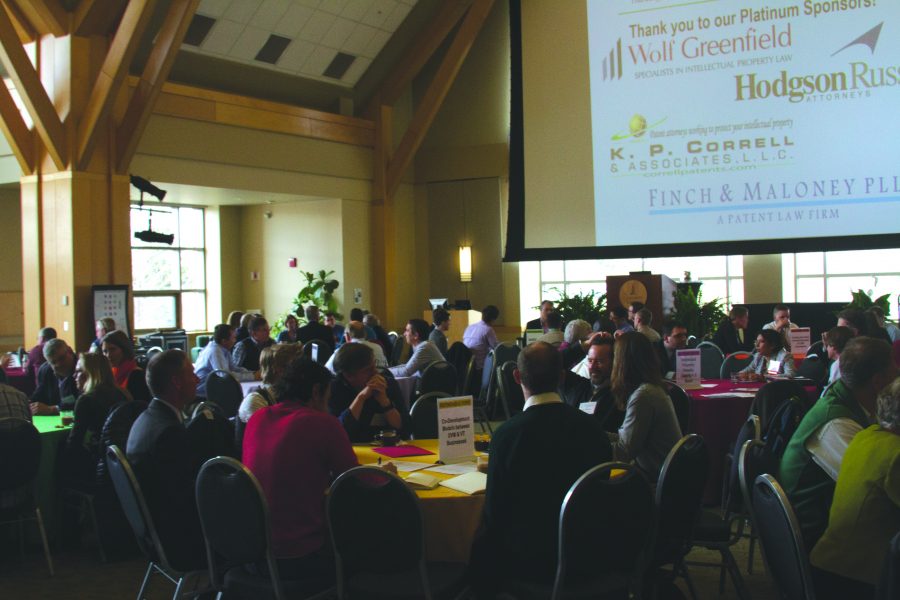 The Invention 2 Venture conference is pictured April 7. The conference focused on turning ideas and inventions into marketable products.

Craig Pelsor
Entrepreneurs and business experts from across New England flocked to the University April 7 for an annual conference.

The 11th annual Invention 2 Venture Conference was held in the Davis Center’s Silver Maple Ballroom, inviting students to network with various business experts and industry leaders, according to the event’s University Communications website.

This conference is held every year by the University’s Office of Technology Commercialization, alongside the Vermont Technology Council and the Vermont Center for Emerging Technologies, according to the website.

“The goal is to bring people together who in some way relate to what we do,” said Jason Powell of the Office of Technology Commercialization.

Powell emphasized the networking opportunities that the conference presents.

“It’s a good opportunity for people to meet people from all areas of the business world,” he said.

The event began with opening remarks from Provost David Rosowsky on the University’s “entrepreneurship ecosystem,” followed by awards for various patents and licenses received by members of the University and attendees.

The event’s keynote address titled “Power to the Internet of Things” was delivered by UVM alumnus Robert Andosca.

The address was followed by roundtable discussions on a number of different topics relating to business strategy and entrepreneurship.

Andosca founded MicroGen Systems in 2007, receiving his Ph.D in Materials Science Engineering from UVM in 2012, according to MicroGen’s website.

Microgen has become one of the largest designers and manufacturers of nanotechnology and MEMS used in wireless sensors and mobile electronics, according to the corporation’s website.

MEMS stands for microelectromechanical systems which are small devices such as nanochips, according to Microgen’s website.

His speech covered the process of founding his corporation and the devices they created called Bolt and Vibe.

The devices are small chips that can collect data and produce enough electricity to sustain themselves for use in tires, cars and shoes, with a growing market for the future, Andosca said.

These devices are smaller than a quarter and can last for more than 20 years, according to MicroGen’s website.