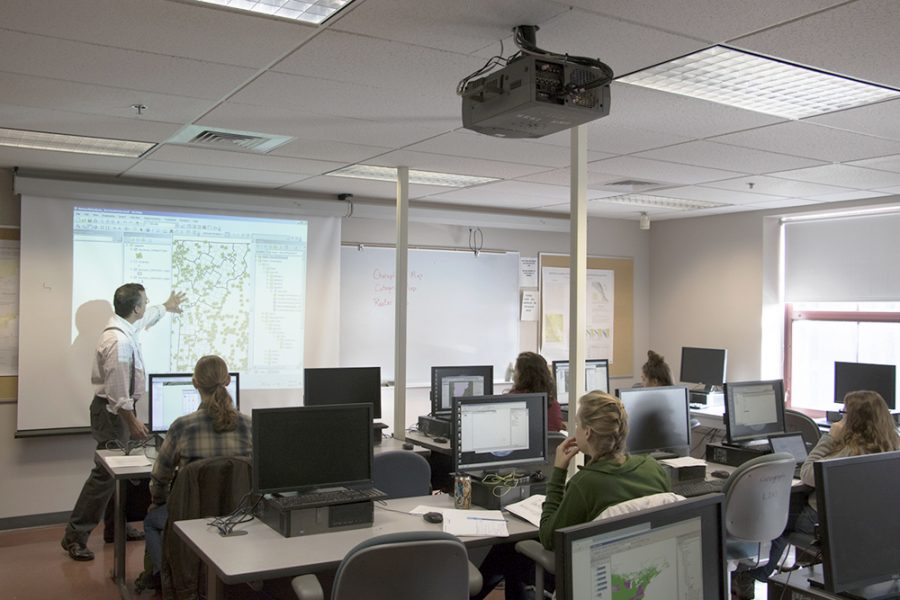 Students work in a geology lab in Lafayette Oct. 2. Waste from the bathroom leaked through the ceiling tiles into the classroom below. The tiles have been replaced. RYAN THORNTON/The Vermont Cynic

A recent flood in Lafayette Hall proved the reliability of UVM’s custodial department when a urinal in the 3rd floor men’s bathroom overflowed, endangering computers and equipment in a downstairs geology lab room.

UVM’s physical plant, the department in charge of repairs and maintenance of academic and housing buildings, responded to a plumbing issue in Lafayette Hall’s third floor men’s bathroom on September 17th.

This incident occurred around 4:30 p.m. said Sal Chiarelli, director of the physical plant.

“The cause of the flood is still unknown. It can be malicious, accidental, equipment failure, or in most cases, operator error,” he said. “In this case, as well as many other cases we’ve seen, the exact cause is not known as individuals involved usually do not stick around.”

Geography professor Lesley-Ann Dupigny-Giroux was teaching in the Geography Geospatial Technologies lab located in 203 Lafayette, immediately below the men’s bathroom, when the flood occurred.

“I was teaching my Satellites, Weather and Climate program to K-12 teachers at the time.” said Dupigny-Giroux. “The ceiling leak lasted for about 40 minutes during which time I contacted both the flood emergency number and Police Services.”

As the urinal leak was fixed within hours, most students were unaware of the incident.

“I didn’t hear about the flood at all,” sophomore Silas Pierpont-Hale said. “Most of my classes are in Lafayette, but I wouldn’t have been around to see it happen at that time of day.”

“We responded to the report and performed the necessary repairs,” Guy Shane, the University’s academic, administrative and athletic zone manager said. “Custodial can confirm the restroom was opened, sanitized and available for use early Friday morning. It was closed for no more than an hour or two.”

A rumor about mold spreading into Lafayette classrooms was debunked by Shane, who confirmed that there has not been any mold in this restroom.

“I haven’t come across any damage in the Lafayette bathroom,” junior Adrian Pascual said. “I’ve gone in there since that date, and everything looks normal.”

Chiarelli wasn’t concerned about the leak. “These types of issues routinely occur when you have 15,000 people on campus every day operating toilets, sinks, showers, urinals and water fountains,” he said.

Because of the quick cleanup and repair work done by custodial staff, Dupigny-Giroux’s lab was able to be used again later in the week, and her class did not lose any face-to-face contact time, she said.

Editor’s Note: A previous version of this article stated that the flooding took place in a geology lab. This has been corrected.