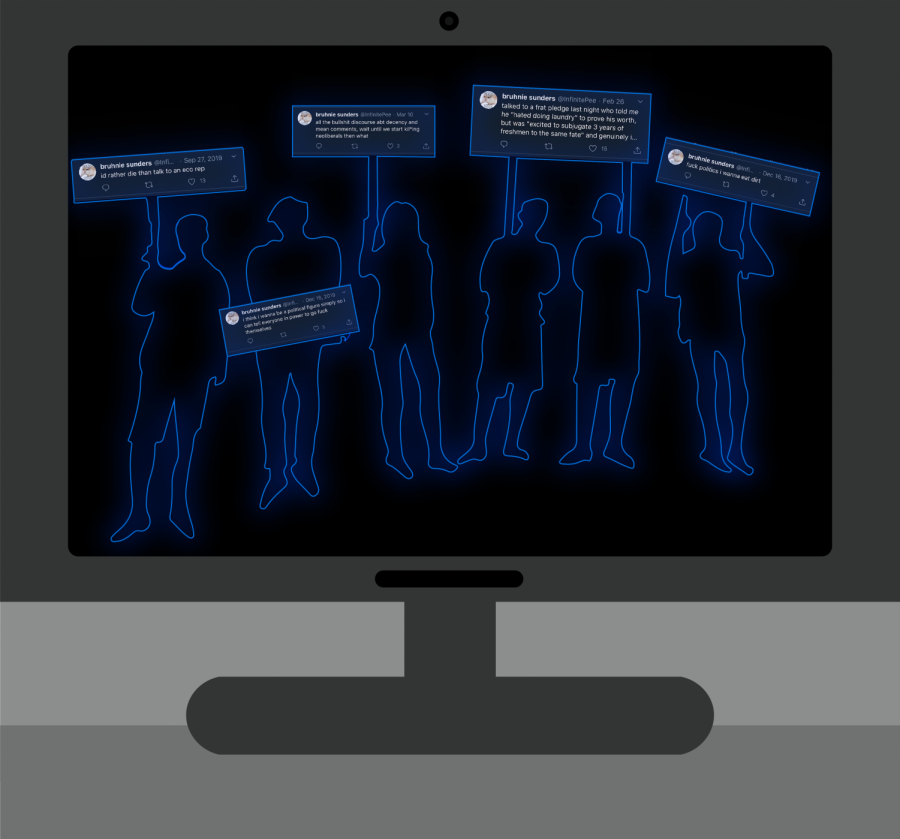 After facing backlash for controversial tweets, the SGA president-elect apologized and said he hopes to mend his relationship with people that were hurt by his comments.

Junior Ben Bieri, who won the election for SGA president March 28, apologized later that day on social media for tweets of his that had received criticism from some members of the UVM community.

Much of the backlash came from members of Fraternity and Sorority Life because of Bieri’s tweets that were aimed at its members, including one tweet about assaulting “frat boys.”

“Jokes about assault in any form shouldn’t be made,” Bieri said on Instagram Live. “They were bad things to say and I regret saying them, and I’m thankful for the people that did reach out and said they were hurt because that’s how I learn.”

Bieri’s tweets from weeks and months before the election began circulating on social media hours after the election results were posted, and a petition was soon made asking students to take action against Bieri.

Junior Brooke Bednarke, who has worked with Bieri in the past, said she was skeptical of Bieri’s apology.

“I don’t think that you can look back and say ‘oh yeah I’m sorry, I do take sexual assault really seriously but I also five months ago said ‘I have the god-given right to assault a frat boy,’” Bednarke said. “Those things just don’t go hand in hand.”

Bednarke also said her boyfriend is in a fraternity, which is one of the reasons Bieri’s tweets upset her.

Many UVM students voiced their criticism on social media.

An Instagram account featuring screenshots of Bieri’s past tweets was created. The account’s bio read, “a composition of tweets from the newly elected SGA president.”

Bieri said in the days following his win he received an overwhelming amount of direct messages on Instagram and Facebook and texts from unknown numbers reacting negatively to his tweets.

“There’s accountability, but then there’s what’s currently happening,” Bieri said in an interview March 31. “There has been a level at which people are trying to reach me individually and personally shame me.”

The petition was created by junior Maeve Clinton, a member of the sorority Tri Delta, and now an SGA senator.

On April 2, Clinton posted an update to the petition, stating that after she talked with Bieri, she felt he will now stand up for all students.

“We had a very honest and open conversation,” the update stated. “He apologized for the impact his words had. I believe that Ben is willing to stand up for all students on campus and fight for the greater good of the UVM community.”

The petition currently had over 450 signatures.

Clinton said she started the petition because she didn’t believe Bieri would represent all students after seeing the things he had tweeted.

“My intention is to question what his platform is saying,” Clinton said in an interview March 31. “He wants to be the voice for all students but it doesn’t seem like he would be willing to stand up for all students after reading those tweets.”

The administration got back to her and asked to speak on the phone, although Clinton said she hasn’t made plans to do so.

Bednarke said she has also been in contact with UVM regarding the tweets.

Bednarke said she submitted a bias report last week, including a screenshot of one of Bieri’s tweets. She was then told that two other people had reported Bieri for social media concerns as well, she said.

“I know it was a joke,” Bednarke said. “But that’s not something to me that you joke about, so that’s when I lost all trust in him.”

Bieri said he plans to reach out to the Panhellenic community and the Inter-Fraternity Council, the national leadership organizations for sororities and fraternities in the US, to make amends.

“Hopefully we can set up a meeting where I can talk to the various leaders to examine how I impacted their community,” Bieri said. “To see what I can do going forward and what work we can do to get progress past this.”

Clinton said she is optimistic about the progress being made.

“I think we’re on the road to coming together as a UVM community,” Clinton said. “I’m just one individual, but I think that there could be positive changes going forward.”

Bednarke said that she ultimately doesn’t think Bieri should be the leader of student government.

“I feel we should have someone in that position that people respect, and that respects other people,” she said.

Bieri said since he spoke with Clinton there has also been a decrease in the number of DM’s and texts he’s receiving, but he said he fears they will come back.

“If people want to have genuine conversations about what I did wrong and how things are going to be different going forward, I’m available to those,” Bieri said. “But ultimately, if people are going to be overtly hostile or negative, it’s different.”

The backlash following Bieri’s win was only one part of this year’s unprecedented election.

After alumni were mistakenly allowed to vote when the election opened March 26, the election was forced to restart March 28.

Bieri also ran on the unique platform of abolishing SGA, the organization he was elected to lead and establishing a student union instead.

“I’m happy that progress is being made to rectify what’s happened,” he said. “And I’m appreciative that people like Clinton have voiced their concerns about things I’ve said and are willing to have conversations with me.”