The Vermont Cynic • May 20, 2021 • https://vtcynic.com/news/former-fraternity-house-vandalized-amidst-campus-wide-outrage-over-sexual-violence/ 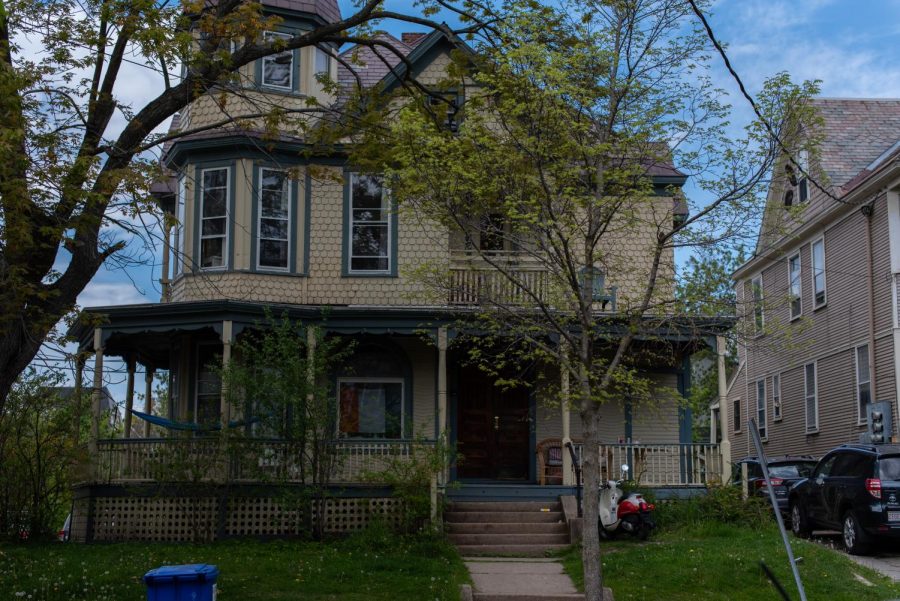 The vandalised home at 86 Buell street photographed May 16.

Editor’s note: This story was updated at 5:15 p.m. May 25 to correct the spelling of Pi Kappa Phi.

The recent vandalization of a former fraternity house could be linked to the growing movement surrounding sexual assault awareness that has overtaken the UVM community.

The residents of 86 Buell Street took to Facebook on May 6 after their property had been broken, to state that their house is no longer affiliated with Alpha Epsilon Pi, an unrecognized fraternity that formerly rented the house.

The current renters stated in the post that their property had been vandalized the same night that several other UVM fraternity houses were targeted, the night of April 31.

Senior Camryn Jankowsi said she and her roommates woke up on May 1 to find their picnic table dismantled on their front lawn and a shattered lamp on their front porch.

“Just wanted to send a quick message that AEPi is no longer affiliated with this house on Buell street!!” stated senior Nora Brown in the Facebook post. “We don’t condone or support any act of sexual violence and we stand with survivors!”

Initially, Jankowski did not speculate that the damage was meant to target the fraternity that rented the house the previous year, until she learned another fraternity had been targeted the same night, she said.

She also said the house had a history of being subject to misconduct, including finding a bag of dog poop on the porch after moving in.

There have been 25 vandalism complaints since the end of April, according to a May 17 email from Matthew Sullivan, Burlington police department’s deputy of administration.

The most recently reported incident occurred on May 1 when several vehicles were damaged at the Pi Kappa Phi Lambda Iota house, according to Sullivan’s email.

This took place after the Instagram account @shareyourstoryuvm leaked an anonymous submission of Pi Kapp’s “brotherhood survey,” which contained language that many viewed as misogynistic and perpetuatory of rape culture.

There was also an uptick in vandalism on UVM’s campus, according to a May 17 email from Tim Bilodeau, UVM’s chief of police.

“We did have mostly sidewalk chalking and some spray painting the last few weeks,” Biolodeau stated.

AEPi, the fraternity that used to reside on Buell Street, was suspended in 2014 for hazing and alcohol violations, according to UVM’s website. Their suspension was initially set to end in 2019, but was later extended through 2022, for violations of sanction.

AEPi had their suspension extended following the death of a student who had attended an event at their house that night, according to an April 2019 Cynic article.

Derecognition prevents AEPi from programming or recruiting on campus and from participating in UVM Fraternity and Sorority Life activities, according to the University’s website. Although AEPi is not recognized by UVM, they are recognized by their National Organization.

“We are opposed to vandalism and destruction of private property and hope that the residents of that house take appropriate measures to ensure their safety,” Jonathan Pierce, AEPi’s national media spokesperson, stated in a May 7 email.

However, the fraternity has not reached out to the current residents directly about the incident, said Jankowski.

Pierce’s email also stated that AEPi firmly opposes sexual misconduct and abuse and that if a brother of a fraternity is found guilty of sexual assault, the organization will immediately start the process of expulsion.

“I think it’s wonderful to see that fraternities are making changes when a few of their members are not upholding the guidelines that they want to promote,” Jankowski said. “But I still think a lot more needs to be done and hearing about the walkout and having that happen was really really spectacular.”

On May 3, students staged a school-wide walkout to raise awareness and to advocate for systemic reform over the handling of sexual assault reports at UVM, according to a May 4 Cynic article.

Senior Cobalt Tolbert, a member of the UVM Union of Students and one of the organizers of the walkout, said that while it’s unfortunate that people are resorting to property damage and vandalism, there’s going to need to be a lot of conversation about where people’s priorities are.

“A lot of it is sort of survivor’s saying ‘if you’re this upset over property damage then imagine how upset we are when our bodies get damaged, when you are broken apart and no institutional help is on the way,’” Tolbert said.

Pierce’s email stated it is unknown whether any members of AEPi participated in the walkout, but that the organization supports any non-violent attempts to raise awareness about sexual assault and harrassment and supports educational programs to help prevent it.

The fraternity continues to look for partners to provide trainings concerning issues such as bystander intervention and sexual harassment identifcation, Pierce’s email stated.

“While Alpha Epsilon Pi is not an SGA recognized organization, they are held to the same standards of local state laws, the University’s code of conduct and Alpha Epsilon Pi’s Health and Safety Guidelines,” Pierce’s email stated.

The AEPi Health and Safety Guidelines state that the fraternity aims to provide a secure and respectful atmosphere for all of AEPi’s Brothers, visitors, neighbors and community, according to the AEPi website.

“As a Jewish fraternity, one of the values of our teachings we hold most important is that all human beings are fashioned B’tzelem Elohim, in the image of G-d,” Pierce’s email stated. “Therefore, it is wrong to treat anyone without dignity, no matter their gender, race, sexual orientation or religion.”

Although Pierce stated that the national chapter supports educational programming to raise awareness and prevention strategies for sexual assault, only recognized fraternities at UVM are mandated to offer such trainings.

The Director of FSL will enforce every recognized UVM Fraternity’s attendance at sexual violence, harassment, or healthy relationship trainings, once each semester, and report chapter attendance rates, according to a May 19 email from Provost Patty Prelock and Vice Provost Erica Caloiero.

“Should Fraternity attendance rates fall below 70% for 2 consecutive semesters, we demand that the Director of Fraternity and Sorority Life place said Fraternity on probation effective immediately,” the email stated.

The current officers of the UVM-based chapter of AEPi declined to comment when contacted by the Cynic.