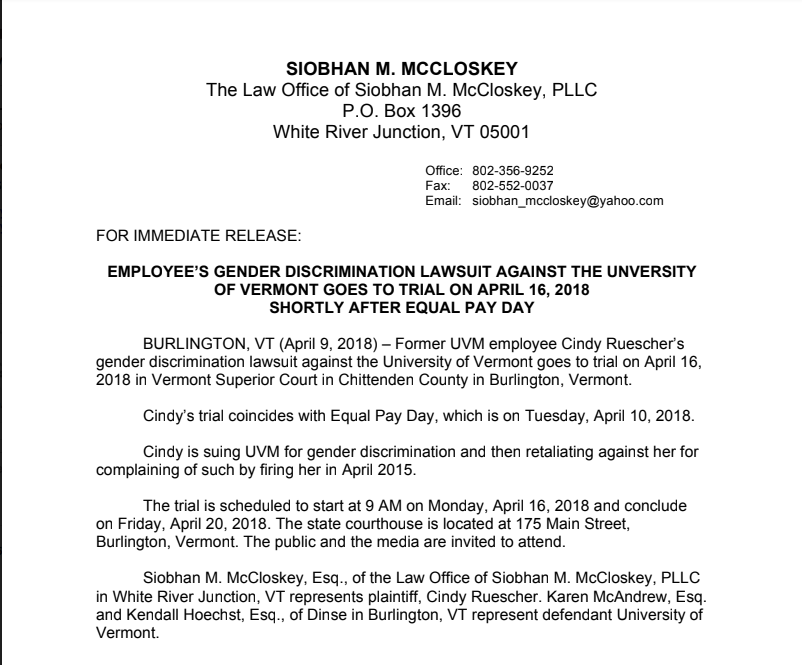 A gender discrimination lawsuit from a former UVM employee will go to trial Monday, April 16, according to an April 9 press release from a local lawyer.

Cindy Ruescher, who was fired from UVM in April 2015, is suing the University for discrimination based on gender and then retaliation against her for complaining of the discrimination, according to the press release.

Ruescher filed a civil lawsuit against UVM in 2014 stating that UVM had violated the Equal Pay Act by paying Ruescher less than her male counterparts, according to a December 2015 Vermont Cynic article.

Ruescher claimed that there was “illegal retaliation” when she asked the University about the difference in pay between her and her male colleagues, according to the article.

The University denied the claims, and stated that her complaint did not go through the UVM “grievance procedure,” according to the article.

Situations in which a person is being discriminated against for their sex are “expressly excluded” from the UVM grievance process, according to UVM’s employment grievance policy.

She will be represented by the law office of Siobhan M. McCloskey.

Ruescher’s LinkedIn profile lists her as a computer programmer at The University of Vermont.

The trial is scheduled for 9 a.m. April 16 at the Vermont Superior Court in Chittenden County in Burlington, according to the press release.

The lawsuit will take place the week after Equal Pay Day, which is April 10.