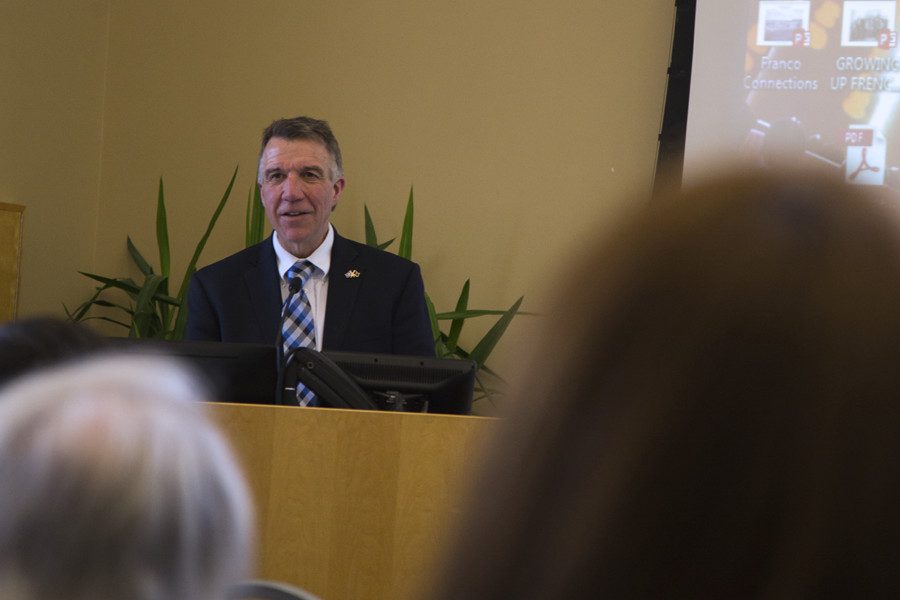 Gov. Phil Scott speaks at the French Canadian International Conference March 20 in the Livak Ballroom. The conference focused on Vermont and Quebec relations, immigration, and trade.

UVM hosted a conference on the connections between Vermont and its neighbor to the north.

The March 20 French-Canadian connections conference, focused on the relations between Vermont and Quebec. It featured speakers including UVM President Tom Sullivan, Gov. Phil Scott and Rita de Santis, the Quebec minister responsible for access to information and reform of democratic institutions.

As Vermont is Quebec’s most significant trading partner in New England and Quebec is the most important export market for Vermont, speakers emphasized the importance of the connection between Quebec and Vermont, according to the conference’s program.

“Yes, we will open our doors for those who seek a better life,” he said, “as it was true for the French-Canadians, it is true for the refugees”

The conference was designed to highlight the historical, cultural and economic contributions of French Canadians to Vermont and New England.

It focused on past history, present connects and the future French-Canadian immigration trends, according to the program.

“This [conference] is an opportunity to look back on our history and look forward to the dialogue and accomplishments that we can achieve with our colleagues from Quebec,” Sullivan said.

The story of the immigrants that have influenced the connection between both areas was also a main focus.

“It is that quality of any person who has the courage to come to the U.S. for a better life — that remarkable combination of hope, confidence and imagination — that is needed more than ever today.” Donovan said.

“It’s very encouraging to see leaders in the state and University to be so welcoming to other cultures,” sophomore Louis Augeri said.

Robert Bartlett, professor of political science, said the conference “appeals to people who are interested in more than just the language and culture.”

In closing, Gov. Scott said he is confident Vermont can continue its tradition of looking at what people have in common instead of pointing out their differences.

“Diversity makes us stronger; it makes us more understanding,” Scott said, “and it helps all of us grow.”
De Santis agreed, concluding her remarks with a translated proverb and a statement: “Alone we can run much more quickly, but together we go further.” She said “Let us make sure there are no walls between Quebec and Vermont.”