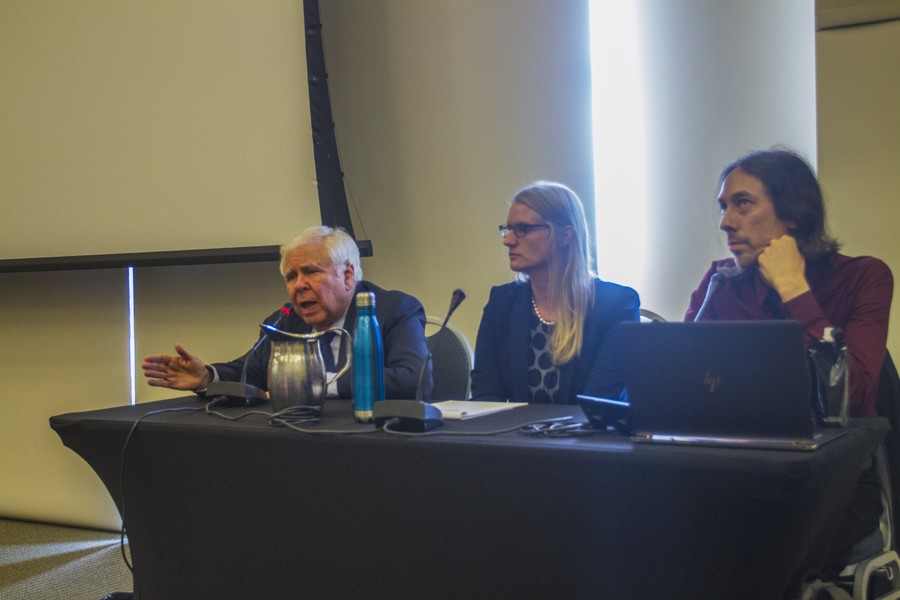 Students and community members packed the Livak Ballroom of the Davis Center while waiting to discuss gun control.

The forum is a group of UVM faculty that organizes panel discussions about controversial issues to encourage open and constructive debate, said Richard Vanden Bergh, director of the Janus Forum and professor in the Grossman School of Business.

“When we came up with the idea [for the gun control debate],” Vanden Bergh said, “there was a gubernatorial election in Vermont in which one of the candidates— the candidate who lost —supported increased gun control.”

Levinson, who is a professor of government, focused his argument on the constitutional and historical implications of the second amendment.

Though the individual’s right to bear arms is protected by the constitution, the bulk of firearms legislation is left to the states, and most states have gun rights in their own constitutions, he said.

“If you’re interested in firearms, find out what your state constitution and state legislature says about it,” Levinson said.

Levinson also raised concerns about how convicted felons are prohibited from owning guns, regardless of whether they committed a violent or non-violent offense, which he referred to as the “Martha Stewart problem”.

Martha Stewart, a television personality who has amassed considerable wealth, is unable to protect herself and her estate with a firearm because she was convicted of obstructing justice during an investigation of insider trading in 2004, Levinson said.

Huemer spoke about the moral questions behind gun control, equating governments restricting gun possession with the crimes committed against people who would otherwise use them in self-defense.

The debate in moral philosophy is whether you can limit rights in the name of the greater good, he said.

People should be allowed to be able to defend themselves with firearms, he said.

After the state of Missouri repealed its law requiring people to have  permits in order to purchase  firearms, the number of firearms involved in violent crime that could be traced back to the state increased, she said.

Crifasi, who has a concealed carry license in Utah, said it doesn’t make sense to ban guns or have super-strict limitations on them.

“We are in a country that is going to have guns,” she said. “We need to cultivate moderate gun owners and shift the culture war to a discussion about safety.”

If you follow the rules of the land, you should be allowed to own guns, Crifasi said.

The majority of Americans agree that people have a right to bear arms but that there is also reason for some limitations, Levinson said.

Senior Carolyn Hopkins attended the debate because it was a requirement for one of her classes and because she found the material intriguing, she said.

“It’s an interesting issue,” Hopkins said, “especially since we live in a state that has a lot of guns but very little gun violence.”

Correction: A previous version of this story stated Dr. Crifasi has a concealed carry license in Maryland. The correct state is Utah.