The Vermont Cynic asked UVM groups what they thought about the reemergence of white nationalist stickers on UVM’s campus. Here’s what they said. 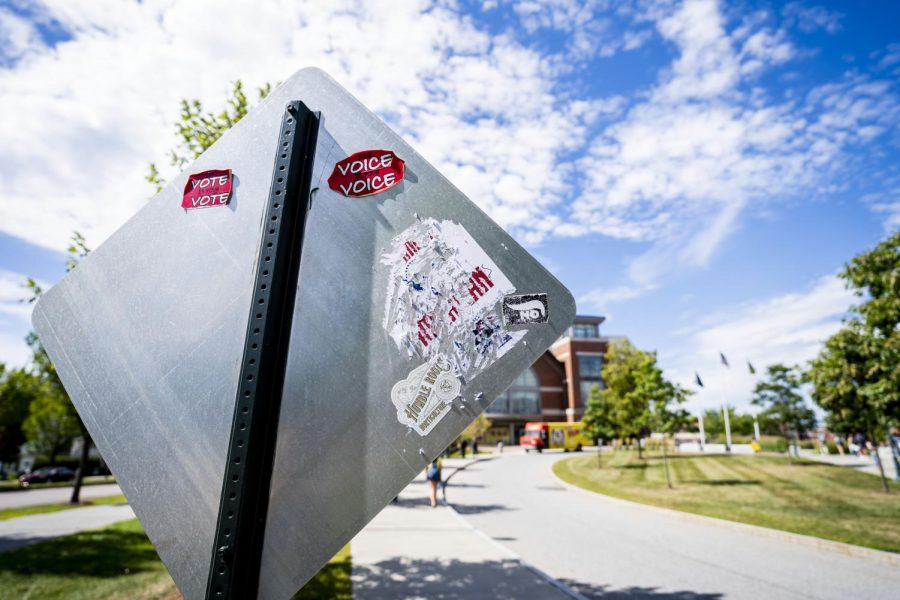 White nationalist stickers and posters once again surfaced throughout UVM’s campus, prompting the community to react.

UVM Police Services found multiple stickers and posters from the group Patriot Front, who were designated by the Southern Poverty Law Center as a “white nationalist hate group,” Aug. 27.

The stickers found around campus read “Keep America American” and “Better Dead Than Red,” according to UVM Police.

At least one sticker was found outside the Davis Center, but as students passed by they left their own messages against the group.

This isn’t the first time these stickers have shown up in Burlington or on UVM’s campus. In February and October 2018, white supremacist posters were found across UVM and Champlain College’s campuses.

In February 2019, Patriot Front stickers were found on a Burlington synagogue and the Pride Center of Vermont, according to the Burlington Police Department.

In response, The Vermont Cynic asked UVM groups what they thought about the reemergence of stickers on UVM’s campus. Here’s what they said:

“The appearance of the white nationalist posters on our campus is simply a reminder to us all that this is not a safe campus. Every year we encounter similar issues, but we will continue to be here for the community, and our voices will not be silenced.”

“The QSU is disgusted by the actions of the individuals who posted white nationalist hate speech as well as Patriot Front as an organization. We recognize how painful and frightening this is for many members of our community, especially people of color, indigenous people and immigrant communities.

QSU will not stand for racism and white supremacy on our campus and in our community and insist that more action must be taken to protect students of color. It is our goal to work with other identity-based groups on campus to combat racist ideas and behaviors both in our UVM clubs and in the greater Burlington community.”

Editor’s Note: This is senior Tori Biondolillo on behalf of UVM College Republicans.

“This is absolutely disgusting and a reason why as chairwoman I was a chief proponent of a resolution by the CRNC [College Republican National Committee] denouncing white nationalism in the Republican Party. In short, here is my comment:

I am absolutely appalled that white nationalist groups are trying to stoke fear and hatred on UVM’s campus. It is absolutely, unequivocally unwelcome in our organization. Any person who holds these views should have no place in either party.

These views are hurtful, unproductive and un-American. Content like this is cancer on the American political discourse and downright makes students feel unsafe. I want to be clear in saying that although this may or may not be a right-wing group, I will not tolerate this in my own organization at the chapter, state or national level.”

Editor’s note: This is President Hannah Rose Arafeh, a sophomore, speaking on behalf of SAS.

“It [the Patriot Front sticker]is certainly upsetting. I cannot, however, say that it totally surprises me. The University and Burlington can be very insular in their liberalism: so much so, in fact, that many white students feel that just because they attend such a ‘liberal’ university, that they are somehow absolved of their own contributions to and privileges from systems of oppression. There is an undertone of, ‘it can’t happen here.’

Not only can it happen anywhere, but it did happen here. Several times now. Burlington and the University of Vermont are no exception to the rising wave of white supremacy and white nationalism that are coming to a zenith in recent years just because of its liberal reputation and the majority left-leaning students.

This incident should be a wake-up call that just attending this liberal University is not enough; not being racist isn’t enough. Active anti-racism and joining the fight against white supremacy is necessary to combat this.”

The University of Vermont:

“The Southern Poverty Law Center has designated Patriot Front as ‘a white nationalist hate group.’ We denounce its racist ideology and tactics, which deliberately target people of color and run counter to our core values as a University community.”