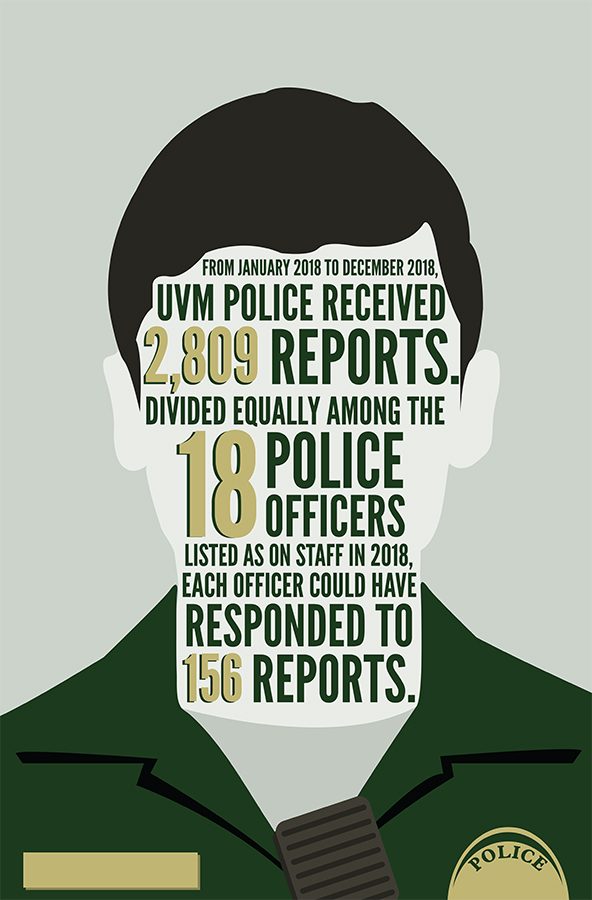 Currently, UVM Police Services has 18 officers listed on their website including the chief, two deputy chiefs, two detectives and four sergeants. From January 2018 to December 2018, UVM Police received 2,809 reports.Divided equally among the 18 police officers listed as on staff in 2018, each officer could have responded to 156 reports.

With their contract expired, UVM Police Services is using the opportunity to negotiate a new contract with the University to help recruit and retain officers.

But, as UVM Police Services remains understaffed, some on campus remain alarmed over the department’s ability to keep UVM safe.

UVM Police Services has not had full staffing for six years, according to acting Police Chief Tim Bilodeau. But Bilodeau remains confident that the salaries and benefits in the contract are competitive with other agencies in Vermont, he said.

UVM Police Services’ website has had a police officer job listing posted since 2014.

“There’s just an enormous amount of people, the work itself, the competitive jobs that are out there…there’s many reasons why people get out of the business,” Bilodeau said. “It’s a tough sell.”

Junior Molly McKenna, an RA, said she is scared that understaffed police will put students in danger. She said she sees significantly fewer police cars on campus than during her first year at UVM.

“I feel like the problem [public safety] is just getting worse and worse,” McKenna said. “It’s frightening.”

When McKenna asked a police officer to do a self-defense class for her residents, the officer said she wasn’t able to do them anymore because there was no one to take her night shift, McKenna said.

The new contract hasn’t been released yet because it is not finalized, Bilodeau stated in a Sept. 12 email.

UVM Police Services has struggled to recruit and retain employees over the years. This could be because of its constant demands, which include working holidays and writing more detailed police reports than other agencies, Bilodeau said.

The small pool of officers in Vermont has also made it hard to maintain a full staff, he said.
“In such a small state… it becomes a pretty competitive market pretty quick,” Bilodeau said. “How we give them benefits packages and things like that allows us to become competitive with each other.”

Understaffing at police departments is a growing issue across the country. This could be due to low unemployment and a highly competitive job market, according to a Dec. 2018 NPR article.

It could also be due to the younger generation’s job preferences, according to the article.

While UVM Police Services struggles to hire new employees, Chief Lianne Tuomey remains on indefinite paid leave with no explanation as to why, according to a Sept. 10 Cynic article.

But Bilodeau remains optimistic that Tuomey’s absence will not have a negative effect on recruitment, he said.

“What I can say is that I think we have a group of very professional police staff here. We were working on [a recruitment strategy] before, and we’re certainly working on it now,” Bilodeau said, when asked if Tuomey’s absence has had any effects on recruitment.

UVM Police Services advertises its employment opportunities on the main page of their website. Additionally, they have job listings on the Vermont official state website and LinkedIn.

“We’ve developed a pretty decent marketing campaign around really being clear about our benefits and what our pay is,” Bilodeau said. “We’re confident that we’ll get our folks back to the level that we like to because we want to operate with everything going for us.”

Divided equally among the 18 police officers listed as on staff in 2018, each officer could have responded to 156 each.