The Vermont Cynic • May 31, 2020 • https://vtcynic.com/news/hundreds-protest-police-brutality-in-bulington-as-part-of-nation-wide-outcry/ 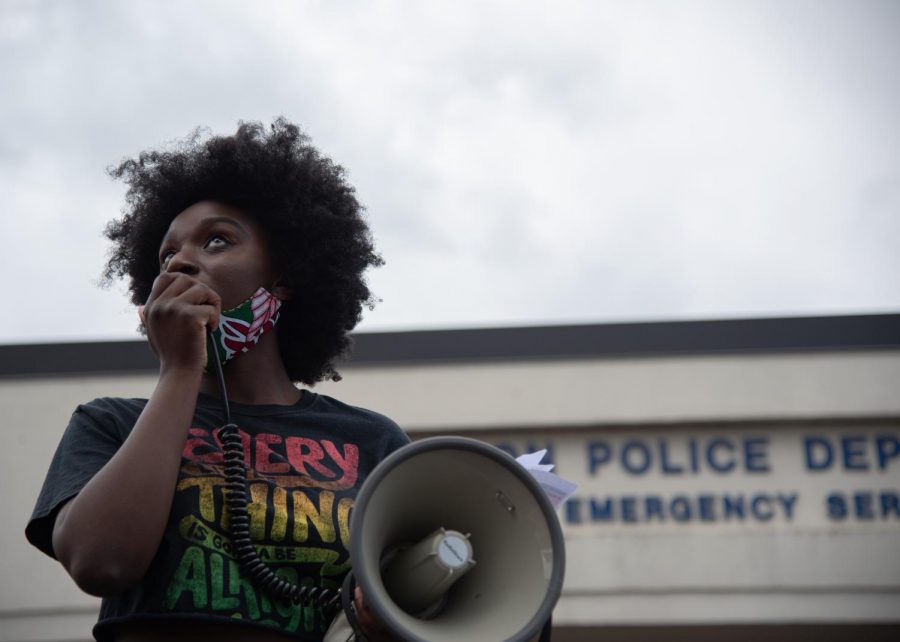 Protest organizer Harmony Edosomwan stands on top of a blue pick-up truck speaking to the crowd with a megaphone at the May 30 protest.

As cities across the nation protest racial injustice, hundreds gathered in Burlington to speak out against the city’s Police Department and its treatment of black people.

The protesters gathered at 6 p.m. May 30 in Battery Park to support the Black Lives Matter movement in wake of the murder of George Floyd.

“Everyday black folks have to explain our reasons for why we deserve to exist. I’m tired of that,” said Harmony Edosomwan, a leader and organizer of the event who recently graduated from UVM.

In the week following his death, nation-wide protests and riots erupted, some becoming violent, prompting state governors to call on the national guard.

Shortly after the protest began, Edosomwan took the stage and asked for a moment of silence.

“I would like to proceed with having a moment of silence for George Floyd, and for every other black and brown person fallen on the hands of white supremacy and racist pigs,” she said.

Seven minutes after Edosomwan began speaking to protesters, she was interrupted by a man without a medical mask who came onto the stage and began to shout at the crowd.

The facebook page for the event said wearing a mask was a requirement for safety reasons due to the coronavirus. Almost all of the people at the protest were wearing masks.

“You wouldn’t let me speak. You are fraudulent,” the man said. “What matters is black lives, white lives, yellow lives, green lives…”

The man’s voice was drowned out by the crowd yelling and telling him to get off the stage.

“If black lives truly matter why would you take the stage of a black person?” said Edosomwan after five people escorted the man off the stage.

When members of the de-escalation team attempted to approach the man he yelled at them to stay back because he was not wearing a mask.

Eloho Obaro-Best, a protester and organizer at the event who helped deescalate the second interruption said this man used the coronavirus as a weapon.

“He knew exactly what he was doing,” she said. “It just goes to show you that people would use any form of violence against black and brown people, this time it didn’t come with a gun or physical force, but rather a very contagious and deadly disease.”

After several activists gave speeches at Battery Park, the protest then began marching towards the Burlington Police Station.

Edosomwan led the crowd with her megaphone as she stood on top of a blue pick-up truck and read a list of times the Burlington Police Department used excessive force and violence with black people.

She called out Sgt. Jason Bellavance and Sgt. Cory Campbell by name, both Burlington Police Officers who were accused of using excessive force after body cam footage from two separate incidents showed these cops knocking unconscious two black men suspected of starting fights according to a May 2019 Seven Days article and a Jan. 3 2020 VTDigger article.

The crowd made a thin path towards Edosomwan walled with densely packed bodies for Morrison and deputy chief Jon Murad. The two came outside the Station after protesters chanted their names.

The protesters cheered, chanted and shouted over the police chief as she tried to answer Edosomwan’s questions.

Chief Morrison appeared to be showing signs of discomfort, which Edosomwan recognized. “You must feel very inconvenienced to be surrounded by hundreds of people, and there’s a lot of black people so you’re probably really nervous,” Edosomwan said.

Edosomwan called out Chief Morrison to listen to the cries of the protesters.

“If another black or brown person is murdered we have to act one again,” Endosomwan said in her closing remarks at the protest. “This is not a one and done.”

UVM president Suresh Garimella sent an email to the UVM community May 30 that referred to the killing of George Floyd, although it did not use his name.

“I have personally struggled to process the senseless actions on that video,” he stated. “As a citizen, husband, father and friend, I stand in solidarity with all who are saddened and outraged by the events of this week.”

Obaro-Best who recently graduated from UVM said she was disheartened Garimella did not use Floyd’s name.

George Floyd is another black life, black body, black death and he deserves for his name to be known,” she said. “Suresh Garimella is a person of color and his voice matters, he has a microphone that he’s not using.”