Is UVM really the No. 1 cannabis school? 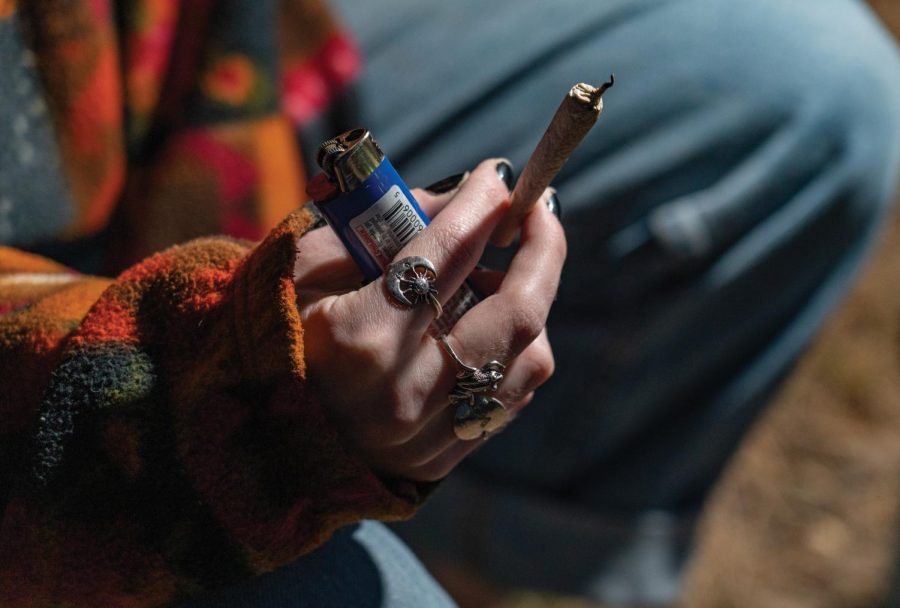 Most respondents to an April 11 Cynic survey don’t regularly smoke cannabis themselves, though they feel their peers regularly do.

In 2019, the Princeton Review ranked UVM as the No. 1 university for smoking cannabis, according to an Aug. 15, 2019 Cynic article. However, of 65 students who responded to the survey, 58.1% said they don’t regularly smoke.

“I think there are a lot of people who come to UVM [who] already [smoke] weed and when they get here, the culture encourages them to do it even more,” a student stated in the anonymous survey. “Oftentimes people try it out just to fit in with the culture as well.”

Sophomore Peyton Applegate does believe a lot of students use cannabis, but she believes people think the amount of smokers is higher than it actually is, she said.

“Most people I know started smoking before coming here, but the amount that they’re smoking has definitely increased since being here,” Applegate said.

Applegate said she smokes regularly. She believes using cannabis both recreationally and medicinally has a positive impact on her.

The reputation of the University surrounding cannabis use can attract or deter prospective students depending on the person, though it hasn’t had an impact on Applegate’s experience, she said.

Additionally, while a lot of Applegate’s friends do smoke regularly, many of them have never felt peer pressured to engage in smoking, she said.

The University’s reputation coincides with how people think of Vermont as a state, which contributes to the perception that it has of a lot of students who smoke frequently, sophomore Josie Beauregard said.

“My perspective is you let people do what [they want] to do,” Beauregard said. “I think it’s great that there’s [a] kind of culture.”

Cannabis use on campus did not change her opinion about the University. The smell is the main issue other people have a problem with, but it is something Beauregard said she has gotten used to.

“As people are coming to college for the first time and getting to do things that they wouldn’t get to do at home, it’d be maybe a reason that they would like [smoking weed],” Beauregard said.

Another student from the survey stated frequent smoking is immersed in the culture of UVM, though they wish it wasn’t normalized so heavily because it increased their smoking habits in their first year.

Eighty-eight point nine percent of students who answered the survey stated they have friends who smoke regularly, and 92.1% stated they think a lot of people smoke at the school.

“I think it is a thing where the normative perception of what others are doing does not align with what […] students tell us that they themselves are doing,” said Thomas Fontana, the alcohol, cannabis and other drugs initiatives manager with the Center for Health and Wellbeing.

The list of universities that have a reputation for students frequently smoking cannabis resembles the list of liberal colleges, as support for cannabis correlates with liberal values, Fontana said.

Engaging in cannabis use for first-year students is appealing primarily for the social experience rather than the actual high, Fontana said. The act of getting high with other people is widely perceived as being fun and social.

Additionally, there is an assumption that everyone engages in smoking regularly since students are aware that people commonly try cannabis and some of their peers smoke frequently, Fontana said.

“lf not smoking cannabis had a smell, then the normative perception would be equal because you [say] ‘shit, I smell people not smoking weed all the time,’” Fontana said.

Due to the COVID-19 pandemic, the Princeton Review could not adequately survey the appropriate number of students about their campus experiences, Krier stated.

The Princeton Review surveys college students countrywide on an annual basis to build rankings pertaining to academic and social life at universities, according to an Aug. 9, 2019 VTDigger article.

The Review issues a score to each college based on its students’ responses to each survey question,  according to the Princeton Review College Ranking for Methodology webpage.

The score is a statistic that gives a numerical basis to compare student opinions from college to college, according to the Princeton Review College Ranking for Methodology webpage.

The Princeton Review calculates its ranking lists using these scores. Colleges that have a high level of consensus among their polled students on the topic make it onto one of the 62 top 20 lists, according to the webpage.

“[The Princeton Review survey] just kind of makes a joke out of [cannabis use],” Fontana said. “[It] should be more than that. It kind of adds to just making it harder to have a real conversation about cannabis.”

Some students use cannabis for medicinal purposes and wouldn’t want to trivialize that in the survey, Fontana said.

Every year, students gather on the Redstone green to smoke cannabis on 4/20 at 4:20 p.m., a tradition that is widely documented on Instagram and Barstool Sports, according to an Aug. 15, 2019 Cynic article.

Vermont legalized cannabis possession July 1, 2018 for people 21 and over, but the University standards do not allow it on campus, according to the article.

Fontana said he conducts a survey every year at the 4/20 event asking students one question: “did you smoke weed yesterday?”

“Our data reflects that most [UVM students] aren’t there and most people there aren’t even regular partakers,” he said. “And yet, the perception is this huge crowd. This is UVM.”

There is usually an estimated crowd of 500 students on the green, which is only about 5% of the student population, Fontana said.