‘It’s Okay to Be White’ posters linked to national effort 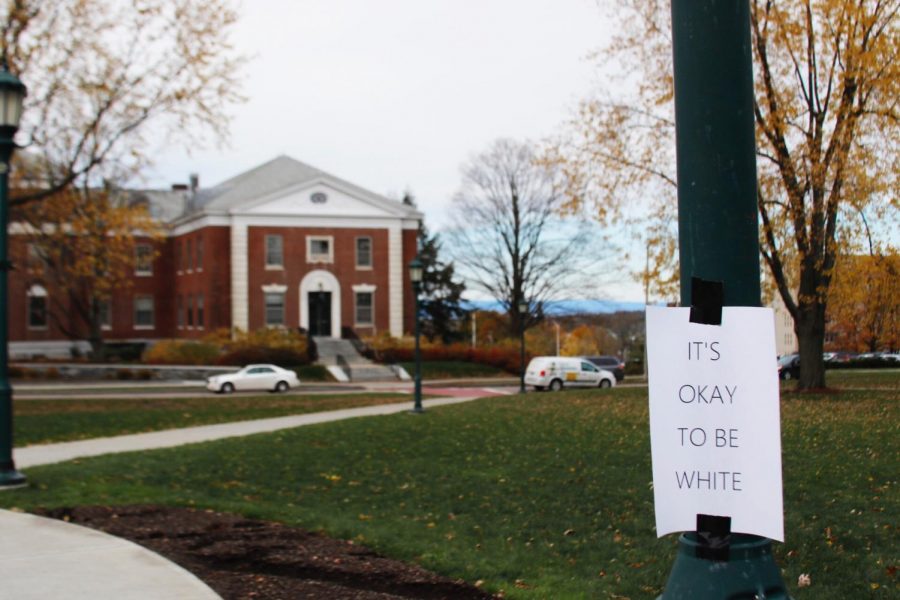 White pieces of printer paper featuring the phrase “It’s okay to be white” were posted around campus the morning of Nov. 7 by an unknown party.

The posters, which were taped to police blue lights, lampposts and doors, all read the same message before some were taken down by passerby.

“It appears that the signs were posted as part of a national effort,” stated Enrique Corredera, UVM communications director, in a Nov. 7 email. “They were removed because they were posted in violation of University posting policy.”

The signs, created as part of an online campaign to sow social unrest, have been seen at college campuses across the country, including Tulane University in New Orleans and in the Harvard Yard in Cambridge, according to a Nov. 3 Washington Post article.

“To the extent that the signs were intended to promote a white nationalist ideology, as news reports have suggested, we condemn the activity in the strongest possible terms, as it is completely antithetical to our core University values,” Corredera stated in the email.

The point of the statement is to show that the seemingly harmless poster would be accused of being white supremacy, according to the Post article.

Senior Siobhan Murray works as a building manager at the Davis Center. She said she did not know about the signs until she was informed by her boss.

“While obviously it’s OK to be white, the signs are stupid and at most slightly insensitive,” first-year Jace LaQuerre said. “The person doing this was probably just trying to get a reaction out of people or trying to be funny. Reading too much into harmless signs with a redundant message would be silly.”

Student leaders of diversity groups did not wish to comment at time of publication.