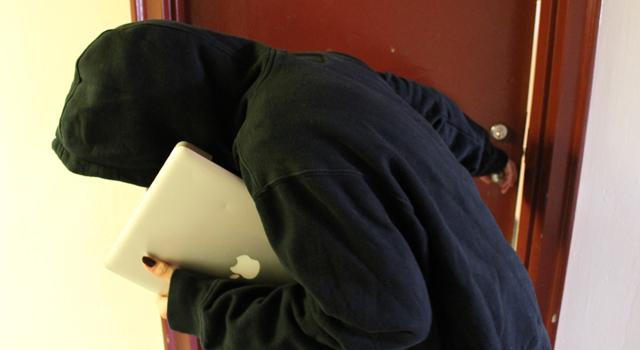 Recent laptop thefts have been a growing concern for UVM students.

However, the most recent theft attempt was  prevented by some student witnesses. The attempted theft took place in the Davis Center’s Mt. Mansfield Room Nov. 16.

Sophomore Becky Ngo was doing homework, and left her table to go to the bathroom.

Upon her return, a girl sitting at a nearby table came up to her and said ‘someone tried to steal your laptop,’ Ngo said.

Some students who witnessed the theft chased the individal and retrieved the laptop, she said.

One of these “laptop resucers” was junior Jon Tolen. As they were chasing the man, Tolen said that he yelled for people to call 911.

“So many people ignored us, and walked away and wouldn’t [help],” he said.

“I was angry that he just stole a laptop,” Tolen said. “He said he was going to stab us.”

Junior Dan Lane was the other student who helped retrieve the laptop.

“I had my laptop stolen this summer, so it’s actually pretty aggravating,” Lane said.

When Ngo’s laptop was returned she “cried even more and went up to thank and hug him for getting her laptop back to her,” she said.

“I am so thankful for these people risking to help a complete stranger and glad that I got my laptop back safely,”  Ngo said.

The individual was apprehended by police services officers after the incident. The name of the individual has not been released at this time.

The Cynic will be following up on this incident.

“We charged a person with petty larceny for taking a laptop,” said Lt. Larry Magnant of police services.

The individual will appear in court later this month, Magnant said. He encourages students to record serial numbers of all electronics and lock up valuables.

This is not the only incident to occur on campus in  recent weeks. Police services received a report of a burglary at 8:13 p.m. Nov. 2.

The burglary took place on the first floor of McAuley Hall between 7:20 and 7:50 p.m. The burglars entered the dorm room through a window, from the roof which was unoccupied at the time.

Several laptops and cash were taken from the room, according to the police report. Two weeks later, police have yet to make any arrests in the matter and it remains an open investigation, Magnant said.

First-year Matthew Werner lives in the dorm room that was broken into.

“We were all out of the room for a short time that evening, and when we returned, my roommate noticed the window screen sitting on the floor in front of our door,” Werner said.

“Initially, we thought our other roommate had gone onto the roof, but when I checked my desk to see if my belongings were still there, my laptop was gone,” he said.

The burglars also stole approximately $25 to $30 from one of the students living in the room, and stole the laptop of another student, Werner said. Since the incident, Werner said he and his roommates have had to purchase new laptops, as there is no compensation from UVM for the theft.

Recently fliers have been placed on various tables around Bailey/Howe Library warning of these thefts and urging students to  keep a close eye on their belongings. The flier cited recent reports of theft in the library as the cause for concern.

Students are urged to report any suspicious behavior they may see, the flier stated. In doing so students will  help in  “keeping the library safe for everyone,” it stated.