Living in the Sheraton 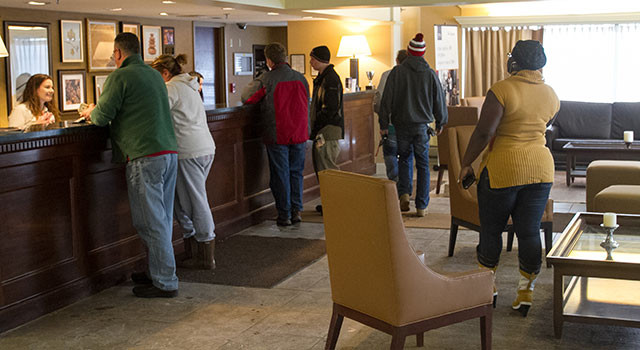 As the Housing Master Plan gets underway, Upperclassmen will face limited options for on-campus housing next fall.

“Due to limited space in the residence halls next fall, most students who are not required to be on campus will not have that option, but will have some exciting new ones instead,” according to a Feb. 12. ResLife email.

Students living in the Sheraton will be in double occupancy rooms furnished with residence hall furniture, according to the UVM Reslife website.

“I wouldn’t want to live there because to me it would not feel like I had a place that was my room,” junior Sonia Richmond said.

Students who are not required to live on campus have the option to request housing through ResLife, according to the email.

The only upperclassmen who are able to live on campus are students hired as RA’s, L/L or RLC program directors, transfer students who will not be 20 by Aug.28 and students in need of ACCESS housing accomodations, according to the email.

“I wouldn’t feel settled in and it would be weird living somewhere that feels so temporary,” Richmond said.

The rates for the Sheraton will be the same as a private double occupancy room, the website stated. The rooms will have a private bathroom, a flat screen TV and cable, according to the website.

Students will receive 50 percent off of Sheraton food and beverages, according to the website. This excludes alcohol, however students over 21 can drink alcohol in the Sheraton Hotel, despite UVM being a dry campus.

The Sheraton is on the CCTA bus route, and you can ride free with your UVM ID, the website stated.

“You’re farther from downtown and the nightlife,” Junior Kyle Elliott said. “You’re out of walking distance.”

“I think it’d be a nice place to stay, better rooms than the dorms. But the distance from campus and downtown would probably make it like Trinity, where people feel sort of isolated from campus,” sophomore Jasmine Jiron said.

“But hotel rooms would be so much nicer than the shoeboxes,” she said.

Sophomore Taylor Bell sees some disadvantages to living in the Sheraton.

“I think the disadvantage is that you’re off-campus,” she said. “I would miss my friends.”

However, she thinks its nice that the Sheraton is furnished, and has cable and private bathrooms.

“I think the private bathroom would be huge,” Elliott said. “But the social life would be lacking.”