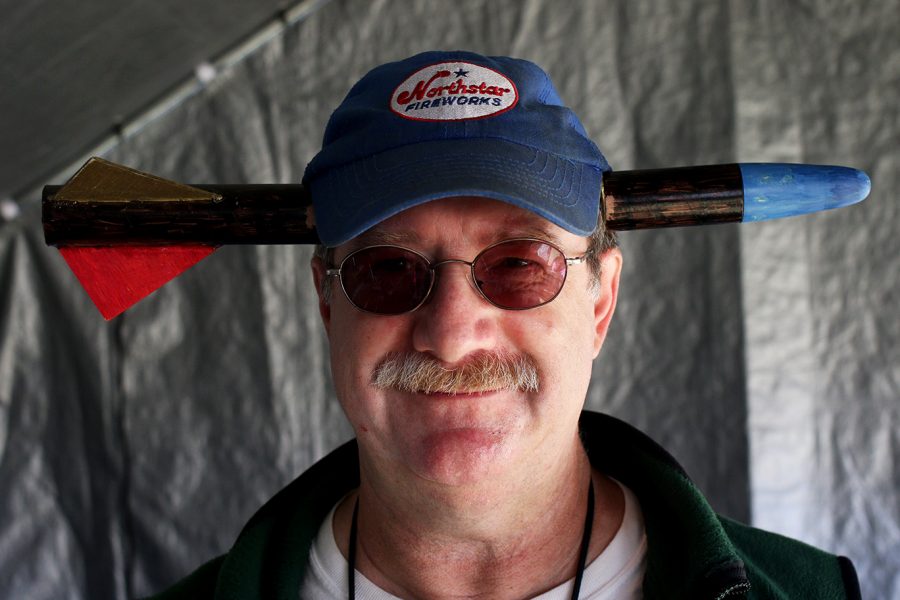 Howard Drukerman, Champlain chapter president of the National Association of Rocketry, shows off his hat at the Champlain Mini Maker Faire on Sept. 27

The horse barn at Shelburne Farms welcomed local inventors Sept. 26 to 27, who came to show the Champlain area how their inventions will “make” for a better future.

This year’s Champlain Mini Maker Faire, partially sponsored by the UVM, was comprised of over 40 innovators of all ages from across New England.

Maker faires are part of an international movement aimed at providing awareness and exposure for local makers, crafters, inventors, scientists and  artists, according to the Champlain Maker Faire’s website.

“A maker faire brings together families and individuals to celebrate the do-it-yourself mindset and showcase all kinds of incredible projects,” according to the website.

Students in the College of Engineering and Mathematical Sciences exhibited their recent innovations such as an inexpensive prosthetic limb made from a 3D printing machine called the Fab Lab.

Since these limbs are cheap to make, they are  well-suited for a growing child that may need different sizes throughout childhood, senior Aaron Brunet said.

The prosthetic limb imitates a human limb in various ways including the tendons, Brunet said.

“The idea is we give them to local kids at the University of Vermont Medical Center,” he said.

It takes about 48 hours to print the prosthetics, Brunet said.

The creation of the prosthetics are part of a global network of volunteers, called E-Nable,  who use 3D printing to make cheap, accessible prosthetics, he said.

Just outside the barn, a rocket shooter launched dozens of homemade rockets, individualized in decor by children of all ages.

Schwartz said he built the rocket launcher three years ago after seeing his friend build one.

Together, they built three, he said.

“The rocket will launch up 100 to 200 feet depending upon the air pressure,” Schwartz said.

In addition to this invention, Schwartz said he has started his own business.

He won the faire’s “Road Pitch Competition,” – a competition for the best business pitch, he said.

Along the edges of the faire, various rockets were displayed as part of the National Association of Rocketry booth.

Howard Drukerman, president of the Champlain Model Rocket Club said the interesting part about the rockets is the size of their engines.

“There are a variety of rockets, from very small ones all the way up very large in diameter and height,” he said.