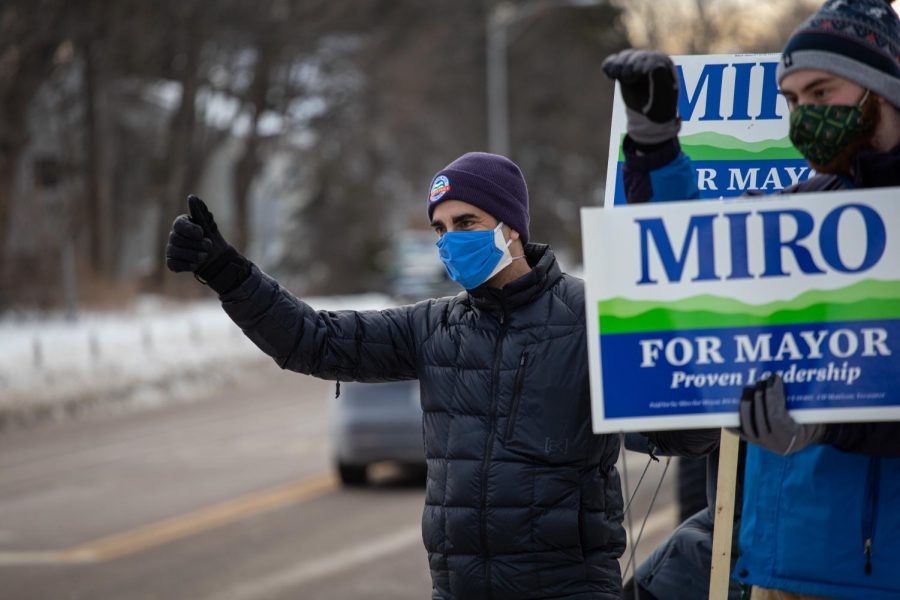 The now four-term Burlington Mayor Miro Weinberger stands on North Ave during a “honk and wave” with his supporters Feb. 19. As cars passed by they honked in support.

Democrat Mayor Miro Weinberger has won a fourth term by a mere 129 votes, according to the unofficial results provided by the city.

Weinberger, who has served as mayor for nine years, came in with the most votes at 8:18 p.m., a little over an hour after the polls closed.

Weinberger claimed 6,189 votes of the 12,249 ballots cast, winning by less than one percent of the vote.

Approximately 35% of Ward 1 and 14% of Ward 8, wards made up of mostly student voters, cast votes for Weinberger. City leaders have admitted Ward 8, which encompasses UVM’s campus, was gerrymandered in 2015 after the redrawing of voting districts 5 years ago, according to a Feb. 26 Cynic article.

Runner-up Progressive Max Tracy received 54% of the vote from Ward 1 and 80% of the Ward 8 votes.

Exactly half of the Wards went to Tracy and the other half went to Weinberger. Wards 4, 5, 6 and 7 all voted for Weinberger, while Wards 1, 2, 3 and 8 all voted for Tracy.

In the 2018 election, Weinberger took nearly 50% of the vote against Progressive candidate Carina Driscoll, a significantly bigger margin than against Tracy.

Burlington residents also voted in favor of several ballot items, including a just cause charter change that will make it more difficult for landlords to evict tenants.

Other results from the election include:

This story may be updated.