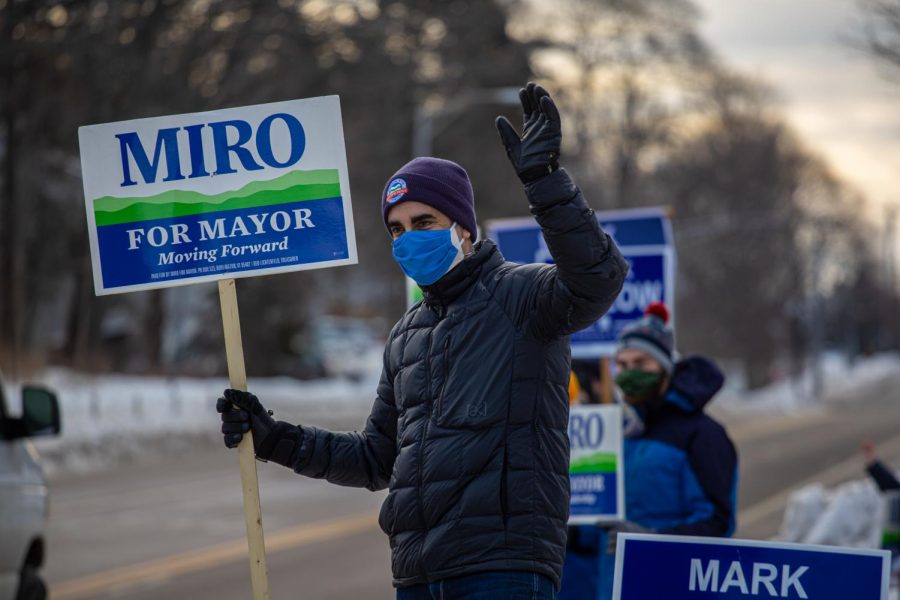 Burlington Mayoral incumbent Miro Weinberger stands on North Ave during a “honk and wave” with his supporters Feb. 19. As cars passed by they honked in support.

With almost a decade of experience leading the city, Burlington Mayor Miro Weinberger said he is best fit to serve another term despite competition from a Progressive and several independent candidates.

Weinberger, a three-term Democrat, has served as mayor for a total of nine years and said his experience in office furthers his ability to continue as mayor.

“I think my proven leadership experiences, having been in this office for nine years, is really the defining difference between me and the other candidates,” Weinberger said.

He said that since Burlington is “essentially in the middle of a crisis,” it’s best to stick with a team of people that have “led the city very well.”

“Over the last year, Burlington has been one of the safest places in the country,” he said. “Change is very sensitive at this time, to bring in someone with no experience would have to learn on the job, I think that’s the biggest issue in this race.”

During the surge in COVID-19 cases last year, Burlington had relatively low positive numbers even with the influx of returning students, something Weinberger says did not happen by chance.

However, Weinberger warned some of the most crucial moments are yet to come.

“One of the key goals throughout this pandemic has been to ensure that the hospital never gets overwhelmed and we’re nowhere near that,” Weinberger said. “Where I see where we’re at, we have basically one to two months of critical weeks when we are trying to keep the virus from spreading until we can vaccinate everyone.”

Weinberger also mentioned that he has been in close consultation with UVM President Suresh Garimella, who he said has earned “quite a bit of credibility” for how smoothly the fall semester had gone and how well UVM students performed.

When asked about one of his leading opponents, City Council President Max Tracy, Weinberger said Tracy’s professional career has dealt with little management experience and that the two have different views when it comes to budgeting.

“I think the city council created a real crisis last summer in cutting the police budget by police cutting the number of police officers 30% without a plan for how we would continue to respond to the 30,000 incidents a year that take place in this community,” Weinberger said.

Many Burlington residents have criticized Weinberger’s track record on policing. Last fall, he was confronted by hundreds of protesters, many college-age, who lay outside his house demanding he fires three Burlington police officers involved in use-of-force incidents, according to a Sep. 8 Cynic article.

The City Council later came to a separation agreement with one of the three police officers that were accused of using excessive force, according to a Sep. 22 VTDigger article. However, the other two remain on the force.

The Burlington Police Department came under more fire during Weinberger’s time as mayor when three brothers filed a lawsuit against the department in May 2019 for excessive force after body camera footage showed officers pushing and tackling the men.

Additionally, a report issued by the department in 2019 shows that they disproportionately use force on Black residents, according to a December 2019 VTDigger article.

Another controversy arose in December 2019 when the police chief stepped down after admitting he created an anonymous Twitter account to troll local activists, according to the same VTDigger article.

Nonetheless, Weinberger said Burlington must treat racial justice as “a public health emergency… as we have brought to the pandemic and the opioid crisis,” according to his campaign website.

Although protesters in the fall and summer pointed the finger at Weinberger for not taking more action on police reform, the mayor said the protests that took place last summer across the country were long overdue and represented a defining moment for the nation.

“Both my daughters are children of color,” Weinberger said. “And I want to be able to say to them after I’ve done this job, whether that’s next month or three years from now or whenever,  that I worked to make Burlington a better place for all Burlington children, including children of color.”

In terms of housing, Miro claims that, during his tenure, more than 1,300 homes have been built, twice the number of homes built in the nine years before he was elected.

“To me, that was really right to the heart of certainly any student who is thinking about staying in Burlington after graduation,” he said. “We are going to be a more calm and affordable community by being a place where there’s greater balance between wages and rents, by creating as many new homes as we can for people of all backgrounds.”

Weinberger thinks his opponent Tracy would backtrack on the creation of new homes and would “make things worse.”

“He is not committed to the creation of new homes that I think has really served the people of this community,” Weinberger said.

Weinberger also said his successful record on climate change policies makes him a good fit for the job.

In 2019, Burlington officials set a plan to make Burlington a “net-zero energy city” by 2030, which would entail converting burning fossil fuels to renewable sources, according to a Sep. 10 2019 VTDigger article.

“I don’t think there’s any city in the country that has done more to address the climate emergency over the last nine years in Burlington,” Weinberger said. “I’ve got a record of achieving those goals, and that’s what I offer, continued progress on that over the next three years.”