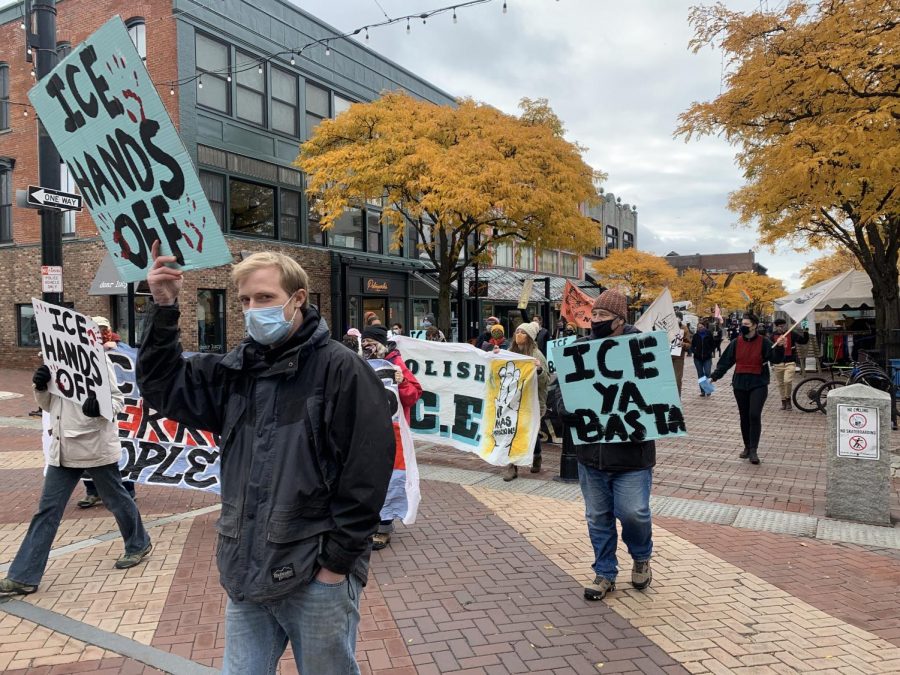 “Stop the raid, stop the fear, immigrants are welcome here,” chanted the group of nearly 80 people as they marched down Church Street.

Members of Migrant Justice took to the streets of Burlington, marching down Church Street to celebrate the settlement of a lawsuit with the U.S. agency in charge of immigration enforcement.

Migrant Justice, a grassroots organization of dairy farmworkers in Vermont that fights for immigrant’s rights, walked, settlement in hand, from their office in Burlington to the federal courthouse, ending a two year battle with Immigration and Customs Enforcement.

The suit, filed in 2018, stated that ICE and the Department of Homeland Security allegedly engaged in an operation surveying, harassing and targeting the organization’s members and leaders because of their proximity to the group, violating their First Amendment rights to freedom of speech and assembly.

“Stop the raid, stop the fear, immigrants are welcome here,” chanted the group of nearly 80 people as they marched down Church Street.

Plantiffs Enrique Balcazar, Zully Palacios and Victor Diaz joined Migrant Justice as plaintiffs in the suit, all in deportation proceedings after having been detained by ICE.

The settlement includes an agreement not to deport the plaintiffs, allowing them to remain in the United States and obtain work permits.

After ICE targeted Balcazar for weeks, watching his house and his car, he was held in detention for 11 days.

“Finally in March of 2017, I was arrested alongside Zully Palacios as the two of us were leaving the Migrant Justice office,” Balcazar said. “When I was brought into prison, the ICE agents laughed, making fun of us, saying ‘here, we brought you a famous person.’”

During the rally, a man attempting to drive through the street protestors were blocking, opened the door of his car, pulled out a machete and threatened the protestors with it.

The protestors moved out of the way, made a path for him and he dangerously sped through them. No one was hurt or hit.

“What we saw just now is a clear example of what happens when the people rise up to defend their rights,” said Migrant Justice member Thelma Gómez after the man sped off.

“Not everybody is going to like it, but we can’t be scared and we can’t retreat. We have to continue forward defending our human rights,” Gómez said.