More cuts across colleges may come, says UVM board of trustees 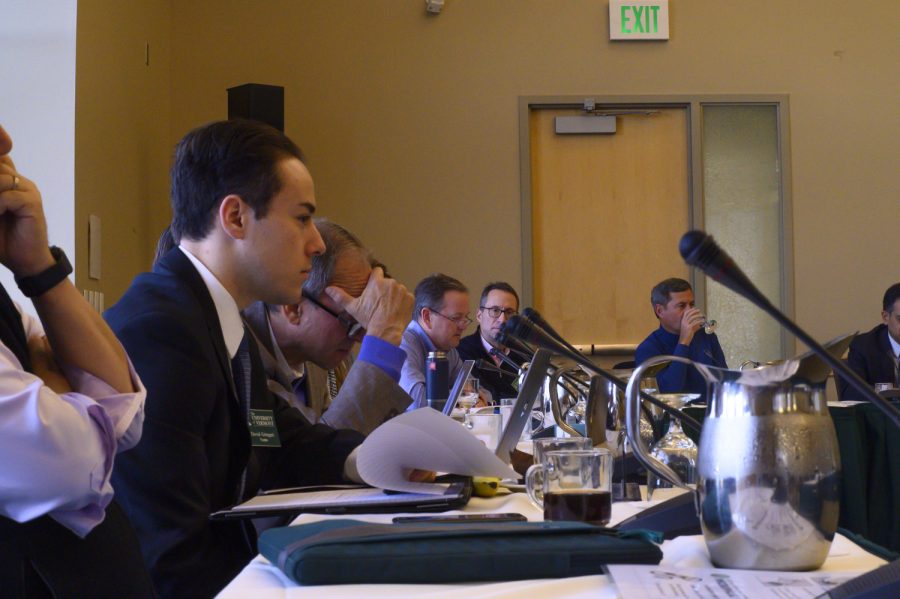 More cuts to majors, minors and departments may come after UVM’s board of trustees pushed forward with plans Friday to reevaluate low-enrollment programs across the University.

During the board’s first meeting of the year Feb. 5, trustees met virtually where they approved President Suresh Garimella’s tuition freeze for the third consecutive year and discussed further budgetary cuts across the University.
After slashing major and minor programs, provost announces more may come
More colleges may see program cuts in the months to come as all UVM colleges are forced to review and deactivate low-enrollment and low-completion programs.

In the Provost Report to the board, Provost Patricia Prelock announced the decision, explaining that this review would likely be a continuation of cuts to the College of Arts and Sciences, which included the termination of 12 majors, 11 minors and four masters’ degree programs.

“This is an important process in which all colleges and schools should engage regularly, not only in response to our current fiscal challenges, but also as part of on-going quality assurance efforts ensuring the maintenance of our most important programs.”

“Everybody’s looking at this, it’s just that Dean Falls was a little quicker because he’s been dealing with this for a long time,” Prelock said in her remarks to the board.

Prelock, Falls and Garimella remained adamant that any cuts made would benefit the University, and that students would still be able to take classes previously associated with cut programs.

“Since all of this has occurred, Dean Falls reports some significant collaborations and discussions among these chairs and departments initiating really creative ways to capitalize on their resources and expertise,” Prelock said. “Several departments are looking at how they might combine where there are natural synergies.”

At the same time, the board introduced a new doctorate program and a new bachelor’s degree program.

The group approved a proposal for a new entry-level doctorate in occupational therapy from the College of Nursing and Health Sciences to be rolled out in the fall of 2022, and the creation of a Bachelor of Science in Community Centered Design in the College of Agriculture and Life Sciences.

Conversely, the board of trustees approved a resolution to terminate the Master of Science degree program in Bioengineering in the Graduate College.
Garimella announces tuition freeze
Despite UVM’s mounting budget deficit, the cost of tuition will remain frozen for the third year in a row, announced President Suresh Garimella during the board’s budget, finance, and investment committee meeting.

The tuition freeze is a big accomplishment, especially with budget issues, Garimella said.

“This is the right thing to do,” Garimella said. “I’m very proud of the board and all of our staff that were able to propose something like this. I think it’s really quite monumental and I hope we all understand the gravity of what this means to our families.”

The board also approved the continued construction of a multi-purpose center, which paused construction due to COVID-19 restrictions, with a budget of no more than $22.5 million with costs covered by gifts to the University, bonds and University reserves.

“UVM is looking at structures because the administration obviously wants to deliver the highest value experience for students and create competitive advantage for the University,” said Don McCree, chair of the budget, finance and investment committee.

The construction is continuing despite the fact that the University as a whole is suffering financially, said VP of Finance Richard Cate.

With an estimated $35 million in revenue losses due to COVID-19 and another expected loss of $10.15 million over the next two years, along with a years-long structural budget deficit, UVM’s current budget is unsustainable, Cate said.

“We’ve taken about $50 million out of the budget over the past 10 years or so to balance everything,” Cate said. “We can do that for quite a while, but we can’t do it forever.”

However, the multi-purpose center will bring more money to the University despite its costs, McCree said.

“We will continue to attract the best and brightest students that we possibly can and stay very creative in terms of the coursework that we’re delivering into the student body,” he said.
Faculty and students protest CAS cuts during meeting
Students and faculty voiced their anger to the board during the brief public comment opportunity in response to budgetary cuts in the College of Arts and Sciences.

Geology professor Charlotte Mehrtens raised concerns about the elimination of her department, which would make UVM the only level one University in the country without a geology program.

“Eliminating the geology department would send a message to researchers that UVM doesn’t value research in geology,” Mehrtens said.

Senior Cobalt Tolbert shared the outrage of his professors, saying he believes the cuts being made to liberal arts and science programs are financially unnecessary and harmful to the quality of his education.

However, when the meeting shifted to discussion of committee reports, trustee Carolyn Dwyer, stated that the termination of programs with low enrollment is important to the school’s ability to boost those that are thriving.

According to trustee Don McCree, UVM is headed for another down year in revenue. However he pointed out that students will not have to make up that funding, as tuition and room and board are projected to maintain flat rates.
Students voice concern over pandemic’s toll
The board of trustees discussed heightened concerns about the pandemic this semester and food insecurity among graduate students during its Committee on the Whole meeting.

In presenting the Student Government Association report, SGA President Lana Al-Namee said she has gotten feedback from the student body that they are becoming more nervous about the pandemic this semester, and about academics given that there are no breaks this semester.

“Students are kind of feeling anxious,” she said. “Definitely different energy is what I’m feeling for my students but, nevertheless, we’re still able to realize the goal at hand, which is just to get through the semester and hopefully make it all the way through.”

Several trustees brought to light how important the option of recorded lectures is during the COVID-19 pandemic to ensure that students who are affected by coronavirus do not fall behind, which Al-Namee echoed.

Currently, professors are not required to record their lectures.

“Unfortunately, not all classes are following that standard,” Al-Namee said. “One of my professors said they’re not going to be recording any classes.”

Project Coordinator Avery Rasmussen also brought the board’s attention to the prevalent issue of food insecurity among students at UVM.

Rasmussen said that 24% of grad students are having trouble paying for food and 27% are struggling to pay for rent, according to a poll from this fall.

“Food insecurity, though already a real issue among UVM students, has only been exacerbated by COVID-19,” she said.

Rasmussen runs programming that aims to bring support to these students, reallocating some money from the budget toward a newly created food insecurity budget in collaboration with several groups within UVM.

This funding went toward a food and grocery gift card drop-off as well as a drop-off of information about other local resources.

“That went to 100 graduate students, that was the max we could do with our funding, and it filled up,” she said. “So there’s clearly a need there.”

She stressed the importance of paying graduate students a livable wage so that UVM can recommit to student success.

“It is really important that we pay grad students a livable wage, making sure their basic needs are met, if we want to improve our recruitment of grad students and give them an experience where they can really thrive,” she said.