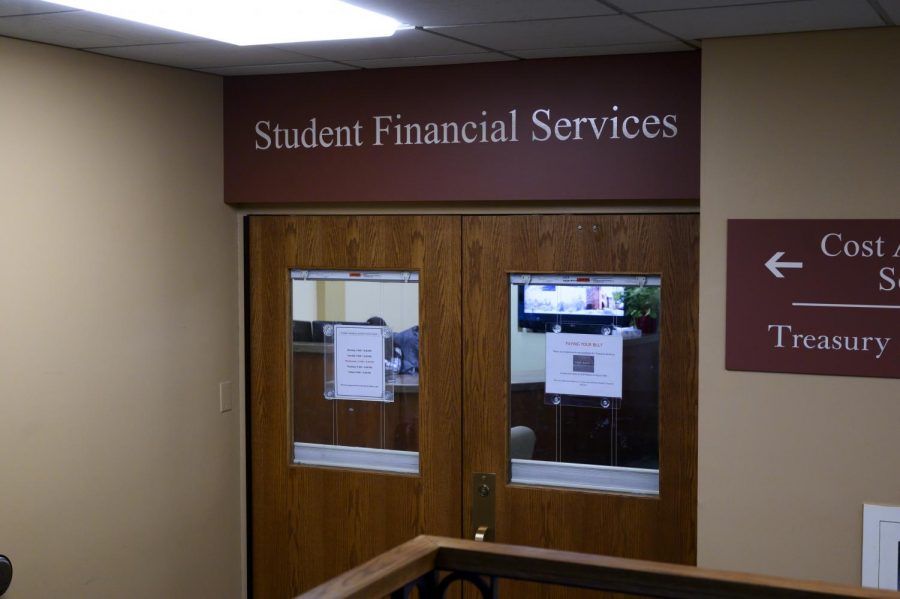 An employee of the Student Financial Services office sits behind their desk, Jan. 15. The office is open 9 a.m. to 4:30 p.m Monday through Friday.

UVM, the flagship public university of Vermont, has one of the highest in-state tuition rates among U.S. state universities.

Across the board, Vermont public colleges and universities, including UVM, have the highest tuition rates of state colleges in the country, according to the College Board’s 2019-20 Annual Survey of Colleges.

But over the last five years, 44% of in-state students have had their tuition covered in full.

The biggest reason for the University’s price is it’s lack of state funding, said Marie Johnson, director of Student Financial Services at UVM.

“Being a small rural state, we don’t have big business to help fuel tax revenue,” she said.

Forty-four percent of in-state students received free tuition for the 2018-19 school year, according to SFS. Within the 44%,12% are dependents, children of UVM staff or faculty.

A student whose parent has worked at UVM for at least one year can get a four-year degree at UVM without paying tuition, said Richard Cate, vice president of finance and University treasurer. This includes any faculty member, from professors to custodial staff.

The remaining 32% are based on need or merit, he said.

“Vermonters in general, and certainly people in the legislature, often have a certain skepticism when it comes to higher education,” he said. “They’re more likely to want to put money into job creation, and that’s a battle that I fight every day in the statehouse.”

The high cost of tuition for students is also a relevant issue in the statehouse, Baruth said.

“Vermont is not a wealthy state,” he said. “I often hang my head in shame at how little we support higher education.”

UVM gets much less than many other state universities, Cate said.

However, UVM is still able to give aid to students and keep the University afloat, Cate said.

“We have enough to continue to give financial aid,” he said. “There’s not a lot of extra money around, but we make it work.”

Approximately the same percentage of in-state students have received free tuition over the past five years, Cate said.

The total amount of aid given to the University depends on the yearly price of tuition, Cate said. “The University gives back $160 million a year in assistance or financial aid to students,” he said. “As tuition goes up, that number goes up too.”

With next year’s tuition freeze, the University will still give out the same amount of financial aid, Cate said. “It probably will not rise because it shouldn’t need to,” he said. “It never goes down if it goes anywhere.”

However, education in Vermont is still too expensive and often unaffordable for many Vermonters, said junior Leah Kelleher, a recipient of a tuition-free scholarship.

“I think that public college should be a human right,” she said. “I think it’s such a shame that there are students where education is not even a possibility for them because of the cost.”

UVM should also do more to make sure prospective students are aware of the scholarship opportunities available, she said.

“I think the University could do more to build those relationships,” she said. “There are still so many Vermont students who I’m sure would think about college a little more if it was more affordable.”

In order to make in-state students more aware of the scholarships and grants available, SFS connects with students all over the state, Johnson said.

“Staff will go out to talk about applying for financial aid to encourage higher education,” she said. “It’s about making those personal connections.”

Options include the Catamount Commitment Program (CCP), a program that pays all tuition costs and fees for students with the federal Pell grant, and the Green and Gold Scholarship, a program for Vermonters who graduated high school as valedictorian.